JOURNEY INTO OUTER SPACE 6YR OLD My son's class had just finished learning about the solar system so it was perfect timing to have a Journey into Outer Space party for his 6th Birthday. As an added bonus Discovery was successfully launched on the day of his party 4th July 2006, so there was plenty of news coverage and interest about space travel!

CRAFT ACTIVITY ON ARRIVAL: When his friends arrived they were all given long sleeve t-shirts with a picture of a rocket and their own face peeking out of the rocket ship, which I had printed onto an iron on transfer then onto the shirts. I had a whole bunch of fabric pens and I asked them to draw the solar system. I had books and a model of the solar system on the table to help them. They loved it and especially loved that they had their own photo on their shirt. The kids put on their shirts, as their astronaut uniform and I divided them into teams of three (because only three people can fit on the re-entry shuttle).

Then they entered the NASA SPACE TRAINING CAMP. I really wanted to build on their knowledge and have some fun educational science activities for the kids. I had turned the play room into a space camp with different activities set up in the room, which they had to rotate around in their groups. From the NASA website for kids http://edspace.nasa.gov/astroschool I found it listed different buildings they have at NASA for training. So I set these up for the activities. At the Astronaut Corps HQ I had three huge bowls of foil confetti with pictures of the space shuttle flight sequence buried in the bowls, and their names were on the other side. They had to find their pieces and lay out all the pieces from all the team players on the table. Then together they had to work as a team to figure out what the flight sequence was from the pictures, put them in the correct order and check them in a separate envelope which had the answers.

For the ROBOTICS LAB we had covered the castle in the room with tin foil (castle was from last year's party which we built into the room) with a junk robot my son had made at the door of it with a big sign saying Robotics Lab. They had to enter in the foil door into the lab and there we had a lever arch digger used for sandpits. We said that when the astronauts had to fix the space station they had to use robotic arms, which was hard to use like the lever digger. They had to move as many plastic space bugs from one tin container to another tin container swivelling around and controlling the arm up and down. This required some concentration and it looked easy but was a lot harder than they thought when they tried it.

Next station was the SURVIVAL TRAINING- here I had downloaded this activity of from the NASA KIDS website (http://www.nasa.gov/audience/forkids/games/G_Guess_the_Space_Food.htm) of what astronauts eat. I printed these pictures and they had to try and work out what food it really was. I was on this table so then I asked them how they went to the bathroom in space and showered, without floating away. They thought this was hilarious, and after a few guesses I showed them the photos from an Usborne Beginners book of Living in Space, and explained how everything was very different in space!

Then they moved onto the SPACEWALK CENTRAL. Here I set a water table, which was split in the middle. On one side it was empty with nuts and bolts which they had to put together in the air. Then on the other side it was filled with water which they had to put on rubber gloves and then put the nuts and bolts together. It was to demonstrate that when the astronauts really fixed the space station it was without gravity and was difficult with gloves and was similar to working underwater. I also explained that for real astronaut training they work in water to practise.

When they had finished these activities they had to move onto the THE FLIGHT LINE. I had a fridge box which I had painted on the three sides a picture of Discovery rocket, with a door in the back. They had to line up here and as a team climb on board and all squish in. I had a 3 foot real model of the Saturn V next to it. I pressed the button on the model and it had a recording of the countdown, and it was very loud so they could just hear it inside their box.  Their first mission to space was to the moon, where they had to collect a moon rock sample and bring it back to the rocket. They had to get out of the rocket and moon walk down the hallway to another room. We had taken all the furniture out of this room and unhinged the door, and completely covered the walls with black builders plastic. Then we had stuck as many glow-in-the-dark stars, planets, space ships etc on the plastic.

On the floor we had hidden the moon rocks. I had bought some smooth polished rocks, and covered them with red star, glow-in-the-dark stickers. It looked awesome because all the glow-in-the-dark stickers on the plastic walls were green but the moon rocks glowed this red molten colour. The kids loved it and actually asked to take their special rocks home.  They went into the room one by one, and then once everyone had reported back to the rocket with a moon rock, they reported in to me. I had them all gather round and I said they had successfully completed their first mission to space, so now they were real astronauts.

We had a mock ceremony and they were each given an astronaut NASA id card on a lanyard which I put around their necks. They had their photos on it and said they were astronauts of NASA. Each child was applauded and I gave them a gift, which was a glow stick. I said they now were ready to visit all the planets in the solar system. We moon walked back to the dark room, where they had to lay on the carpet and hold their glow stick up, and watch a National Geographic slide show of a trip through the solar system, which was projected on the ceiling. The cd commentary that went with it was great, so as they were going through the astroid belt they had wave their glow sticks around like comets in time to the music, and then use their glow sticks to shine the way through each planet. They loved the glow sticks!

Then I had them all land and hop into our re-entry shuttle, to head back to earth. This was our cars and we drove them over to a building in the back yard which was Earth and we had all the tables set up with the retro rocket plates and cups set. After the meal we headed back into the shuttlesand we were going to do some planet hopping. This was the

GAMES: The first planet we visited was Saturn and we had a Saturn pinata. This took forever to break, so we ran out of time for the other game. Another game we had planned was visiting Mars, and we had made a paper machie Martian, with big eyes and a big mouth. I was going to put it in the middle of the dark room with Mars projected on the ceiling and M & M's sprinkled on the floor around the Martian. Then I was going to call out a color and they would have to pick up that colored M & M using just a ice block stick in one hand and their glow stick in the other hand. Then carry the M & M over to the Martian and put it in his eye, and after collecting three they could pick out a Mars bar from his mouth. He was such a cool looking Martian, my son has kept him in the playroom. Then for their loot box, I had ordered these great Space boxes online, which had photos of astronauts and rockets blasting into space which were actual pictures from NASA. Inside their boxes I had the usual treats, but I also found this floating putty, which was in a plastic Saturn, and was a big hit with the kids, I found out later.  All in all it was quite a bit of preparation, but I really loved planning it. The kids (and parents) are still talking about it, and everyone had a blast!! 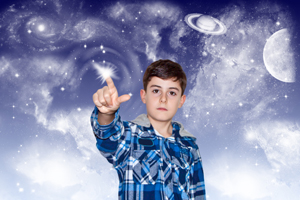