Sonic the Hedgehog:  Sonic and friends is a popular TV show and video game character, so when my 6 year old wanted a Sonic Party I thought, no problem.  Wrong!  After combing the internet I could find NO party ideas, not to mention paper goods, invitations, etc at the local party store.  So it had to be a total creative effort.

First I thought about the theme and decided that since all the kids (mostly boys) were really into video games (especially Sonic) we would focus on that.  I created invitations using various clip art available on the internet advising them to come prepared to have fun as their favorite Sonic character.

I decorated in the colors of the main characters, red, blue and yellow.  An artistic friend created a work of art of a cake with the three main characters, Sonic, Knuckles and Tails.    We rented a moon bounce and set up the backyard for outdoor fun.  When the kids arrived I had them choose the character they wanted to portray and then pasted a large sticker on their chest, dubbing them that character for the day.  The kids loved it!.

After a bit of bouncing, I announced that we were going to pretend we were in a video game and they were the characters they had selected.  I told them this was a brand new game called Sonic Adventure 7 (birthday boy was 7)  that consisted on several progressively more difficult levels.

The second level was running an obstacle course set up around the back yard twice.  Each time they earned 3 rings for a total of 6 rings (found in the wedding supply section).  The course consisted of weaving through cones, walking 2x4 planks, dancing through hula hoops layed out on the ground,  throwing balls through hoops, crawling through tunnels, jumping hurdles, dodging large balls, shooting air rockets and shooting basketball hoops.

Level three was retrieving pieces of the master emerald that Dr. Eggman had placed in balloons.  First we stomped the balloons in the driveway (concrete did a lot of the work) then scrambled for the results.  The fourth level was the obstacle course again, only this time they had to first go through as fast as possible, then had to go through backwards.  They results were hilarious.

Finally, we came to the "boss" level.  They ran the obstacle course as fast as possible while all the adults chased them with silly string, bubble guns, balls, etc.  Then we had them choose sides.  Some kids wanted to be the "bad" guys, some the "good" guys, with a good old fashioned water balloon fight.  We all got pounded!  After that it was cake and ice cream while cooling off to watch a Sonic video, then open presents and have a pinata.

The party was so much fun no one wanted to leave and days afterward all the kids and parents were talking about it was the most fun party ever. 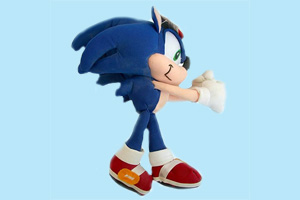