My soon to be 9 year old little girl loves Spongebob!  This is her 3rd party with a Spongebob theme.  The 1st two parties were just the basic supplies, but because this was to be her last birthday in the single digits, I wanted to go all out for her.

For the invitations, my 11 year old son folded yellow sheets of paper and drew SB's face and for his eyes, he made them 3D, he made them spring out so that really got the kids attention.  On the inside of the invitation, I made a wavy blue sheet (water effect) and listed our menu: Krabby Patties w/kelp (cheeseburgers w/french fries), ocean blue drink (Hawaiian Punch w/Sprite), cake and sundae bar.

For the activities I listed (and we did): SB face painting, my 11 year old son (the only boy that day) drew whatever character each girl wanted, he drew SB completely on my daughter's face!  While we were waiting for each girl to attend the party, I had them color their favorite character and then as they were done with it, I hung them on our SB decor.

We also did a Krabby Patty Diner Dash.  There were 4 teams of two girls, one had to place the order (I made a list of ingredients and supplied them w/SB pens) and the other girl had to get their order.  They had 3 minutes to complete as many as Krabby Patties as they could and they had to be right in order to win a prize.  I made the Krabby Patties out of felt, the hamburger buns were a light brown material and filled with cotton filling.  My daughter sewed all of the buns by hand.  The meat was a dark brown leather material and then I used a Sharpie to draw in the cooking effects.  The lettuce was a bright green silk material.  The pickels were cut using crafty sissors and dark green material.  For the onions I used sheer white silky material cutting them in a sprial, they really looked lifelike.  The ketchup and mustard were red and yellow strings of yarn, and for the cheese I used a yellow material with a dimple effect. This activity was really fun, we ran out of prizes but the girls still wanted to play this game.

I then had them do a Search A Word based on my daughter's favorites, the first person to get them all or with the most completed won a prize.  They also loved this activity because they learned more about my daughter.  Another activity we did was "Pin the Nose on Squidward".  My son and I drew Squidward on a large thick piece of posterboard.  I had each girl do this one at a time but while one girl was doing this (blindfolded with a pair of goggles) the other girls had to be looking the other way, so at the same time we played SB says (Simon says) and they loved that.  It was more challenging for them to pin the nose on Squidward because they did not get to have a chance to see it until the last girl was done and I revealed the drawing to them.  We ran out of time but I also had planned for them to do a SB spelling contest.  I came up with 264 words that could be made out of the letters in Spongebob Squarepants.  The girls were wanting to call their parents so that we could play.

For the decorations (this is where I received a whole bunch of "oooooohs and aaaaaaahs"):  I turned our family room into Bikini Bottom.  I completely covered our walls and sofas with blue tarp and placed about 200 SB foam stickers and sea creatures all over the tarps (except for the sofas).  One of the walls is a wall of windows with shutters, I opened the shutters from behind to let the light come through and it really gave the tarps a true effect of being in the water!  Our wooden floor was covered with blue tarps here and there, again with SB foam stickers and sea creatures.  The best part of the decor:  I used the spongepuffs that are sold at Wal\*Mart or Target and come in different colors and took them apart, they hung from ceiling to floor.

Once the girls walked into our house and moved to the family room area, they had to fight the "kelp" to get through.  I used ocean colors along with a few yellow.  Once they got through they were able to see that they were in the ocean to see the huge jellyfish I made out of my ceiling fan.  I placed the spongepuffs on each blade and pulled half of it over onto the other blade to give it the puffy effect of the jellyfish!  I then had purchased ponchos from the Dollar Store that were in the perfect blue and green colors.  So I used those to go along with my boxes that I use for my remote controls, they are like little treasure boxes, so I placed a poncho on top of two stacked boxes and then placed beaded neacklaces on areas of the boxes, and I also placed a $1.50 kalidescope to make it seem like a spyglass used to hunt treasure.  I used the other ponchos along the activity table taping sea creatures to them, used them on my computer to hide it and place sea creatures with it.  I also bought Little Mermaid pens that came with tiny boas and placed those along the "nets" (ponchos) to make it seem like tiny fishes were caught.

For the prizes:  I didn't want the girls to see the prizes beforehand and start to get picky about want to win and play.  So I wrapped each prize (20 prizes) in SB colors and placed a SB foam sticker in the middle of the prize.  On the bottom left hand side of the prize, I placed a different sea creature or SB character on it.  I made a small acquarium out of the container that was filled with the SB foam stickers and I taped blue wrapping paper so that you see the blue from the outside.  I put sea creatures on the wrapping paper so that it looked like an acquarium.  In that acquarium was the matching piece to the sea creatures that were placed on each of the prizes.  So for the 1st, 2nd, and 3rd place winners, they each had to draw a sea creature from the acquarium and find the matching wrapped prize.  Then they opened it and at the end of the party, I told them they could exchange it with another winner if they wanted.

Only one exchange took place.  Then I had two prizes leftover, so at the last minute I decided to give the first girl that arrived to the party the last prize I wrapped, and the other prize which was the first prize I wrapped I gave it to the last girl who showed up, which worked out really well because the last girl showed up at 3:40 (the party was scheduled to end at 4:00), she had to attend a piano recital and her mom was kind enough to bring her even though there was only 20 minutes left.  When she walked in the other girls told her she had one last chance to win a prize because we were about to play musical chairs (I used SB CD).  Everytime a girl would come out of the musical chairs, I would let them control the music, they really loved that little power.  Well it turns out the last girl to show up did not win that game, but when I told them about the last two prizes, everyone's face lit up when they learned she did get to win a prize after all.

For the goodie bags, I bought 2007 calendars with dogs, kalidescopes, SB waterfiller game, necklaces, SB pens, and SB folders.  I used blue gift bags and decorated each one using a piece of the spongepuffs and taping sea creatures to the puffs to give it the "fish getting caught in the net" effect.  We wanted to decorate our front door with a poster of SB, but Wal\*Mart ran out of it, so I bought the largest gift bag of SB and cut it out, which gave me one side of SB, and the other was Patrick.  I taped them on the front door and placed the "netting" and sea creatures all over the door to give them a hint as to what they are about to enter.

As each girl walked in, I took a photo of them with my daughter and at the end of the party I took a group photo.  Then I downloaded them to the Wal\*Mart photo center, picked them up, placed them on our thank you notes (which was made with a little of the netting, SB foam and sea creatures and mailed them off.    The next day at school (party was on a Sunday), my daughter tells me that her friends kept talking about how much fun and what a great party she had for her birthday. 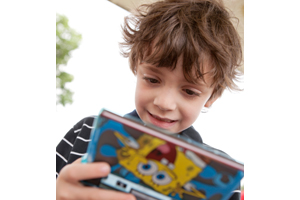