Tennis anyone?!  My daughter started taking tennis lessons about a year ago so for her 7th birthday she wanted a tennis party.  After searching the web, I quickly realized that tennis is in the minority as far as popular sports these days so I was going to have to make everything myself!  No worries, I love to DIY my kids parties, it’s cheaper and makes it a lot more enjoyable for me!  I finally settled on a pink and green argyle preppy theme and set to work.

INVITATIONS: I collected empty tennis ball cans from her coach and the discarded ones on our local public court.  I then peeled off the label leaving a clear can.  I then measured the can and came up with the size of paper I needed.  We had taken her to the court for a photo shoot (that we did ourselves, nothing fancy) and I used a couple of the images on the front of the paper.  The invitation itself read We’re SERVING up some fun at Karsyn’s 7th birthday party!” and the location and time.  It also said GAME SET MATCH and then WE’LL HAVE A RACKET OF A TIME.   I put the paper inside the empty ball can, put the lid on and mailed them out.  NOTE: if you decide to do this, when you peel the label it leaves a sticky strip the length of the can.  We discovered that brake cleaner, while certainly smelly, takes it off FAST and easy!  It doesn’t cloud the plastic either so it’s perfect!

DECORATIONS:  The decorations were all various tennis related things.  I found a crisp image of a tennis racket and made several copies of it.  I cut them out, spray mounted them to foam sheets and hung them around the house.  I also got some pink pom-poms from Michaels that fit the décor very well.  I handmade a Birthday Banner with glitter glue and tissue paper.  I also decided to blow up several of the photos from the photo shoot, they were too good not to, and hung them on the wall.  Enlargement are super cheap at Costco or Wal-Mart.  I also made a huge banner (I’m talking 5 feet tall!) for the front door that had one of the photos on it and it said Happy Birthday.  For the front yard, I went to the thrift store and bought a cheap old racket.  I got a bunch of balloons and tied them to the top of the racket and then taped a stake to the handle.  I put the stake in the ground in our front yard as a sort of “the party is here without saying the party is here!  There was no mistaking where the party was!

Food Table: I found some large plastic cylinder vases on clearance at Michaels that I just put a bunch of tennis balls in and used them as decoration on the food table.  I made some stickers that matched the invitation that said Happy Birthday on them to decorate the vases.  I found some perfectly colored green tubs at Dollar Tree and put stickers on those as well.  For a tablecloth, I got two yards of green felt and some white canvas tape (this is super expensive tape, you can use duct tape and it’s way cheaper!).  I used the tape to mask out the lines of a tennis court.  After the food was arranged on top, it looked like a court!  I would put clear vinyl over the top if I did this again to protect the felt, it got pretty dirty!  For the main centerpiece, my architect husband made a tennis court out of basswood.  It had a small lip to it and we filled the ‘court’ areas in with green mint M&M’s.  This was perfect as they not only were a great centerpiece but they were great as an after meal mint too! GIVEAWAYS:  For giveaways, I took tennis balls and cut off the top of each ball.  Since they are hollow, it makes for a great spot to put goodies in.  For the girls, each ball had: a sneaker keychain (cheap off Ebay), a colored ring and a necklace with Hello Kitty holding a tennis racket, as well as a water bottle.  For the boys, they got the sneaker keychain, a finger skateboard and a special sports water bottle that I found on clearance at Michaels.  I put each ball inside a clear plastic treat bag and tied the top with tennis ribbon.  Seriously CUTE!!  Each kid also got to take home a set of plastic tennis rackets and balls that I found online from a dollar store.  They were on clearance for 60 cents each set!

GAMES: Fortunately for us, we have a public court just across the street from our house.  I hired my daughter’s coach for an hour and had all the kids at the court.  We had several rackets between us, and some kids brought one too so it worked out.  We also had to have several parents there to keep 12 kids in line while she did fun stuff with them!  It was a rowdy, excited group so it wasn’t all that easy!  But she just did basic, easy fun stuff with them and they loved it.  It helps that she is so wonderful with kids! After the court, the kids enjoyed the play structure in our backyard for most of the party but once they opened the racket sets, they began to pair up and play more tennis in our backyard.  I also filled an empty tennis ball can with Lemon Heads because they are small yellow balls and played a guess how many game.  Winner took the can home.   Then we did the traditional piñata.  We couldn’t find a tennis ball one but found a baseball one online.  We got yellow highlighter markers and filled in the white areas to make it tennis ball colored and then peeled off the red part to make it a tennis ball instead of a baseball!  My kids are not aggressive enough with piñatas to get candy so I filled a small bag with candy and tied each kids name to it.  When the piñata broke, all they had to do was look for their name.  I stole this idea from the Duggars!

FOOD: I took the day off from cooking and simply ordered a pizza for the kids and Barbeque for the adults!  I figure serve whatever you like, as long as the theme is pulled off in decorations, what they’re eating shouldn’t matter that much!

CAKE:  I found a super cute cake online but had no idea how to do it myself.  It was a simple sheet cake that looked like a court with cupcakes around it that looked like tennis balls.  I took the image to my local Von’s store and they made it for me!  Their cake is delicious and it was a hit, pardon the pun! At the end of the day, my daughter was thrilled. I got many, many compliments on the party and the decorations and attention to detail.  For sure look at Pinterest for ideas, there’s lots of images and ideas on there.  Other than that, the other ideas I found were off of personal blogs and then my own inner Martha!  I would definitely do this party again! 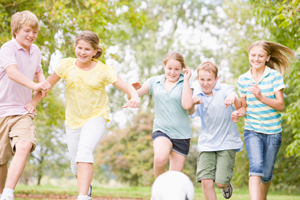