This was a party for my son who was turning 5. I made practically everything myself to make it as creative as possible.

Starting with the invitations, I created a 3 panel comic strip that read (Name) is turning 5 and he needs your help! Meet him @ Super Hero Headquarters for a Smashing good time (picture of The Hulk) the last panel contained the party details (place: Super hero headquarters, time, date etc.) RSVP to Wonder mom (ME!). I also made sure to tell them to wear their favorite super hero gear! I printed it out and glued it to a piece of brightly colored cardstock for more character.

We all had on super hero gear (Dad had a batman shirt, I had a Wonder MOM shirt Birthday boy had on a cool vintage Marvel comics tee, and even baby sister, 9 mos old, had her pink cape, purple bathing suit, over her pink shorts and topped off with a silver ribbon for a belt ADORABLE and a huge hit!) Next for the décor, At the entrance to the house I placed my son's Spiderman motion activated toy. Everytime it detected motion (i.e. a guest) it would say STOP! You have entered a restricted area! Or my spider sense is tingling! and make the web slinging noise. Everyone loved I

t! I used a different super hero as inspiration for the tables. Each table had a tablecloth, runner and centerpiece (all from the $1 store), in the coordinating colors of a super hero (ex: Batman table had Black table cloth w/yellow runner and blue centerpiece) then I decorated with all colors of streamers. The main table had a red cloth table cloth and was decorated with boxes that I painted black w/ metallic silver squares to resemble a city scape. The boxes were all different shapes and sizes. I added my son's super hero figures and cars to make it more fun. Then I sprinkled some 4th of July confetti (star shapes) around to make it festive. I purchased some blue kitchen towels from the $1 store, did a really quick top stitch, threaded some nice red ribbon through it, and added a sticky back felt star to make the perfect sized cape! They were a huge hit! I added those to the back of each chair along with a black mask I found at Walmart for $0.97, for each kid to pick out as they entered the party.

Cake & Goodies: I make all the cakes for our parties so this year I made a spiderman cake. I used 3 cakes (2 for bottom cake and 1 for top cake) It was a blue iced retangular cake with a red Spiderman face on top. I placed it on top of a black project board. I also made some spiders out of rice krispy treats to hold the 5 candle, and placed them haphazardly on the project board. I covered them with black frosting. Around the cake I placed some more boxes, or buildings, and action figures along with more confetti. I also purchased a HB Banner and hung that over the cake table. I made some POW ZAP BANG signs and hungs those at various heights with fishing line as well as a couple of small Batman & Ironman action figures to make it look like they were flying over the city. I made a couple dozen tie-dye cupcakes which the kids thought was SOOO COOL (you can get the recipe online). Using Lime flavored Hawaiian punch and some dry ice I made Hulk Juice and placed it in a punch bowl with a little sign that said HULK JUICE. The kids thought it was the coolest thing to see it smoking and bubbling.

GAMES: It was over 100 degrees that day so the pool was the main activity. But I also had an obstacle course for the kids to get some extra energy out. They had to zig zag through a few cones, leap over a tall building made of legos, crawl through the Spiderman pop-up tent, rescue the baby from a tree and give the Bop-Bag with the Joker's face on it one quick punch. Then they ran back to the starting line and tagged the next super hero. We also played musical chairs using Batman theme song.  Favors: I purchased the following from the $1 store: crazy straws, mini squirt guns, Marvel taffy, Ironman candy sticks, Batman candied bats, Marvel band-aids. Using an 8 pack of primary colored plastic cups (also from the $1 store) I placed the candy and items inside the cups, them placed them inside a clear celo bag with some colored fiber fill and tied a ribbon around the top. Then I added a super hero sticker to the front of each one. I happened to find Wolverine plates in the $1 section at Target that were 75% off. So each child ended up leaving with a Cape, mask, cup, straw, plate and some candy. Not bad if I do say so myself! It was A LOT of work but after all, I am WONDER MOM! 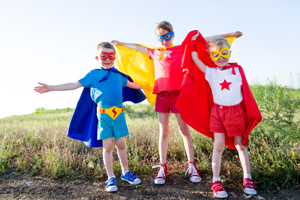