Sweet 16 Party!    This can be a tough one, because kids this age don't want anything corny, or parents hovering around.  So my husband and I rented a local women's club so we could host a dance party.  By renting the club, you don't have to worry about the noise, and there is plenty of parking.

We sent out two sets of invitations: one to the girls, which were pink and feminine and told the girls to wear "dressy dresses."  Girls this age don't get many chances to dress up for the boys, so they loved it.  The boys' invitations were less "girly"--just a flyer with a cartoon squirrel dancing at the top (my daughter is a dancer), with the basic information and a request not to bring a gift.  This is big for boys--they never know what to get, and this way, it lets them off the hook.  We did tell them to wear "collared shirts" in deference to the girls, who would be very dressy.

We decorated the clubhouse with different shades of pink balloons, just blowing them up with helium, letting them bump up to the ceiling with the long ribbon streamers hanging down.  This lends a little atmosphere to the empty hall.  We also did a banner with her name and "Sweet 16", and put round tables around the edge of the dance floor, with folding chairs.  We used white tablecloths, and little round mirrors with votive candles and chocolate candy hearts as the centerpieces.  We also had a big birthday poster to sign, with an 8 X 10 photo of my daughter and lots of pink hearts all around.  Everyone signed it, and it's one of her most prized possessions.

The main reason the party was a success was the DJ, one of my daughter's classmates who runs a DJ business with some friends.  He knew exactly what songs the kids liked, even though the lyrics would burn your ears.  The choice of DJ is the MOST critical factor to a successful teenage party.  If the kids think the DJ is lame, they won't stay.  My daughter and her friends go to Catholic school, and they aren't allowed to dance inappropriately or listen to dirty lyrics, so having a night without the deans checking their every move was huge.

We hosted about 150 kids from her school, and that means we needed helpers.  We had dads at the door with a list of invited guests, and no one else got in unless the birthday girl said OK.  These same dads also moved kids out of the parking lot and into the party.  (Next year we would definitely include wristbands with the invitations.  No wristband, no entry.)  I also hired a couple of college kids at $50 each (one boy, one girl) to help with clean-up, serve snacks, and to advise girls dancing in a lewd way that they were making fools of themselves.  (Funny how girls will listen to a 20-year-old stranger, but not their parents!)

They also took some great pictures.  This way, mom and dad aren't hovering and creating a chilling effect, but you do have "eyes and ears" out on the dance floor.

Food was easy.  We started the party at 7 pm, so kids would have already had dinner.  I sent up a three-tiered silver tray in the food area, and piled it with Krispy Kremes.  That, plus cheese, crackers and salami was all we needed.  We also had big ice chests filled with bottled waters outside the doors, in the kitchen, and some waiting in the fridge.  The kids went through water like crazy!  At about 11 pm, my mom friends starting making simple peanut butter and jelly sandwiches on white bread, and cut them into quarters.  We piled a serving tray, and sent our helpers out into the crowd.  They snapped those up in a hurry, and no mess.  I started making grilled cheese sandwiches, too, and did the same thing.  So easy, and the kids loved them.

We only had one case of a kid showing up drunk, and my husband delt with him by sitting him down and making him drink water until his parents showed up.  He actually came back to the kitchen to apologize.  It could have been a nightmare, but because we planned for every eventuality and had lots of parent help, it was the best night ever for my daughter and her friends.  I would do it again, and we probably will. 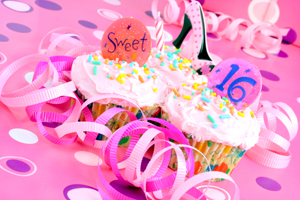