Teddy Bear Dress-up Tea Party  Our invitations were a huge hit with all my daughter's friends!  They were large teacups with two oval pieces of cardstock tied to them with ribbon.  We sent these out in 5 3/4 by 8 3/4 inch envelopes.  The top piece of paper was a poem that we ctually got from this site that we altered to read:  I'm Having a Teddy Bear Tea Party, It's 4th Birthday Fun! So Dahling if you can make it, I'd love for you to come! Throw on a frilly dress and bring your teddy bear, We'll play some games and drink some tea, so I hope to see you there! Your mommy's invited too, looking pretty as can be! So have your mom call my mom, and we'll do tea!

The second oval that was under the first had all the usual party information and also said:  *Please wear your prettiest dress-up dress, your finest tea hat,and bring your favorite teddy bear* *Additional tea finery will be provided in the form of beads & gloves* (which I found at a Dollar Store)

Everyone came in their dress-up dresses and really great tea hats that were big with feathers and ribbons!  Even the moms dressed up and had fun!  I had put balloons and crepe paper around the corners of the room into the center on the ceiling where I ad hung the pinata.  It looked really festive!  When everyone got there, we set their teddy bears up at their own table with a doll's porcelain tea set that we purchased from the dollar store.

Then each teddy bear got their own hat from the little girl  table that had that guest's name card on it.  I made the hats from the little straw craft hats and just punched holes in both sides and strung a small ribbon through it so we could tie the hats on the teddy bears.

For our games we had  Musical Tea Cups: The same large tea cup stencil was cut out in card stock and taped to the floor in a circle.  The girls all walked in the circle on the tea cups and when the music stopped, whoever wasn't on a tea cup was out.  Then we pulled up one of the tea cups.  Basically musical chairs with tea cups instead of chairs. Pin the Handle on the Tea Pot:  I made a big Tea Pot without a handle on a poster board.  Each girl had a handle with their name on it and tape on the back.  They were each blindfolded and taped their handle on.  This was a huge success and all the girls loved it!

Tea Pot Pinata:  I was able to find a Tea Pot Pinata on birthdayexpress.com and also bought a pull string kit to add to it.  The girls just loved it and we didn't have any injuries from flailing sticks!   Most of the party time was taken up with the actual Tea Party.  I borrowed a pretty Corel flower dish set that also had a tea pot and sugar and creamer. Each girl had a small plate, saucer, tea cup, pink plastic spoon and fork, and Tea Party Napkin which I also bought from birthdayexpress.com.

Our menu was pb&j mini flower cutout sandwiches, cucumber and cream cheese heart cutout sandwiches, mini pigs-in-a-blanket, and a cupcake from the bigger birthday cupcake cake which was in the shape of a tea pot. This cake from Walmart was a big hit!  It was many cupcakes put together in the shape of a tea pot and then frosted to look like the pinata tea pot!  It looked so great and it was very good finger food!  We also had a separate table for the moms with th same menu items and another dish set with matching tea pot and sugar and creamer.

For the tea, I bought a box of Celestial Seasonings Fruit Sampler Herb Teas and those were almost like punch, so a very good tea for a child's tea party.  We all made a b  to-do about keeping our pinkies out, using the mini-tongs with each food, and using everyone's last names (eg  Mrs. Potter) when passing food and chatting!

Favor bags included a necklace, two bracelets, a lip gloss ring, and a teddy bear sucker--everything was from the dollar store near us.

For Thank You cards, we bought some greeting cards that have a space to put a picture and at the end of the party, took a picture of each guest with the birthday girl and put them in the cards.  Everyone really loved this idea and my daughter really had un making out each card!

This party was from 1 to 3 pm and was such a big success that several mom's around town have used the same ideas and had tea parties for their little girls birthdays!  Because I found all of the party favors at the dollar store and made the invitations yself, this party was really very inexpensive!  The only things that were a little more money were the pinata, stuffing, favor bags, teddy bear hats, and food which only amounted to about $60 total. 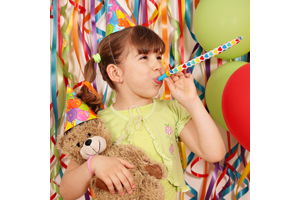