For my son's 2nd birthday party, I made his invitations on my computer.  Simple tracks with trains on them.  Inside, I put DESTINATION:  The Birthday Party Express Train Station (our house address), DATE, TIME, and RSVP: Train Master & our phone #. I included for everyone to dress up as train engineers, bums, etc. (Including parents).

I bought some cute train plates, cups and napkins.  The colors were primary red, yellow, green and blue.  I found a table cover that looked like a town with railroad tracks going through the town.  I took some of my son's toy Thomas the Tank Engine trains and placed them on the tracks.

I found some trains made out of wood (in the craft isle at Wal-Mart) which you could paint but I left as is and attached some Thomas the Tank Engine balloons to these.  I set them in the center of the table, in the window sills and on the serving table (The extra balloons, I weighted and put in the corners of the dining room). On the serving table, I placed our Christmas train track around the balloon centerpiece and turned on the train!  The kids loved this!  Beside the centerpiece, I placed a lantern.

Around the track, I placed the food which consisted of pizza (for the adults), train shaped PB&J sandwiches (use a cookie cutter), chips, drinks & juice, and brown paper bags filled with popcorn.  I wrote on the bags, TOOT TOOT POPCORN.

I made several signs and banners on my computer (real easy and free!) such as CHOO CHOO PIZZA, CHUGGA CHUGGA PUNCH, a long banner that had a train and the #2 on it that said The Birthday Train Express.  I had a colorful Happy Birthday banner on the wall and a Thomas the Tank cake.

On the front door, I made an R&R sign out of cardboard and white/black acrylic paint.  I made train tickets and a train schedule (from my computer) and taped the schedule onto cardboard that showed each "stop" and time for each event.

The first stop would be Playland Station, where everyone went out onto the back deck, received their train ticket and played in the train I made out of big cardboard boxes which I painted in the primary colors and added wheels out of paper plates, and again utilized my computer and put a #2 on the sides and made a "light" for the front of the train.  One of my son's B.D. gifts from his father and I was a plastic, blow-up school-bus ball tent.

So, the kids played in those for a long time. We took a train whistle and blew it to get the kids attention and lined them up and pretended to be a train and shouted "choo-choo" all the way to the dining area where I had a sign up that said "The Birthday Express Café'".  I did signs of lanterns, conductors, trains, the words All Aboard, Track 2 Ahead, etc. all over the house.  I did a Gift Station sign and placed in on my son's radio flyer wagon where the kids could leave the presents.

I played a train tape with lots of neat songs on them during the meal.  The kids took home goodies of train stickers, train shaped erasers, pencils and (off the computer) a booklet of pictures to color and poems.  I got some of the goodies from our local train station in Spencer, NC.  It's a historical museum and a great place to get hats, whistles, t-shirts, bandanas, etc.

It would have been neat to take them on a train ride there but that would be more suited for older children.  The best present my son got was the cool choo-choo train bed my husband made him.  My mom made the sheets, comforter set and bandanas out of the extra material.

Everyone still talks about that party, from which I got several of the ideas from this website.  Thanks!! By the way, since I utilized my computer so much and already had most of the items needed for decorating, this party was very inexpensive and made my husband very happy! 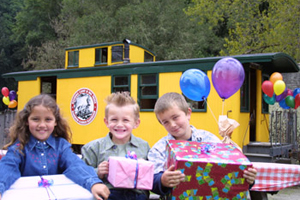