This can be a Birthday, Halloween, or fall seasonal party.  Recently I threw an Octoberween Party for my daughters ages 3 and 7.

I made invitations out of black construction paper and glued cut out jack o lanterns to the front.  I included in the invitation to dress up if you'd like and let the parents know we would be having a light supper and healthy treats, along with lots of fun activities.

There was a giant web made from twine in the front window, cob webs with plastic spiders and accent orange light bulbs for a warm glow.  The tablecloth was a washable white one.  There were pumpkins lined down the center for decoration (the kids each took one home) and my older daughter made fall colored confetti out of construction paper using a hole puncher.  The sofas were pushed up against the wall with tables removed or pushed aside for extra play room.  On the buffet table there was another white table cloth decorated with small pumpkins and gourds. This is where we displayed all the treats- a cake stand with pumpkin cupcakes, caramel popcorn, candied nuts, sour sliced apples, and cups, napkins, plates and forks.

5:45pm Personal size pizza crusts were made ahead of time so all I had to add was the sauce and cheese. 6 pm Pizzas were put into the oven and the timer was set in case I got distracted. For the even more ambitious-you could add olives for eyes and, pepper and carrot strips to make faces on the pizzas.

6 pm The children arrived eager and happy as they were greeted at the door by my husband dressed up in costume. We had a loop of festive music playing-nothing scary.  We served hot (warm) apple cider and the children went to the table to decorate their goody bags with handles.

6:15 pm When they were finished with decorating their goody bags I served them personal pan pizzas.  The kids loved their pizzas on the animal paper plates.  The kids loved the snacks that were provided; even the apples were all gone by the end of the evening!  I sprinkled lemon juice all over them to keep them from browning, but really the kids loved the sour taste. I made the caramel sauce (my own recipe) for the caramel popcorn, and used a recipe for the candied nuts.  It was fairly simple to prepare in advance.

6:45 The next thing the children did when they were finished eating, was pick a pumpkin from the center of the table.  Some of the younger kids were still eating, so it worked out perfectly to have the older kids have a bit more time to get creative.  We had assorted "googly" eyes for them to glue on (we had glue already put into tiny cups with cotton swabs).  In advance we cut out felt shaped mouths, triangle noses, teeth, and mustaches.  The kids cracked up over the wiggly eyes.

7 pm The next thing we did was play 'pass the gourds'  kind of like hot potato but you start out with 3 gourds then gradually go to 1, and if you have one in your hands when the music stops you stay in the game. The last one still with a gourd wins!

7:15 pm Then we played pin the tail on the cat.  I had a large size cut-out shadow of a cat with no tail hanging up. I cut it out of black felt. The image was traced from my daughter's science book.  It's the same as pin the tail on the donkey.  The kids were blindfolded and stuck their one sided adhesive tails onto the cat.

7:30 pm The game they liked the most was the eyeball toss.  We purchased a big plastic pot, and plastic eyeballs at a party store.  And the kids took turns seeing who could get the most in.  This worked out for everyone because the younger kids could get closer to the pot.

7:45 After all that fun, the kids had fun dancing to the music (their idea). I had originally planned to read 'There's a Nightmare in my Closet' but ran out of time.  It would have been a good back up if I thought the kids were getting a bit rowdy.

8 pm The kids went home beaming with their creations, and their bags full of treats.  Inside I put in Newman Os(like Oreos), Sunspire chocolate candies(like m&ms), Halloween pencils that had erasers that lit up, malted milk balls, a mini bag of pretzels, College Farm lollipops and plastic eyeballs from the game. The treats were already assorted ahead of time and put into Ziploc bags so I could easily empty them into the goody bags once they were decorated.

Side notes: It would be helpful to have an extra adult or two to stay around. My husband passed out bags of pretzels to trick or treaters that came to the door, but we turned off the doorbell not to disturb the party. This party is great if your child has allergies and/or if you want to include children of all faiths.  The kids are sent home with the candy so the parents can portion the candy out for the younger ones.  I created a mini schedule of events before the party started to keep everything flowing smoothly, giving 15 min on each activity because kids tend to get bored longer than that.  I allowed extra time for the meal.

Your kids will love this party, and you will too. Our kids were in bed by 9pm and we finally got a chance to relax :)

Thanks and have fun! MW 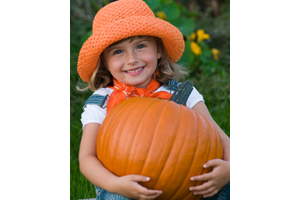