Bear in a Big Blue House

The house was decorated with blue, green, and purple streamers and balloons to match the tableware.  I also had a Bear in the Big Blue House balloon.

I ordered Bear invitations, and for the location of the party, I put "The Big Blue House", with my address underneath.

We played "What's in the Mail Today?", which involved handing out blue envelopes with each child's name printed on them.  Each envelope contained Bear in the Big Blue House, bee, and other assorted stickers that my daughter had chosen.  The children headed down to the "ottor pond".

The ottor pond was a blown-up swimming pool filled with clam shell shaped crayons hidden in tons of packing peanuts.  (I melted some old crayons and poured them into a clam shell candy mold.  I could have also used candy.)

The children went on a "clam dig" to find all of the crayons in the pond.  This was the best part!  I got great video footage of this, and the kids didn't want to leave this game!  The children used their clam shell crayons and Bear stickers to decorate yellow, blue, and purple lunch bags.  The bags were filled with little bottles of bubbles, individual sized PlayDough, Bear in the Big Blue House stickers and rings, and small kaleidoscopes.

The cake was made from a Wilton 3-D cake mold.  I used frosting tinted blue, sugar cookies cut out in the shape of the door and sidewalk up to the house, and some of the rings for the windows.  I also placed small Bear and Tutter figurines in front of the house.  The house sat on a round cake, which was decorated with green frosting to resemble grass.  We were going to do a "Where is Shadow" game with shadow puppets, but we ran out of time.

The best part is that Bear in the Big Blue House happened to be in town the weekend of my daughter's birthday, and she had such a great time at the show! I made my own thank you notes on the computer with pictures of my daughter with the items each person gave her, a picture of Bear from the show, and a picture of each guest at the party. 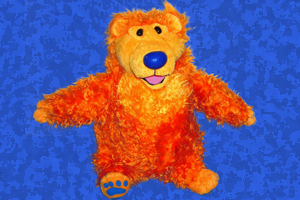