My daughter wanted a Bratz party for her 5th birthday. I thought that most bratz stuff is aimed at older girls, so we combined it with a disco. This year she wanted her party in a hall, so we hired the local one which was really cheap, £15 for four hours. For this reason, I decided to splash out on the party bags.

I ordered all her bratz partywear including the invites and all tablewear from greatlittleparties.co.uk then found them in our local cake shop!!!but it was easier anyway. Then i started to search everwhere for lip shaped party bag ideas.  I found lip whistle blowers, lip shaped key rings filled with lip gloss, cherry lip sweets, love hearts sweets and post it notes in the shape of lips(which i split in half as these were expensive) then i added other girly stuff like fluffy pencils, heart rubbers, necklaces and matching bracelets(i got a job lot from ebay) and of course bratz sticker sheetsand bratz balloons.  My husband sat for ages and designed a homemade colouring book which we printed out for each party bag.

About five weeks before the party i began printing out large posters of the bratz about 5 foot high (which you can get free from colouring pages online then blow up as required), about 8 girls and 3 boys, painted them all the right skin/eye colours so they knew which they were, then we chose our own colours for their clothes and added tiny beads and sequins so they'd catch the light. I have to admit they looked great.

Then the party games. I painted two identical posters of all the bratz together and then cut them up into pieces for a team jigsaw game, the first team to put all the pieces together wins. They really enjoyed this game and were all really shouting for their team to win.

Next we played pin the lips on Chloe. I used the lip post it notes i had bought and just wrote the childs name on it, for the face, i printed a large poster of chloes head to use. We played the traditional pass the parcel and musical statues which thay still love when they're young.

The rest of the party was the disco, we bought flashing lights which didn't cost a fortune, but what an investment for christmas and future parties, and we also bought a small fog machine which was great because the fog really showed off the coloured rays of light. The girls danced for ages to all their favourite tunes which we played through an amp I have for work.(I decided a DJ wasn't necessary for five year olds)We did some dance routines too but really at that age they kind of run and dance about and do their own thing.

The food was mostly the usual party food, sausage rolls, cocktail sausages, crisps etc but I always like to throw in some cheese, ham and cherry tomatoes. For sweet stuff I got the iced gems, made pink buns, with a fruit salad. The birthday cake was a standard Bratz cake from the supermarket which really saved me some time.  We decorated the hall with loads of pink and purple balloons, purple crepe ribbon and the bratz all around the walls. Luckily the people didn't mind us using tack to put stuff up as some halls don't let you.

We rented a helium tank to do the balloons so my husband made some really big ones and tied them to the back of the chairs at the food table which looked really impressive.  Last but not least my daughter wanted to look like one of the bratz, so we took her to my husbands salon straight from school to have beads put in her hair and loads of hair glitter. I bought her one of those tiered frilled tops that’s in at the moment and we glued the tiny gems I had left over to the bottom of her bell bottom trousers in patterns. She looked sooo cool. We decorated the hall while she was having her hair done so she really got the wow factor when she walked in.

At the end of the party all children were very tired after all that dancing but it really was an excellent party. In the end my daughter wanted the boys to come so we bought football plates and party bags and we made a boy bratz jigsaw game so that they didn't have to do real girly stuff.

For thank you notes we printed our own because you can't buy the ones that match the invites, on one side we had a picture of all the bratz with a big thank you above them and on the other side we put a picture of my daughter at the party smiling with the words "You made me this happy", then "Thank you for coming to my party and for my lovely present" More parents commented on how lovely these were than anything else. Hope this gives you some ideas although I think some of these ideas are from this great site. I use it every year and think it’s the best. 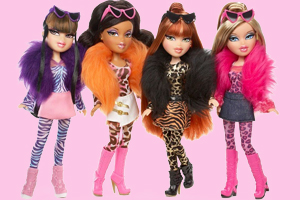