My kids and I love to cook together, so my daughter and I decided that it would be fun to have a few friends over for a cooking party for her 8th birthday.  I wanted to teach them how to do a few things that many had probably never done in a kitchen before, and I wanted everything to be very much hands-on for them, so my goal in the preparations was to do ahead of time the stuff that would either be boring to them or that needed to be done by an adult, so that they could participate in every step that was happening at the party.  It was also important for space reasons to limit the number of children.  We had 10 and that was really stretching my kitchen to its limit.

Or the invitations, I found a printable recipe card that I liked online and filled it in with the following text:  recipe for: Birthday Fun; from the kitchen of:  Aubrey (Last Name); Ingredients:  A few homemade pizzas, 1 gallon of friendship, 2 cups of fun, 1 cup of imagination, 1 generous sprinkle  of laughter, 1 birthday cake, 1 gallon of ice cream;  Start off with a few pizzas.  Add friendship, fun, imagination, and laughter in the kitchen at (address) on (date).  Blend until laughter bubbles to the top.  Bake from 5:00 - 7:00 pm.  Top with cake and ice cream.  Please join us for cooking fun at Aubrey (Last Name) Chef's Academy.  Call the Master Chef ASAP at (phone number) to make your reservation.

I ordered a white youth size apron for each child and adult ones for myself and Aubrey's grandmothers who agreed to be my kitchen helpers for the party.  (I couldn't have done it without their help!)  I hand painted each one a few flowers and Chef (Child's Name) in bright colors.  The aprons were the party favors, and it was a good thing we had them because they went home well used (aka MESSY).

The first project was homemade pizza.  I made several batches of homemade pizza crust dough ahead of time and divided them into individual servings.  I gave each of the girls a foil pie plate (with names on the bottom in permanent marker), and they got to spray them with cooking spray and sprinkle them with corn meal (which many of them had never used).  I borrowed several rolling pins so that we could do this with about half of the girls at a time.  They sprinkled flour on the counter in front of them and rolled out their dough and placed it in their pans.

The dough needed to rise for a few minutes after rolling it out and then needed to bake for a few minutes.  I had set out all sorts of toppings for the pizzas, so when the crusts were ready, the girls spread their own crusts with sauce and topped their pizzas with whatever they wanted.  Then we put them in the oven to bake.  I also made a couple of my favorite chicken, spinach, pesto pizzas ahead of time (to serve to my kitchen helpers and other mothers who stayed during the party) and baked them while the girls put toppings on theirs.

The next project was to make a fruitini, which actually filled the time while we waited for the pizzas.  While we waited for the pizza crust to rise and then bake for a minute, I got some cute clear plastic cups and had the girls write their names on them with a permanent marker.  The girls sugared the rims by rubbing an orange wedge around the rim and then dipping into a plate of sugar.  Around our table, I had placed several different kinds of fruit, and the girls went around and chose what they wanted to put into their cups.  They got to pluck their own grapes, cut the stems off of their strawberries and slice them, scoop out some fresh blueberries, use a melon-baller to serve themselves cantaloupe, and cut pineapple wedges into chunks after I took the skin off.  I let them use real (small) knives.  I was amazed to find out that one girl had no idea what a cantaloupe was, and another did not know what a whole pineapple looked like.  We then set the fruitinis aside.  (Also, before the party, I had cut up some of the fruit into a big bowl to serve the adults.)

The pizza crusts were ready at this point, so we put toppings on them and put them back into the oven.  While we waited for the pizzas to bake, we sat down and ate our fruit. When the pizzas were ready, I transferred them to a plate for each girl and let them cut their own pizza with a pizza cutter.  With the pizzas, I served lemonade and let them each get a couple of ice cubes that I had made with pureed strawberries.

After pizza, it was time for dessert.  I love decorating creative cakes, and I wanted to teach the girls a little about cake decorating.  I made a cake in the shape of an apron but cutting a triangle off of two corners.  I decorated it to look like my daughter's apron that I had painted for her, using licorice whips for the neck and waist ties.  I thought about letting each girl write her name on the cake with icing, but it didn't seem like we'd have enough room.  (It would have been difficult for them to write small enough when they had never tried to write with icing before.)

Instead, I decided to also make a batch of cupcakes.  I gave each child a cupcake and some white icing to spread over the top, and I showed them how to make it smooth.  I had made 4 different colors of icing and separated them into 3 different tubes with different kinds of tips so that I had 12 tubes of icing that the girls could use.  I showed them how to make different kinds of leaves and flowers and designs with each kind of tip and then let them pass the different ones around to decorate their cupcakes how they wanted.  Some of them turned out really cute.  Others just wanted to pile as much icing on top as they could.  When they finished, I let them choose whether they wanted to eat their cupcake then or have a piece of cake and take the cupcake home.  Aubrey insisted that we needed ice cream sundaes also, so they each got to make a small sundae with whatever toppings they chose to go along with their cake.

It was a great time, and I think the girls all enjoyed the chance to get their hands dirty in the kitchen.  I was grateful to have some extra adult helpers to help me clean up and transition to the next step and also to help the girls with some of the hands-on things when I couldn't get around to help them all myself.  It was also quite helpful to have a double oven to get all of the pizzas cooked at the same time. 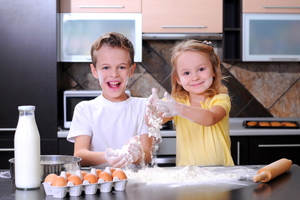