We had an indoor Cowgirl Party for my 5 year old in January.

First off we made invitations.  We took her big play horse outside and took a picture of her in her Cowgirl garb on the horse. The front of the invite said, "Howdy, Partners, Gracie's turnin' 5, roundin' up her possee, and havin' a Cowgirl Jamboree, and YOU'RE INVITED!!!" Under that was a big picture of her on her play horse.  When opened, the invite said," Cowgirls: Be on the lookout for Wild Bill!  That mangy, no-good, double-crosser done gone and stole all our goody bags and we gotta get em back!"  Then I included a clip art of a bandit on a horse.

After that I gave the whereabouts (Which was at the visiters center of our local park).  Asked the cowgirls to mosey along around 6 ish to 8 ish and let them know that the cook would be servin up the best hotdogs on the prairie.  Told them to bring their horses if they had them and to wear their cowgirl hats.  At the bottom of the invite it said, "If yer in the pokey or on a cattle drive and can't make it to the Jamboree have yer ma or pa give us a holler.  Dadnabit partner, we'll miss ya!  But if yer comin, YEE HAW, we'll see ya there partner!

Then I started getting things together.  I made an Old West bulletin board complete with Wanted Posters of Wild Bill (our youth minister holding gooding bags and wearing a cowboy hat and bandana).  Also made Wanted Poster of my boys and some neighborhood kids.  Wanted for various things: cow tippin, bank robbin, snorin, not keepin their rooms clean, etc...  Even a neighborhood dog got a Wanted Poster for stealin and eatin cat food (He really does).    Also included some classifieds from the 1800's and a sign announcing the Jamboree.  The bulletin board was a hit with the parents at the party.

I made signs for the bathroom (OutHouse), Kitchen (Waterin' Hole), I made Welcome to the Ol West sign for the front door, (No Fightin', No Cussin', No Bandits, and No Varmints!)  Checked out Oriental Trading for the goody bag gifts.  Got the Cowgirls plush horses, plastic horses, harmonicas, sheriff badges, and gold coin gum and chocolates.  The bags were plain brown bags with horses and cowboy boots stamped on them.  I made two cakes: one My Little Pony cake and a Pink and White Cowgirl Boot cake.  Used the day before to bake and decorate. The Visters Center Room was one big room.  We used one area as the corral. We brought all of Gracie's horses and stables and left them there for a play area.

When the girls arrived they had to take their horses to the corral.  We ate first. I had borrowed three George Foreman grills. We grilled hot dogs and had Root Beer floats and chips.  Plates were aluminiun pie pans and I used red cups and red balloons.

For the party: One corner was Sally Six Shooter. I had bought cheap play guns at Wal-Mart and the Dollar Store. The ones that shoot out little rubber things.  I had also taken 4 two liters and washed them out and made Sarsparillo labels for them (Sarspillo, Cowgirls Love It on the Prarie).  The game was to shoot at them and knock them down. The girls loved it.

The next game was Pin The Badge on the Sheriff.  My husband had printed off a bigger than life size picture of Gracie in her cowgirl garb with a sheriff badge on.  A friend at the local print shop laminated it.  I printed off sheriff badges, cut them out and used ticky tact on the back.  Each girl got a bandana (to keep) and we used them to cover their eyes.  The winner got a bag of gold chocolate coins.

The next game was Rattlesnake Pass.  (Just like Hot Potato).  We had made a CD of cowboy/girl songs for the party including Home on the Range, Back in the Saddle Again, Cowboy, Take Me Away, Happy Trails, plus the theme songs from GunSmoke and Lone Ranger (Just do a search for Roy Rogers and Gene Autry we used a bunch of theirs).  When the music would stop whoever holding the rattlesnake would have to get up.

I had a table set up with markers, crayons and horse pictures.  I made a big deal of getting to color pictures so the girls getting out of the game wouldn't be disappointed plus they always had something else to do (play in the corral, play Sally Six Shooter, or color horse pictures).  The winner of this game also got chocolate coins.

After everyone was finished coloring we cleared that table and everyone got to decorate a picture frame. I got these at the craft store. They were brown. We wrote their name on the top and bubbled in the letters. I had bought stampers with horses, boots, ladybugs and My Little Ponys on them. The girls stamped their frames. Once they were finished one by one they got their picture made on our big stuffed horse (We brought it from home).  We also had a lot of homemade cactuses (Styrofoam and toothpicks painted green) behind the horse.  These pictures will be included in their thank you notes.

After we opened presents two little boys (brothers of a guest) brought in Wild Bill. I had mentioned to the girls that I heard he might be in the territory.  Wild Bill came in and apologized for swipin their goody bags.  The little boys had pretend guns and they told my husband later this had been the funnest party ever (and it had been for their sister not them bless their hearts!)  The girls loved seeing Wild Bill and loved opening  their goody bags.  The only thing I would do different is include one more game.  I had about 5 or 6 minutes that wasn't planned.  We could have played the Hokey-Pokey had I thought of it earlier and gotten the music.  It was a wonderful party and I have learned that if it planned just right it cuts down major stress on the mom :)  It was also very inexpensive.  Have fun and good luck! 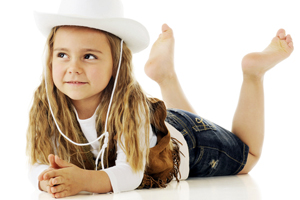