My son, Tony, really loves watching Steve Irwin’s ‘Croc Files’ so when his 4th birthday was rolling around naturally he wanted a Crocodile Hunter birthday party. At the time there wasn’t any party ware that featured Steve so I had to improvise.

First were the invitations, which I made myself. I went to the craft store (Hobby Lobby) and found a package of thick card stock paper in natural colors (tans, greens, and browns), natural color square envelopes, and Australian themed stickers that included crocodiles. I had taken some fun photos of my son outside in his ‘Steve’ clothes (a cargo style outfit purchased at Old Navy in earth tone colors, he picked it out!) kneeling down over his 3 foot plastic crocodile ($8.00 at Toys R Us). I got down in the grass and took them at ground level for a more realistic effect. They were really cute.

I took the best one to Staples and had them make several color copies, one for each invitation. I cut the card stock paper so that when folded it would fit into the envelopes and then cropped the color copies so that they would fit onto the invitation leaving enough room for a strip of different colored paper.

On this strip I wrote:  By Crikey! I’m turning 4!  Let’s hunt for snakes and crocs galore. Then I decorated the front with the Australian stickers. On the inside, on the same color paper as the strip on the front,  I wrote:  July 20th is when we’ll meet,  For munchies and something Aussie sweet.  4 o’clock at my crocodile’s lair,  I hope to see ya’ blokes there!   Please RSVP So my mum will know how much food she’ll need (then our phone number)  And again used some stickers for decoration. The invitations were adorable and I got so many compliments on them. In fact some parents said they came just to see what I was going to do next!

I planned the party to be outside since I had over 20 children RSVP! I had gone to Wal-Mart and purchased a cheap blue tarp and cut the edges so that it looked more rounded. I placed it in the middle of our yard shaded by trees and clustered a few house plants (ferns, palms, and some other large tropical plants) around some of the edges to hold it down. Then I used, from our garden, stepping stones that looked like a hippo under the water and placed it in the middle of ‘Crocodile Lake’. This is where the children would be eating so clean up would be easy and I wouldn’t have food all in my yard!

My husband blew up the baby pool and our crocodile float for the younger children and we decorated the yard with all the plastic snakes, crocodiles, frogs, bugs, and lizards we could find. We decorated the garage with streamers and balloons in different shades of green. The plates, cups, napkins, and silverware were alternating shades of dark and bright green and a green table cloth.

For our game, I hid blue, green, and yellow, Easter eggs filled with snakes, lizards, frogs, and crocodiles that when placed in water would grow (bought online at Oriental Trading). The children had to search the yard for their baby animals to take home and grow.

For entertainment I wanted to find someone with a snake. We live in a small town and don’t have any petting zoos so I called a couple of pet stores and found one that wouldn’t do it through the shop for insurance reasons but let one of their employees who had a pet snake come on her own time. She brought a Parrot and an albino Python as well as a Tarantula that the pet shop owner let her borrow. The Parrot and snake were very loving and I took a picture of each child petting the snake to use for the thank you cards. The Tarantula, of course, stayed in a cage but the kids got to take turns looking at him. I think the funniest part of having the snake there was the parents reactions!

The food was easy. I ordered a chicken nugget tray from Chick-Fil-A since crocs eat chicken and we drank cool aid. I decorated the table with Tony's 'Croc Hunter Jeep' and figures of 'Steve' and 'Terri' as well as some small bugs and lizards.

For dessert we had a cookie cake decorated like a river with a ‘Steve’ figure in a boat and crocodiles along the waters edge, which I supplied. \*Money saving tip: Our local grocery store makes cookie cakes for half that of ‘cookie’ stores! Same size cookie was $7.99 and they decorated it for free. It was beautiful and the girls at the bakery had a blast decorating it! Instead of doing the normal ‘goodie bag’ that the kids take as they leave, I bought a crocodile piñata and filled it with rubber snakes, frogs, and lizards, Tarantula pencil toppers, bug tattoos, crocodile stickers, the extra growing animals, crocodile clackers, glow in the dark bugs, and some candy. (items bought at Oriental Trading and Hobby Lobby)

This was our last activity and each child got a cellophane bag I had found with Crocodiles on them to put their treasures in and a plastic cup that also had Crocodiles on the front. (I believe they were from a ‘Safari Party’ theme and I bought them at Hobby Lobby.) When the piñata was busted and the kids had gathered all their treats they each went home with an over flowing bag!

When I sent out the thank you cards I decorated them the same as my invitations except I used that child’s picture on the front. Then I wrote: By Crikey! We sure had fun, Catching snakes one by one.  Then when you opened it up it read: Thank You for my birthday treat, Your thoughtfulness sure was sweet. My party was an Aussie blast, But mum says I’m growing up way too fast! Love, Tony (which he wrote) I am one of those who believe that really long kid parties are NOT a good idea so I try to keep mine short and full of action!

The party was a huge success and all the kids AND parents had a great time. I have even had a couple of people ask me to help them with ideas for their child’s party. My only problem now is this year he wants a Sponge Bob party and everyone is waiting to see if I can top last year! So far, I think I will. I have found a lot of wonderful ideas right here and I am already planning the party! 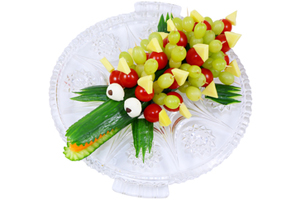