For Aaron’s 8th Birthday, we decided to have a Dinosaur Excavation.

INVITATIONS -  I created them in Microsoft Publisher, using dinosaur clipart from http://www.graphic-templates.com/free_ClipArt.cfm?bgFolder=dinosaur   They said, Don’t be extinctàCome to a dinosaur Excavation  And then it had directions to the park and the date and time.

DECORATIONS -  We got a big plastic tablecloth and covered one of the picnic tables with it, and put out plastic dinosaurs (dollar store) and that was about it, because we were at a park, we didn’t really dress it up too much.

FOOD - we had an ice cream cake from Dairy Queen, and then we made an Excavation site out of chocolate sandwich cookies and bone shaped candies (Dollar store).  We bought three packages of the sandwich cookies, and for the Excavation Site we broke up one package, and used a potato masher to pound them into the bottom of an aluminum foil broiling pan, then we put one package of bone candy, and broke up the second bag of sandwich cookies, mashed them down, and then did it one more time.  My husband mashed them in really firmly, so when we got to the park, we turned it upside down onto the tablecloth, and took the pan off, it looked like a pile of dirt.

GAMES AND ACTIVITIES  While the boys were arriving, my husband put together a dinosaur puzzle with them.  It was a triceratops, but just the bones.  All of the boys got to help, so it was a lot of fun.  Then, I handed each boy a plastic spoon and a paper sack, with their name on it.  I told the boys that they were paleontologists and asked them if they knew what that meant, which of course was someone who digs up dinosaur bones.

Then I told them that the pile of dirt in front of them was full of dinosaur bones, and then needed to dig for them, then I told then that the entire pile was edible, but that they couldn’t put their spoon back into the pile if they put it into their mouths, so they should put the dirt and bones into the paper bag.  After they demolished the pile, I had them count how many bones they had collected, and the one who got the most, got a magic towel (Dollar store, they turn into a washcloth when you get them wet, these had dinosaurs on them).

For the next game, we played Dinosaur nesting grounds relay  I put little plastic dinosaurs (dollar store) into left-over Easter eggs (Shop-ko).  The kids had to put an egg onto a spoon, dinosaur stomp over to the nesting grounds and open their dinosaur egg, bring the baby dinosaur and the spoon back to the next person, who had to do the same, etc.  There ended up being 5 people on each team because my nieces joined in this one.  The team who won got to pick an additional little plastic dinosaur, since I had some left over.

Then we went back to the table and made volcanoes.  We had cut 4 inch squares out of Cardboard, and we had each boy tape a pill bottle to the bottom of the cardboard, then we covered the whole thing with foil, except for the opening of the pill bottle, which I filled with baking soda.  I then mixed vinegar and dish soap and my husband had the kids all bring their volcanoes to the edge of the trail that goes through the park, and he poured the liquid solution into each volcano and let it erupt.  Then we put names on the bottom of each volcano, and told the boys how to make them erupt again.  Then we shifted down a gear and the boys sat and put another puzzle together, this one was a foam puzzle that actually stood up when it was done, and it was a little easier than the one which they had all worked on. (e-bay).

Then it was time for cake.  We had ice cream cake from Dairy Queen with a dinosaur plastic piece on it, and the kids sang and then we ate cake.  Then we opened gifts, which had a Star Wars trend to them (not surprising since Episode Three came out the day before the party).  Then my husband took the boys over to the sidewalk and we gave them each a stone.  They were Thunder Rocks (http://www.whalesdirect.com/product.html?t_q=CU147) and when you hit them with a hammer, they opened up and had crystals in them.

And finally, the piecedresistance, the boys got to choose a dinosaur egg (http://storeforknowledge.com/itemdetails.cfm/ID/2749) and Excavate a dinosaur.  The eggs were made of plaster and had tools for excavating the dinosaur in the package.  It took a lot longer then I thought it would to get the dinosaurs out of the eggs, but the boys all had a blast doing it.  Finally, Thank you cards.  Again, I made them on Publisher, and included a picture of each child doing one of the activities.  All-in-all, it was a great party.  If I had known that the excavation would take so long, I would probably not have gotten the puzzles or the geodes, or else, I would have told everyone it as a three hour party. 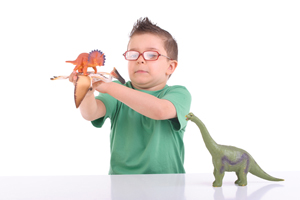