For my daughter's 5th birthday we had a Disney Princess dress up party.  I ordered the deluxe Disney Princess Birthday Package online from Birthday Express.  The package included everything I needed from invitations to tableware and decorations.  The price was comparable to any other retail store, but so much more convenient. Invitations were sent out 2 weeks in advance and on the inside cover we included the message "It's a dress up party! Dress up clothes will be provided or you may bring your favorite from home."

The night before the party we decorated the dining room with pink tableclothes on the dining table and buffet, and tied tool bows around the backs of all the chairs.  We made flower bouquets out of tissue paper and used those as centerpieces.  We draped the crepe paper streamers from the ceiling twisting and crossing in the center of the room and hung posters of the Disney Princesses on the walls.  We hung a Disney Princess heart shaped pinata filled with candy and other fun fillers (also ordered from Birthday Express) from a hook on the ceiling.  We rolled the plastic flatware in pink paper napkins and secured them with lilac curling ribbon.  We then set a place setting for each of the guests which included a placecard decorated with a disney princess sticker (to make it a more formal) and all the Disney Princess tableware included in the package. We waited until the morning of the party to decorate with the pink, white, and lilac colored helium balloons to ensure they lasted through the party. The dining room really looked festive with all the themed partyware fit for a princess.

As each guest arrived they began working on decorating a gold colored cardboard crown.  The princesses were provided shimmery stickers, adhesive rhinestone jewels, and glitter pens to create a crown to their liking.  After the girls finished their crowns they each had a mini makeover.  We applied a little lipgloss, a pale pink blush and some body glitter which was just enough to make the girls feel special without overdoing it.  We then began the first game "pin the fin on Ariel." Before the party I took a copy of an Ariel coloring sheet to a local printer and had them enlarge it to poster size my daughter then colored it herself which made it more personal we hung this on the wall in our living room where all the activities were taking place.

For the game each princess was given a green crepe paper streamer (the fin) and was blindfolded and asked to pin the fin on Ariel.  The girls really enjoyed this, and it was fun watching the girls witnessing yell "higher, lower" and "that's the spot" Everyone was a winner for participating and was awarded a green bead we called "Ariel's Jewel." We palyed the song "under the sea" from The Little Mermaid movie while the princesses played this game.

The next game was "Jasmine's musical carpets"  This game is just like musical chairs, but we used pastel colored felt squares to represent the carpets. We played the song "A Whole New World" from "Alladin" while we played this game.  As each princess lost a carpet and was out of the game she was awarded  "Jasmine's Jewel"-a purple bead.

The next game we played was our rendition of hot potato a game my daughter called "Don't touch the spindle" The princesses passed around a toy spinning wheel to the song "Once Upon a Dream" from the movie "Sleeping Beauty."  The princess left holding the spinning wheel when the music stopped was asked to find a spot on the floor and fall asleep.  The last princess left standing woke up all the sleeping beauties with a Hershey's Kiss.  Each princess was awarded "Aurora's Jewel"- a pink bead.  Next we played "Snow White's Charades"  The birthday princess was first to act out one of the characters from snow white.  To make this fair and so everyone wouldn't act out the same character they had to draw their character from a jar.  We included all the dwarfs Sleepy, Sneezy, Happy Bashful, Dopey, Grumpy, and Doc as well as Snow White, The evil queen, and the prince.  This game was really cute to watch, and the princesses had a great time acting out the characters. We played "Some Day My Prince Will Come" in the background during this game.

Each girl was given a white bead for participating in this game which we called "Snow White's Jewel." Next there was a knock at the door and every princess in the kingdom was invited to the royal ball, but they were told they must clean the palace before they left.  We brought out feather dusters and dusting rags, a broom, mop, and dust pan and the princesses got to work cleaning up the palace.  When their chores were complete they went to my daughter's room where their fairy godmothers (my mother and mother-in-law)helped them get ready for the ball.  For this we purchased a trunk of dress up clothes and used ballet recital costumes, and flower girl dresses.  We had feather boas, plastic jewelry, and of course every princess wore her crown.  After all the princesses were ready we then presented each one to the court announcing their arrival down the hall into the living room as Princess (first name) of the house of (last name).  This was a great photo opportunity and the other mothers at the party loved it.  The girls really felt like princesses.  After the presentation every princess was given "Cinderella's Jewel" a pale blue bead and lead to the ballroom (the dining room).

In the ballroom, they enjoyed their feast of chicken salad finger sandwiches, potato chips, friut salad,carrot sticks and ranch dressing, and punch. We also had a veggie tray and spinach dip and crackers for the adults.  All the food was served from crystal platters and bowls and the punch was served from a crystal punchbowl which made the banquet look very royal.  The spinach dip however was special.  A day before the party I had hallowed out a small pumkin and painted it to resemble Cinderella's coach I then added two plastic horses in front of it and added cucumber circles for the wheels.  I covered a tray with leaf lettuce and placed the coach in the center, filled it with spinach dip, and placed the crackers around it on the tray.  It was quite simple, and very impressive.  We then sang Happy Birthday and my daughter blew the candles out on her cake I made to look like a castle using ice cream cones to resemble turrets.

After the princesses enjoyed their cake and cookies they were led back to the living room to dance like Belle at the ball.  They spun around to "Something There" From the movie "Beauty and the Beast."  The princess were awarded a yellow bead "Belle's Jewel" after the dance.  I then gave each princess a Disney Princess favor bag, and they took turns pulling strings on the pinata until the latch was pulled and the loot fell out. The girls then filled their loot bags with the candy and pinata fillers they collected.

The princesses then went back to my daughters room to remove the dress up clothes, but were asked to leave behind one of their shoes like Cinderella.  While the girls dressed I flled their shoes with a jewely making craft string,a bead with their first name initial on it and a clasp. When they returned they made their princess necklace using the princess jewels they had earned during the party representing each of the Disney Princesses and their initial bead signifying that they too are princesses.  My daughter opened her gifts, and as the princesses left they were given an edible magic wand party favor.  I cut out Rice Crispy Marshmallow stars using a cookie cutter and sprinkled them with pink sugar crystals attached them to a bamboo skewer and wrapped them in plastic wrap secured by a pink ribbon.  They were really lovely.

When I sent out thank you cards I included a photo of the princess from the presentation at the party. I received many compliments from all the moms and they recommended I start my own party coordinating business. The girls all said they had a great time especially my daughter.  Many of the girls still wear their necklaces. It was a party my daughter will never forget. 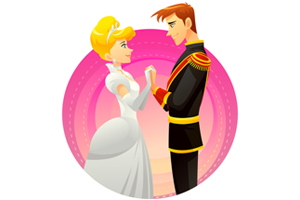