My son's 4th birthday fell on Super Bowl Sunday, so we decided to throw him his own Super Bowl birthday party at 1:00 that day.  To cut costs, ask your friends and family to borrow things like footballs, serving dishes, helmets, etc.  Also check with radio and TV stations for free things like banners, bumper stickers, pens, etc.

Here's a break down of what we did:
1) Décor: We were planning on having the party outside, until the weather turned cold.  We had to move it indoors to a ballet studio, but you may check on rooms at schools and recreation centers as well.  If you can have your party outside, I suggest planting winter rye grass 1-2 months before the party so you can have a green turf.  Then buy turf spray paint at Wal-Mart to paint your yard lines.

2) We were able to get banners from the local sports radio and TV stations to hang on the walls, or if outside use the fence (this looks likes the banners around the stadium).  Since the season was over, they gave them to us for free (our local NFL team didn't make the Super Bowl).   Be clever and make your own signs like people hold up on TV.

3) Use your favorite team's stadium blanket as a table cloth.  Serve food on football shaped serving pieces (about $3 at Party City, plus we had some).

5) We got a life-size cardboard cut out of a local NFL star from a grocery store.  It had been a display to advertise a soft drink.  We took each child's picture with him and later used photo corners to attach the picture to the front of a card as a thank you note.

6) Hang football pennants on the wall.

7) You could also decorate with other football gear, such as jerseys but we wore ours.

8) My daughter had a cheerleading uniform when she was an infant.  We used this on a doll for decoration.

10) For more decorating ideas, check out Garden Ridge and Party City stores, as well as www.activitytherapy.makesparties.com and www.PartyAdventure.com.

11) Play football themed background music.  We found Jock Jams which included songs like Who Let the Dogs Out, Bye Bye Bye, Whoomp There It Is, etc.  I could never find the ABC Monday Night Football song Are You Ready For Some Football by Hank Williams Jr, but that would be great.  Also, our local library had marching band fight songs on CD.

2) We got a submarine sandwich from Sam's, since we were indoors, but it would be nice to serve hot dogs if you can grill outdoors.

4) Gatorade juice boxes or other sports drinks, served in an ice chest. 5) You could also serve beverages out of a large thermos with a spicket (like they use to pour ice on the coach's head after a big victory).

Games & Activities:
1) We had a friend dress as a referee with a striped shirt and white pants.  He wore a whistle and stop watch around his neck and carried a yellow flag in his pocket.  He lead all the games.

2) We had the kids throw a football through a hula-hoop.  The kids were young, so parents held the hoop and moved it to make sure the ball went through.   The crowd cheered when they were successful, which made them beam.  You could make this into more of a competition for older kids.

3) The kids had a great time just running races.  It also tired them out and they took good naps later!

4) Buy a place kicking tee and have the kids kick the ball through the goal post.  My husband made goal posts out of PVC pipes, but later I saw a 4 foot inflatable one for $5 in the Oriental Trading Company catelogue (www.orientaltrading.com or 800-228-2269).  This would have been cheaper.  You could also use a soccer net to catch the ball, if the kids are old enough to kick it hard.

5) Face painting: paint NFL logos, or use NFL helmet tattoos.  We paid $19 for 144 tattoos at www.activitytherapy.makesparties.com, and also used them for favors.  We also bought an eye black crayon at Wal-Mart for $1 and put this on the kids.

6) The kids had a great time putting on the helmets and running around with the footballs.  We had several junior sized footballs for them to play with.

7) We also had a football pinata.

8) We asked everyone to wear football attire, such as jerseys, cheerleading outfits, referee uniforms, Super Bowl t-shirts or just a t-shirt promoting their favorite team.

Favors and Prizes: Try to find as many free favors as possible, here are just a few ideas.  I suggest starting your search early as some are sold out by Super Bowl time.
1) Mini Footballs, $2 for 2 at Wal-Mart, or check www.orientaltrading.com.

3) Pompons, from www.orientaltrading.com or www.activitytherapy.makesparties.com.

4) We got bumper stickers, pens and pencils from our local ESPN radio affiliate.

5) Mouth guards- $1 at Wal-Mart 6) I was in San Diego a week before Super Bowl 37 and got little Super Bowl pennants for $1 each. 7) Watch Jack-in-the-Box early in the season for antenna balls with Jack wearing your local team's helmet. 8) Stickers 9) Sports water bottles 10) Trading cards 11) Whistles 12) Megaphones 13) Trophies, medals or MVP awards

2) We used clip art to make 2 helmets face each other, in 2 different colors.

3) Above the helmets, it said, Are You Ready For Some Football?

5) The back of the ticket said HELP US KICK OFF JOHN'S 4TH BIRTHDAY, then had a picture of a football, with all the information printed inside: SMITH STADIUM: our address; ATTIRE: your favorite team's apparel.

6) We used the Happy Birthday stamps for postage, but I saw that the post office will be issuing football stamps in the fall of 2003!

HALF TIME SHOW: The Off Key Birthday Song Singers.  Under the football, it said: Failure to RSVP to 123-555-1212, will result in a penalty for unsportsman like conduct.

Good luck.  This was a FUN party for both the kids and parents! 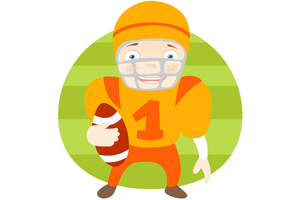