So, you've come up with a great theme and now you've got to figure out how to keep all those little party goers busy - Birthday Party Games of course!   You can always go with an old favorite party game or change a party game slightly to go along with the theme. Check out some of these birthday party game ideas.


PIN THE TAIL ON THE DONKEY - One of the oldest and most favorite party games.  But, it does'nt have to be a donkey. Change the donkey and the tail to match your theme!
Examples:
- Pin the butterfly on the flower
- Pin the heart on the tinman
- Pin the tail on the T-Rex
- Pin the tail on Pikachu
You get the idea.  Then each child is blindfolded and gets a try at placing the tail as close as possible to where it supposed to go.  The closest is the winner.

LIMBO "How low can you go?"- Always fun for kids of all ages! Set up a bar that can be raised or lowered, or have two people hold the bar. Play some music in the background and have everyone take a turn going under the bar. Everyone must go under the bar facing forward and leaning back! This birthday party game is really not that easy. The person who can go the lowest is the winner!

HULA-HOOP - Lots of fun especially if you are having a 50s or 60s party!  Just pick up one or two hula-hoops at the store and see who can hula-hoop the longest! A blast with older kids and young teens! A fun party game.

MUSICAL CHAIRS - Everyone hates to be the one left with "standing room only".  Just set up a line of chairs, one short from the number of players and start the music. Everyone walks around the chairs and sits down once the music stops.  Whoever is left standing has to drop out. Take away one chair so you are short one and start the music again. This continues until only one person has a chair.  They are the winner of this party game!

CAKE-WALK - Set up a circle of numbers on the ground and have everyone stand on a number.  Begin playing festive music and have everyone walk from number to number. Draw a number from a hat and then stop the music. Whoever is standing on that number when the music stops is the winner!  I have played this game at many school carnivals where the prize is a cake. But, you can give away something different.

SIMON SAYS - Simon says read on.  Get all the kids to stand at one end of your yard or large room.  Then Simon (probably mom or dad) gives the crowd an order beginning with "Simon Says". Example: Simon says take one giant step forward.  Then everyone does what Simon says. After a few of these you throw in an order without saying "Simon Says" and anyone who does it without Simon saying is out. Whoever follows only Simon's orders and is left at the end of the game wins!

DUCK, DUCK, GOOSE - A birthday party game for the younger crowd. All the kids sit in a  circle facing the center. Then one child walks around the outside of the circle and taps each child on the head (gently) and says "duck".   This continues on until the child touches someone and says "goose".  Then the child who was called goose jumps up and tries to tag the one who called them goose before they can run all the way around the circle back to the open spot they left when they got up.  Everyone's a winner.

WHO AM I? - Place a picture or a name of someone or something on the back of everyone at the party. Then everyone takes turns asking others questions about who they may be (what's on there back). The only answer you can give is  yes or no.  The first one to figure out who or what they are is the winner. I played this game one time at a company function where everyone was a star from a movie. I was Superman.  Of course superman was the last to figure it out! Another fun party game.

THREE LEGGED RACE - The classic picnic race game.  Have everyone line up in twos and tie one of their legs to their partners. Then start the race and see who can travel the fastest to a finish line.

SACK RACE - Another classic picnic race party game.  Have everyone line up and stand inside of old feed sacks or other large sacks. Then start the race and have everyone hop to the finish line.  The first one there is the winner.

EGG RACE - And yet another classic picnic race party game.  Have everyone line up with an egg on a spoon.  Then start the race and the first to cross the finish line without dropping the egg is the winner.  If you use hard boiled eggs, then you can eat all the eggs after the race is over.

DANCE CONTEST - Play some old Chubby Checker "Twist" music and see who can twist the best!  You will just have to pick out a judge and let them pick the winner.  Of course it does'nt have to be the twist.   It could be the Macarana.

HOT POTATO - Everyone sits in a circle and passes the potato from one person to the next. Someone calls time or stops the music and the person left holding the potato is out. Continue until there is only one person left. Maybe this could be chaged slightly and called Hot Pikachu?

Do you have any more fun party game ideas to play at a party, well send them in an let's all share ideas! 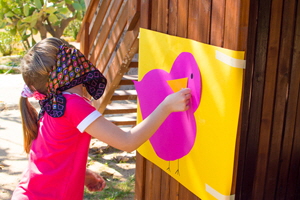