My  daughter wanted a Hello Kitty party for her 5th birthday.  Since we were inviting more boys than girls (12 boys/8 girls), I decided to do a Hello Kitty Treasure Hunt party.

INVITATIONS:  I ordered personalized invitations from Ebay.  I chose one that had a picture of my daughter on the right side and Hello Kitty wearing a ballerina dress on the left side. The background color was pink and they were printed on photo paper.  The  invitation said Lily is turning five and we are having a kitty-bration.  Join us for a purr-fect day”  and it followed with the date, time, location, and rsvp.

DECORATIONS:  Since the weather forecast was predicting warm, sunny weather,  I decided to have the party at a local park.  The park has several pavilions with picnic tables, which can be rented by the hour.  I found white vinyl tablecloths with hot pink and lime green polka dots at Our local Dollar General, so I used these on the four picnic tables.  I tried to find decorations that would be easy to transport and wouldn't take too much time to arrange.  We have a helium tank at our business, so I filled 20 hot pink, 20 lime green,  20 white, and 1 extra large Hello Kitty mylar balloon with helium and tied them  with bright green or pink curly ribbon.

I made balloon weights by filling empty 20 ounce water bottles with sand and I used lime green tissue paper to paper mache them.  When the paper mache dried I painted them with glitter glue and added a Hello Kitty cut out to each one.  I made balloon bouquets by tying two of each color balloon to each bottle.  I put one bouquet one on each side of the entrance, one in each corner of the pavilion, and one in the center of each table and I added the mylar balloon to the gift table. I used lime green and hot pink streamer, which I twisted and draped to resemble waves around the edges of the ceiling.  I made a place mat for each child by using bright green printer paper.

I drew an image of Hello Kitty's head on cardboard and used it as a template to make 20 cat faces on regular printer paper.  I colored in the whiskers, eyes, and nose and then cut and glued these to the center of the green paper.  I used a hole puncher to make small white circles from the left over  white paper and glued a line of dots to the top and bottom of each paper.  I also made pink paper bows and glued them to each cat.  I bought bright green material to use for pirate sashes, so I used the left over to make table runners for the tables.  I cut the tops from 10 milk jugs and  used hot pink tissue paper to paper mache them.  I put craft supplies in these and placed these on two of the tables.   I bought one lime green and one hot pink ice bucket and several lime green and hot pink serving platters and bowls from dollar tree for the food table.   I used lime green plates and napkins and bright pink utensils.  I made white paper napkin rings and my daughter used her hello kitty stamp set to decorate them.

COSTUMES:  Upon arrival we used costume make-up to draw kitty whiskers and noses for the children, however most of the boys chose pirate beards and mustaches instead.  I made cat tails for each child (easy with a sewing machine) using white faux fur.  I also made cat ears for the girls by cutting triangle shapes from the same material and hot gluing them to white head bands and then hot gluing a hot pink polka dotted bow to each one.  About a year ago, I found an online store (Halo Heaven) that sells really pretty 3 layer tutu's for $2.25 each.  I have been looking for an excuse to purchase these, so I decided to buy a hot pink tutu for each girl.  I used safety pins to attach the cat tails.

Prior to the party I asked the mothers to dress the girls in leggings and pink or white shirts.   I also purchased hot pink, lime green, and white ribbon wands (12 for $6.00) from the same store for the girls, which were given to them later.  I purchased a craft kit from OTC, which included everything to make black foam pirate hats and it also had foam pirate stickers.  I assembled these before the party and used bright green craft paint to write everyone's name on their hat.  I also made a pirate sash for each boy using bright green knit material and gave each boy an eye patch.  The boys also later received foam pirate swords with green handles (bought from Dollar Tree).

ACTIVITIES:  As the children finished with costumes, they decorated white gift bags (purchased from OTC from the less than perfect section 12/$1.29. I pre-cut black strips, white triangles, black ovals shapes, colorful bows, and yellow oval shapes.  I also provided wiggly eyes, markers,  and glue sticks.  I showed the children a couple of examples and told them to transform their bags into a cat.  They used the markers to write their name and decorate the other side.

GAMES:  The prizes for the games were assorted Hello Kitty items (bracelets, activity pads, hair ties, etc.) purchased from E-bay, similar pirate items, and other non theme items (left over from school goody bags or previous parties).  I put these inside a homemade treasure box and let the winner choose a prize and place it in the previously decorated bag.

1. Chase The Kitty Tail:  I used a piece of tape to attach a long strip of streamer to each child’s back.  The object of the game is to chase everyone and try to stomp their tail until it is removed.  The last one to still have their tail wins.

2. No Dogs Allowed:  Before the party, I blew up about 50 balloons and used a black marker to draw a dog face and ears on each one.  I also inserted a pink ticket into 18 of them.  The object of the game is to grab a balloon and sit on it until it pops.  Once you find a pink ticket, you receive a prize from the treasure box.  I put 18 tickets, so that each child would receive a prize.

3. Drink Your Milk Race:  This is a fun game, which I found on this website.  I placed milk in disposable bowls and told the children that they had to get on their hands and knees and drink the milk like kittens.  The first one finished is the winner.  The older children thought this was hilarious.

4. Musical Kitty Paws:  This is played like musical chairs, except I used kitty paws (cut from white cardboard) instead of chairs.

5. Treasure Hunt: I divided the children into two groups according to age.  The clues for the younger children were mostly simple rhyming clues and they were lead by my fourteen year old niece.  The clues for the older group were more difficult puzzle or riddle clues. The clues were written on Hello Kitty paper.  The prize for the treasure hunt were foam swords for the boys, ribbon wands for the girls, and a pinata.

6. Hello Kitty Pinata:  I made a pinata in the shape of Hello Kitty's head from foam board a tissue paper.  Since the ages of the children ranged from age 2 to age 14, I placed a zip lock baggy full of candy for each child inside the pinata.

FOOD and CAKE:  We grilled hamburgers and hot dogs.  I also had chips, corn on the cob, baked beans, and a veggie tray.   I bought a 3-d Hello Kitty cookie cutter set from E-bay and made and decorated a cookie for each child (they were really cute, but took way too long to assemble and decorate).  We had Hello Kitty juice boxes (belly washers), pink and green Gatorade,water, and soft drinks.  I made cupcakes with white icing and I brought several types of colored sugar and sprinkles, so that each child could decorate his own cupcake.  I also put a candle on every cupcake, so that everyone had a candle to blow out.  Although I enjoy making birthday cakes, my daughter wanted a Hello Kitty cake that she saw at the bakery, so I agreed.

PARTY FAVORS:  Along with the costumes, wands or swords, and candy from the pinata, the children chose two more prizes from the treasure box to put in their kitty bag.

THANK YOU NOTES:  I printed notes on Hello Kitty stationary and let my daughter sign them. 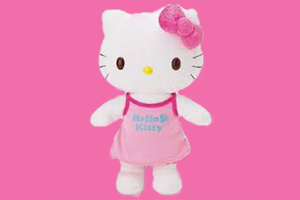