DISNEY'S LILO & STITCH BIRTHDAY PARTY - 6-Year-Old  We planned a Lilo & Stitch Hawaiian Birthday Bash for my daughter's 6th birthday. (The party was yesterday, and boy, am I bushed!)

INVITATIONS: We created the invitations on the computer, printed them on sand-colored paper, then burned the edges with a match. We rolled each invite up, tied it with raffia, then put it inside an empty and dry water bottle, along with sand and seashells. The bottles were labeled with the invitee's name in both Hawaiian and English. (I found a website that has tons of English to Hawaiian name translations.) These can either be mailed or hand delivered. Lots of the parents told me that their daughters loved these invitations and were really excited about the party. The parents also talked about how the invitations were neat and looked so elaborate. Actually, they didn't take that much time and were fun to do.

DECORATIONS: We began by covering the front door with the word "ALOHA" (each letter was 8 1/2" x 11") and pictures of Lilo & Stitch. (I had scanned pictures of Lilo & Stitch from a coloring book, and they were so handy! I used them on the invitations, name tags, mailing labels, thank you notes---everywhere.) On the path leading to the front door my husband put tiki torches to light the way. Inside we had a small tiki hut made from a cardboard box and raffia, cardboard palm trees, paper lanterns hung from the ceiling, and tables decorated with sea shells. The food table was decorated with conch shells, tiki candles, a hula-dancing Lilo doll and a stuffed Stitch. We also had a CD player playing Hawaiian music and the soundtrack from "Lilo & Stitch".

FOOD: We tried to keep it simple by having hot dogs and chips. The punch was just Hawaiian punch mixed with ginger ale. (If you make some in advance and freeze it in ice trays, you can put them in a ziplock bag and easily smash them into that good, slushy kind of ice that makes the punch so much better.) We also had fruit kabobs made with pineapple chunks, grapes, and star fruit. For dessert we had cake, cookies, ice cream bars, and heart-shaped boxes of chocolates with Elvis on the front (Lilo loves Elvis, you know!).

CAKE: The cake was fun to make. It was a beach scene. Half of the cake was the ocean (blue frosting swirled in waves) and half was the beach. I crushed vanilla wafers and sprinkled them over a light layer of white frosting and it looked great. I bought candy rocks, and placed some at the "water"'s edge, and some in a circle on the "beach". The candles went inside the rock circle to make a campfire. Behind the campfire I placed figures of Lilo & Stitch that came from McDonald's Happy Meals. I added a palm tree to the back corner and it looked terrific!

TREATS: I bought a plastic beach pail for each guest and labeled it with a picture of Lilo and the girl's name in Hawaiian. Inside each pail I put a Hershey candy bar with a special, home-made wrapper. The wrappers had a picture of Lilo and said, "Enjoy this kokolea as Allyson's way of saying 'Mahalo Nui Loa' for coming to her party! (That means 'Thank you very much' in Hawaiian!)" Each girl also received a Hawaiian lei for her neck, two for her wrist and ankle, and a plastic headband onto which I had glued flowers to match the leis.

Their favorite party favor, though, was their grass skirts. I had thought of buying them, but at $4-$5 each that was a little too steep for 13 guests. So I made grass skirts from green crepe paper streamers and twine. I used one small roll of crepe paper for each skirt. I cut strips about 4' long, folded them in half, punched a hole at the top, and threaded them onto the twine. Then I glued the top of each streamer to the top of the next streamer on one side, spacing them equal distances apart (does that make sense?). It took me about 15 minutes to make each skirt. It was a lot of work, but they only cost about 50 cents each and the girls absolutely loved swishing around in those skirts!

ACTIVITIES: We began with the Limbo, using a bamboo pole and a CD of the "Limbo Song". The girls loved it (and those little buggers are limber!). Next we played "Pass the Coconut" like the old game "Hot Potato". Then we had a Hula-Hooping contest, taking turns in groups of three. After that we had a game of "Pin the Guitar on Stitch". I had scanned another coloring book picture of Stitch dressed like Elvis and playing the Guitar. I cut the guitar out of that picture, filled in the missing lines, and enlarged the picture with an opaque projector. I took the guitar I had cut out, scanned that, enlarged it to full-sheet size, and printed out copies on colored paper so each girl's guitar would be unique.

After that game it was time to eat dinner, but first we had to blow the conch shell like they do at luaus! I blew it once so they could hear it, and then they all had a try. (After we ate I had to remind my daughter that it was time to open presents, which told me she was having a lot of fun!) After presents, we moved on to more fun--on one wall we had hung a blue plastic table cloth half on the way and half on the floor, and put blue cellophane on top of that. I had taken a small ironing board, covered it with inexpensive, bright fabric, and placed it on the floor on the lower half of the tablecloth, as a surfboard. One at a time, the girls got on the surfboard, struck a surfing pose, and I took their photograph. They really liked doing this, and the pictures are going to make excellent additions to the thank you notes.

Next we moved to the most popular part of the evening--HULA DANCING! My teenage niece taught the girls some hula steps and hand movements, and they spent about 10 minutes just hula dancing and having a great time. Then, the last event of the party--the palm tree pinata! The girls loved taking turns knocking that thing around. (I think my favorite party moment was when one little girl missed the pinata and whacked my husband in the leg with the baseball bat!) I had also planned some other games in case we needed fillers: "Steal the Coconut" (Steal the Bacon), "Musical Beach Towels" (Musical Chairs), and a Coconut Relay where they roll the coconut down and back with a broom. We didn't need these games but it was good to have them ready just in case.

GAME PRIZES: We bought coconut ukuleles, which were really fun and fit right into the theme. My sister found some Beanie Baby-type bears that had the word "Aloha" embroidered on the front, and a hula girl and palm trees embroidered on the back--perfect! I also had a Lilo & Stitch storybook and a jumbo flower pinwheel to give away.  All in all, it was an excellent time. Everyone had fun, and the girls and parents both thought it was a really terrific party! 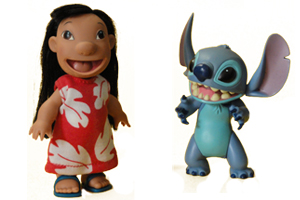