My son loves all things Mario.  So for his 7th birthday, I planned a Mario party.

For the INVITATIONS I cut orange paper into rectangles 4 inches by 8 inches and then folded in half.  I glued an image of a question mark box to the front.  On the inside, I glued an image of Mario and Luigi.  I also wrote: GET POWERED UP . . .  AND READY TO CELEBRATE ____ 7th BIRTHDAY!  JOIN US FOR SOME SMASHING AND MUNCHING FUN AT ____ Castle.  I then put the address, date, time, and RSVP information.  I found square envelopes at a craft store to place them in for mailing.

For DECORATIONS I covered boxes I had collected with brown paper bags and then put brick wall paper on one side.  I got the brick wall paper from a local scrapbooking store.  I coved cube shaped facial tissue boxes with orange paper.  I filled each box with different number of toy coins, and then put a question mark on one side and orange tissue paper on the top.  I later used these boxes for an activity and gift box.  I made mushrooms out of balloons and white paper.  I filled balloons with a toy coin before blowing up because the balloons were going to be used for an activity.  After blowing up the balloons, use legal size paper cut into strips about two inches wide to wrap around the bottom.  The balloons should sit in the loop of paper like Easter eggs sit in paper stands.  I taped the paper to the balloons so they would not separate.  Draw black eyes on the paper.  Cut out several two inch diameter circles.  I used my circle cutter, but you can trace a votive candle.  Then tape them to the balloon for spots.

I covered several buckets of different sizes with green plastic table clothes.  I added a strip of green paper to the top to make it look more like the green pipes Mario travels in and over.  I scattered the brick boxes, question mark boxes, green pipes, and mushrooms around the room in small groups to look like the scenes in Super Mario Brothers.  I also bought several helium-filled yellow star balloons to add to the decorations.  I didn't find Mario tableware in my local party store, so I just used red, green with a blue tablecloth.

I used my cake stand to decorate the table with the mushroom cupcakes.  I made the CUPCAKES in white paper liners.  I iced them in red and green with white spots.  I then taped a small strip of white paper around the liner with eyes drawn on.  The strips were about 1.5 inches wide.  I served them with ice cream and juice boxes.

As kids arrived they were given a red Mario or green Luigi hat.  The HATS were made out of fleece.  I got a half a yard of fleece for every two hats, but if you get one yard you might be able to squeeze on five hats.  You need a 5 gallon bucket lid or a 12 inch diameter circle and a butter tub lid or 4.5 inch diameter circle.  Fold the fleece in half.  Trace the 5 gallon bucket lid with any marker.  Cut out the two circles.  Keep the leftover corner to make the bill of the cap.  To make the bill, round the leftover corner and trim the thin ends.  Sew the two sides of the bill along the outer/rounded side.  Turn right-side out and set aside.

On one of the circles, trace the butter lid in the middle and cut out the circle.  This will become the head hole.  It seems small, but fleece will stretch to fit any head.  Pin unsewn side of the bill to the head hole and sew.  Pin the two circles together with the bill side inside.  Sew around the outer edge.  Turn inside out.  Cut out 3 inch diameter circles out of cardstock or craft foam.  Write M on the circles that you safety pin to the red hats and L on the circles for the green hats.  Safety pin the circles above the bill.  I had several ACTIVITIES planned.

First kids made EDIBLE PIRANHA PLANTS.  Kids put monster teeth on extra large marshmallows.  Kids covered the rest of the marshmallows with red fruit roll-ups.  Then the covered marshmallows were stuck on a craft stick.  The kids wrapped the craft sticks in green fruit-by-the-foot and used some to make leaves to attach to the stick.  The piranha plants were then stuck into the middle of a green cup filled with marbles.

The kids played PIPE TOSS as they finished their piranha plants.  I collected the decoration pipes from the room and grouped them close together.  The kids were then given 10 balls to toss into the tubes and they got points for each successful toss.  The winner and birthday boy got to go first in the next game.  I continued this idea with the other games.  After the game the pipes were returned to their location.

Then we played QUESTION MARK PUNCH.  The kids went in pairs around the room to find the question mark boxes.  They gently punched through the top (where the tissue paper was) and counted the coins found inside.  I then wrote their name on the box so it could be used as the gift box.

Then we played STOMP THE MUSHROOMS.  The kids spread out with the mushroom decorations and began popping them.  The kids collected the coins as the balloons were popped.  Then we collected STAR BITS.  I had extra fish tank jewels to use as star bits, but you could just cut out paper stars.  I printed a secret message that the kids had to find the letters for.  It was like hangman, but the kids had to find the letters around the room.  I taped a letter on each star bit.  To help the kids each word was a different color.  After collecting the star bits from around the room we figured out the message was to eat cupcakes and ice cream.

After eating the kids broke open the CHOMP PINATA.  I got a ball pinata and painted it black with a mouth (red and white) and eyes.  I then taped a black paper chain to the hanging loop.  I filled it with Mario fruit chews, gold coin chocolate and other candy.

Lastly, the kids played a board game version of MARIO KART.  I picked the Ghost Valley track.  I used two sheets of black poster board for the back of the game board.  I glued wood plank paper in the shape of the track.  I got the paper from the local scrapbook store.  I then glued King Boos around the track for decoration.  I also printed the name of the track on the board.  I traced squares for the karts to move along the track.  In some squares I put a question mark box.  I printed out images of characters from Mario Kart and taped them to small blocks as the markers for the game.  I made two dice.  One die was numbered and the other had images of things you get in question mark blocks.  I taped the numbers and images onto cube blocks.  The kids rolled to move around the track.  When they landed on the question mark box they got to roll the special die.  The banana made the person behind you go back one space, the bullet let you pass one person, three mushrooms let you go ahead 3 spaces, green turtle shell the person in front of you went back one space, red turtle shell you picked one person to go back one space, and blue flying turtle shell the person in first went back 3 spaces.  I was surprised at how much the kids loved this game.

The kids FAVORS were their hats and question mark box filled with their pinata treats, and edible piranha plant.  I also tied a star balloon onto the box. 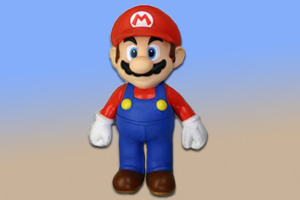