For my daughter's ninth birthday, we had a Narnia/Lion Witch and Wardrobe birthday party.  The invitations included a map of Narnia, printed using the map available with permission from Walden media through Narnia web.  Along with the date, time and place, the invitation announced that we would eat lunch at Mr Tumnus' house.  It requested that parents RSVP to the queen of Narnia.  When parents called to RSVP, I did my best evil queen impression.    As children arrived, my husband ushered them to the kitchen, which we had decorated to look like Tumnus' house.  We lit candles, set out old books, and even found a lion statue to stand on a table.

We moved our kitchen table to the living room for a gift table and put a longer folding table with adjustable legs in the kitchen.  The table was low, so the children sat on cushions on the floor around the table.  We set a slide flute, ordered from Oriental Trading company and painted gold with spray paint, next to each plate.  Throughout each section of the party, we discussed the book/movie and what had happened to correspond to our activity.  As the activities progressed, the children began to anticipate the next parts of the story.

As the children finished tea sandwiches, cookies and lemonade, I crept away to change into my white witch costume.  I then summoned each girl to come warm herself with a cup of hot cocoa and some turkish delight.  Everyone tried the turkish delight and drank the cocoa, served in fancy goblets I found at an antique store.

After I changed into regular clothing, the children played a hide and seek game similar to Sardines.  All but one were beavers.  That one child was the wolf, and that child hid.  When one of the beavers found the wolf, that beaver would cry out, "Run!"  All the beavers would try to escape before the wolf could tag them.  Next, we went to the gift room and discussed Father Christmas bringing presents.  We decorated the room with a Narnia bulletin board set we purchased at a teacher supply store and Christmas decorations.

The children went outside to find the hidden present Father Christmas left for them.  The package was wrapped several times with candy, small gifts, money and costume jewelry in each layer.  (Once again, oriental trading company as the source.)  The children passed the package to music and each child unwrapped a layer when the music stopped.  The final layer contained a copy of the book, The Lion The Witch and The Wardrobe.  Then, my daughter opened her presents, and we took pictures of each girl with my daughter for thank you cards.

Next, we played sleeping lions, a game where the children lie on the floor ina  circle and look up at the person who is "it."  It tries to make the other children laugh.  It is amusing to look up at a friend, so there were lots of giggles during this game.  Finally, the girls went to Cair Paravel, where we had set up supplies to make crowns and necklaces.  The necklaces were choker style, made with ribbon clasped in back and decorated with vintage buttons glued to a piece of felt, cut out and glued to the ribbon.

The crowns were made with headbands painted gold with gold chenille stems wrapped around them in a crown-like pattern.  The girls took their time selecting buttons and decorating their crowns.  The party was a big hit.  I heard about it the next Monday when I arrived at my daughter's school.  One of my daughter's teachers approached me to let me know how thrilled all the girls were. 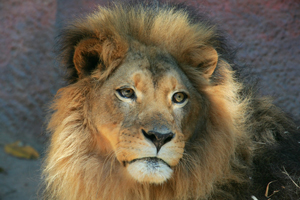