We had a wonderful time preparing for our daughter"s second birthday.  It was a "Horse" theme to her, a Western Birthday to us!  For invitations, I printed "WANTED" posters for each child (just 5x7), saying WANTED: (childs name)for being a Fun-loving Cowboy (or Cowgirl)  Please bring to (our address) at (date & time of party)  REWARD: Birthday Cake, Ice Cream, and a boot-scootin' good time!   Then I burned the edges of the invitations to make them look like old-fashioned wanted posters.  I used my label making program to put horses on labels with the kids' names on them for the mailing envelope.

We painted a Big Screen TV cardboard box barn red, and painted a door on it.  The kids were able to get in and out of the back door and stick their heads out the side windows (stalls) we cut in the box.  We cut round holes in the front of the "barn" and used them for the "barnyard animal toss" where the kids took small stuffed barnyard animals and threw them through the holes for points.  (They were mostly 2 & 3 year olds, so the holes had to be big)  On the other side of the "barn"  we painted a horse, with no tail.  I cut out tails for each child and wrote their names on them, then we did "pin the tail on the horsie."

Most time consuming was small stick horses we made from pine:  we cut out a horse head from a 2x8 block of wood, sanded and painted it, then drilled a hole for the stick and used a leather strand for the bridle.  Each child took one home, but when they arrived, the horses were all sticking out of the holes in the barn!  The kids got SO excited!

As soon as a child arrived, we gave them a goody bag, which had a bandana, a sheriff's star, and Western stickers (all from Party Express & Oriental); then we gave them a vest (we made them from felt w/little black fringe, but they can easily be made with brown paper bags as well!) and they chose their horse on which we quickly wrote their name so they wouldn't get mixed up (2 year olds are very territorial!)

They were also given a straw hat (very economical from Oriental Trading).  We had them climb up on my daughter's rocking horse, and took their picture in the their Western Attire.  The pictures were later used for the thank you notes in pre-made card/frames I found online for about 30 cents each.

Besides Pin the Tail on the Horsie" and the Animal Toss, we had a "cake walk" where the kids all walked around a circle (to western music of course!) and stopped on a numbered horseshoe made of tagboard.  The birthday girl drew a number and the child on that number won a prize (actually a cupcake).

The last game we did was the Pinata, which was a horse.  Warning about this though…you may consider using a boot or other western-type pinata rather than an animal pinata, 2 year olds have a hard time understanding that they're not hitting a live horse, they're ALL real to them!  My 2 year old was shocked to see the horsie fall apart!

The cakes were horse heads, easy to make by just cutting a rectangular cake diagonally, then taking the two diagonals and jutting the bottom of one up against the side of the other.  With a knife you just trim off the square edges to round out the horse's head, frost, use a gumdrop for the eye & licorice for the bridle & mane.  TIP: Freeze the cakes before trying to cut & frost them,then they won't crumble!

By the time all was said and done, the gifts were opened, etc, we realized we had been there for 3 1/2 hours!  Luckily, they were having so much fun that they were well-behaved! 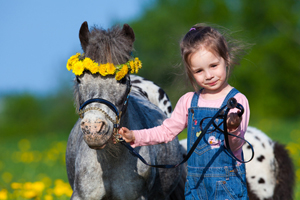