My daughter had a Powerpuff Girls party for her 3rd birthday.

INVITATIONS:  I scanned the Powerpuff Girls' logo from a sticker into my computer.  Then using MS Publisher and Paint Box I designed an invitation and printed them out on pre-cut cardstock.  My daughter used the stickers for decorating the envelopes.

DECORATIONS:  The party took place in a room at a local recreation center, so the decorations were limited to 100 helium-filled balloons in "Powerpuff Girl colors", tablecloths in the same colors plus two "official" Powerpuff Girl tablecloths, and a Bubbles piñata.  The tablecloths were used to designate areas craft, present, snack/drink, food/cake, eating, etc.  Additionally, we fenced off a corner and filled it with toys for the under-12-month-old siblings Junior Powerpuffers.  Prior to everyone's arrival, I set-up a craft area with pre-assembled craft kits and instructions for the kids/parents.  This kept people occupied while waiting for everyone to arrive.

CRAFT:  I designed a Bubbles Refrigerator Magnet Clip using felt, clothespins, magnetic tape, and wiggly eyes.  To keep it simple enough for three-year-olds, I limited the number of steps to assemble the craft to five.  I pre-cut all the felt pieces, stuck the magnetic tape on one side of the clothespins, and assembled individual "craft kits" for each child.

Each "craft kit" was a zip-lock bag with all the parts necessary to assemble one magnet clip including a glue stick (a very important item to include in order to avoid any potential sharing issues).  Once finished, the kids/parents labeled the zip-lock bag and stored the magnet clip inside.  I found the labeled zip-lock bag worked beautifully in preventing any identification problems at the end of the party.

FACE PAINTING ACTIVITY: I painted a Powerpuff Girl on each child's face.  The Powerpuff Girls' faces are easy to draw so anyone can do this with very little practice (some kids wanted other things painted so be prepared to improvise).

GAMES:
1. BALLOON TREASURE HUNT.  This is a treasure hunt/matching game tailored to three-year-olds.  The object is for each child to find the four ingredients of a Powerpuff Girl (sugar, spice, everything nice, and chemical X).  The "ingredients" are hidden on top of helium-filled balloons.   Prior to the party, I drew one symbol to represent each ingredient (e.g., purple triangle with a black X in the center for chemical X, red heart for everything nice, etc.).  Each symbol was approximately 2" x 2".  I then made color copies of the pictures on stiff paper and cut them into 2" x 2" squares.  I made 2x the number of copies of each symbol as kids expected (e.g., for 10 kids make 20 copies of each symbol for a total of 80).

Additionally, I made a larger card (5.5" x 8.5") for each child with all four symbols on it.  On the morning of the party, I used double-sided tape to stick each square to the top of a helium-filled balloon (we had 100 balloons and 80 of them had a square).  The balloons were tied with long ribbons that the children could easily reach.  The object of the game was to find one of each of the symbols and attach it to their game card.  The kids had a great time pulling down the balloons searching for the ingredient cards.  Once each child filled their card with the four symbols they won a prize.

2. PROFESSOR PROFESSOR WHERE IS BUBBLES?  This is a variation of Doggie Doggie Where's Your Bone.  Instead of a bone I used a Bubbles figurine and the kids said, "Professor Professor where is Bubbles, Somebody took her and she's in trouble."

3. PIÑATA  My daughter had her heart set on a Bubbles piñata, but I had a problem with kids hitting a little girl (Bubbles) with a bat.  So, we purchased a regular Bubbles piñata, cut a trap door in the back of her head and attached 20 strings to make it a pull-string piñata (19 strings easily pull off while 1 string opens the trap door spilling out all the toys and candy).  We found this to be a great solution.

PARTY FAVORS were a Powerpuff Girls Marker Set (and a bucket of chalk for the Junior Powerpuffers).  The party lasted 2 ½ hours that also included free time at the playground, lunch and cake. 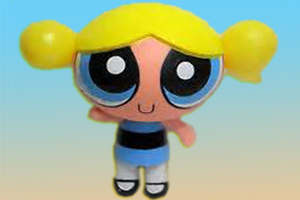