For my second son's first birthday, we had a rubber ducky theme. I must say thanks to this site.  If it had not been for this site, I woulldn't have ever have thought of such a cute theme or cute games. First, I read through all the ideas and went with ones that seemed to be duplicated and of course added my own touches.  Since all my friends and I have more than one child now, the guest list can be rather extensive.  The solution has been to hold two parties of 25 to 30 kids each with this party being the most babiest in theme.

For INVITATIONS, I took a bar of ivory soap from SAM's and wrapped it in yellow paper and glued on an orange card stock beak and googley eyes.  On blue card stock on the back of the "duck face" soap, I wrote:  Splish-splash it is a birthday bash!  Grab a ducky if you feel lucky.  Have some good clean fun now that Ryan is turning ONE!  I then included the date, time, location, phone number, etc.  I placed the soap in cellophane bags that had ducks and bubbles on it and place blue raffia on the bottom.  I wrapped the bags up with yellow twist ties.  I wanted to use yellow wooden ducks with blue raffia ribbon, but could not find any ducks.  Everyone called to tell me how adorable the invites were!  They were adorable and inexpensive.

The CRAFT was simple so that even the babies could participate. I had blue card stock paper with yellow paint handy so that they could make their handprints.  On the paper, I typed:  I am feeling ducky because you are my friend and for that I am lucky. I just wanted to say thank you for celebrating my birthday.  This is just a reminder of how your hand lookied like on that day.  Date.  Out of yellow paper, I precut circles and glued on eyes and beaks so that children could add these duck faces to their handprints in order to make little keepsake duck handprints.

For DECORATIONS I relied heavily on clear, blue, and yellow balloons.  I also had a bubble machine going.  I brought out towels and bathrobes too!  Out of orange and yellow foam paper, I made ducks and spelled out Happy Birthday name and strung them all together with orange yarn.

For the table, I took a two dollar white table cloth and previously went around to my friends' houses and had their children place a yellow handprint onto the fabric.  I then went back and wrote their names beside their print and took a black fabric pen and drew on faces and eyes and an orange fabric pen to make beaks. I wanted to place yellow feathers on the table, but could not find just yellow.  I am actually glad I did not do this after all since 30 kids can make a big mess!  I took two sand pails, filled with snacks and labeled them as duck food.

I used tons of rubber duckies and bath toys for additional deocroations.  I brought out a large plush yellow duck that gigles, wiggles, and lights up when touched.  The kids loved it!  I also had a keepsake book for the adults to sign and write comments about the birthday boy.

Aside from the cake, the FOOD was mainly chips, "duck food," "Quackers," and dips.  The CAKE was actually cupcakes with blue icing and one little duck candle for birthday boy and candy ducks for other children.  PLATES and other utensils were yellow and cheap.  Plus if I needed an extra activity, I could have kids make duck faces on them later.

DRINKS were sodas and juice boxes.  I did not want to risk blue punch being spilled on my white and recently cleaned carpets, so I did not do the adorable duck punch.  We had 30 children attending, so I kept the GAMES and PRIZES simple too.  I passed out cellophane loot bags with blue bubbles and yellow ducks on it for them to place their prizes.  For the first game, we went on a duck egg hunt where each child received candy as a prize for this game.  Next we went to the bathroom, where I had the tub filled with water and 30 rubber ducks.  The older children 3 to 11 tossed rings and then received a duck as a prize.  The younger ones grabbed their ducks.  The parent of the child who got the wettest won a towel!

Next we sang and danced to 3 duck songs.  The first song we sang was 6 little ducks.  I then had them sing the song in French.  The last song is really called the Chicken Dance, but we changed the name and sang I don't want to be a chicken, I don't want to be a duck, so I will shake and cluck.  For this I made up individual clear candy bags filled with candy corn for the older children and cheerios for the babies.  I filled the candy bags with the food and then stapled yellow card stock over the top.  I then put a layer of orange card stock with an orange stamped duck on yellow card stock cut out and glued on top of the orange paper.  In yellow I stamped Duck Food next to the duck.  Looked so cute!

We then went to the bubble machine and I popped the bubbles for which they received bubbles as a prize.  We had a ball pit for them to crawl through and search for candy.  The last game we played was a duck relay.  I divided the children into two teams.  They were to wear flippers and carry an egg to the basket.  Candy again was their prize.

GOODIE BAGS were again simple and inexpensive.  I took blue bags and stamped yellow ducks on them for older children and filled them with homemade yellow duck shaped soap in candy bags.  I again filled the bags and stapled this time blue card stock over the top.  I then layered with yellow card stock with blue bubbles stamps and labled with blue ink SOAP.  I also placed a yellow stamped, blue card stock duck cut out on it.  I had lots of compliments on them!  I wanted these to be soap crayons and wanted to make soap paint too, but none of the craft stores within an hour or more of me carried the proper type of soap needed.

I cut out yellow foamie ducks (when wet will stick to tub).  I gave them a wash cloth (5 for a dollar walmart) and duck shaped sunglasses (Oriental Trading). Plus they went home with their candy, bubbles, and rubber ducks.  The babies had larger blue bags with ducks filled with wash cloth, shampoo, lotion, bath toy, and their ducks.  Newborns received wipes.  Adult party favors included clear film canisters filled with blue Calcon placed inside pastel fabric baby shower favor bags.  I took white labels and wrote thank you on them.  Looked cute too!!

THANK YOUS were blue cardstock with yellow stamped ducks.  In them I included miniature bars of soap with Disney characters on it and wrote MINNIE thanks for making my birthday magical and clean.  Thanks to all before me.  You helped me make the party both fun and simple.  This party was also inexpensive considereing the size of the guest list since I made most of the items or found really good bargains.

The best part was that the parents appreciated the practical presents and I had a chance to visit with my family that came for the special day. I especially wanted to visit with my mom since she and my son share the same birthday!  Happy planning and keep those ideas coming.  This is the best site - I am so addicted to reading about all the great and creative ideas! 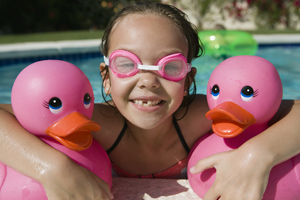