Animal Safari Party!  This is a fabulous party for four and five year olds, I did mine on a nice sunny day in spring but you can do it anytime of the year, even winter! We invited about ten kids, ranging in age from two to six, and everyone enjoyed it.

The invitations were made on the computer and were shaped like a tiger’s head. Inside the  tiger’s open jaws, there was a digital photo of my son pushing upwards, and it looked like he was trying to stop the tiger from eating him! Inside, there was this poem: Do you like monkeys, and elephants too? Do you like tigers and lions galore? Then swing over to Jack’s safari, Come and explore! It was the cutest invitation!

When the guests arrived, they stepped into the safari room. This was our dining room and I had put posters of animals all over it, some with signs pinned on them saying Most Wanted and Still to be caught. There was also a large map of Africa stuck on the wall, with colourful pins stuck in it, representing different animals I suppose. When they all had arrived, my husband stepped in. He was wearing a safari outfit with binoculars and a straw hat on. He put on a great Nigel Thornberry accent, and told the kids that they were going on safari, and they needed to find as many animals as possible. Whoever found the great Snuffle-lumpkin would receive a special prize. He held up a picture of the Snuffle-lumpkin, and hand-drawn poster of one of my son’s stuffed animals that doesn’t look like any animal known to humans. He then explained that they would set off on their adventure soon, but first they needed their safari supplies.

Each child got a safari hat, purchased off partypoopers.com for only three dollars each! They also got a jungle-themed bumbag, which I got from my local dollar store. Then they made safari nets. I bought cheap netting from my fabric store, and each child got a rectangle which I had folded in half and sewed at the bottom and side, leaving the tops open. They got a stick from the backyard and poked it through the top of one side of the netting, and masking-taped it to the netting to make it secure. They looked fabulous! Finally, in their bumbags, they received bags of trail mix made up of M&Ms, teddy bear crackers, raisins and some nuts. I also gave them a juice box (tropical) labelled Jungle Survival Drink, and a little notebook. It had a map of the jungle in it, as well as a full list of all the animals hidden in the jungle. On the front there was a picture of jungle animals, and they also got a matching pen.

Then they proceeded to the jungle. My husband informed them that he had a cage for the animals they caught, which was a very large cardboard box with strips cut out from the sides and the top open, painted black so it looked like the cage.  For the first jungle room, I had draped shredded green crepe paper all over the floor and furniture, and more pieces were hanging from the ceiling. I dimmed the lights and played Animal Party, a cd which I found on Amazon with some fabulous kids animal-related music on it, including In the Jungle. Then I hid stuffed animals everywhere, which worked well because of the masses of crepe paper and dimmed lights. It looked great! When a child found an animal, they scooped it up with their nets and took it to the cage and dumped it in.

There were two rooms for safari, the jungle and the lagoon. I blew up a large baby pool, filled it with shredded blue crepe paper, and inside hid some more stuffed animals, including fish and crabs. The lagoon room also had birds perched high up on shelves (they had to stand on chairs to get them) and the Snuffle-Lumpkin was hidden under a couch, with masses of crepe paper stuffed around him. Eventually the kids finished finding all the animals, and the little boy who got the Snuffle-Lumpkin received a very large stuffed lion, which roared when you pressed a paw. Everyone else got smaller stuffed animals, their pick from the cage, except I made sure that my son’s favourites were removed first!  Afterwards, we sat down and ate our trail mix and survival drinks, and then we played games- Pin the Tail on the Zebra, Safari Animal Bingo and we watched an episode of Tarzan, the tv series.

Then we had the cake. We didn’t have lunch because little kids don’t eat too much at parties, so I used the money I would have spent on lunch on other things. Anyway, the cake was shaped like a tiger. I used one round cake for the head, two cupcakes for ears, a squarish shape for the body and rectangle-shaped cupcakes for the two legs in front, so when I’d finished it looked like a tiger from a front view. On the body I wrote, Happy safari Jack! We also served animal crackers and vanilla ice cream, but we dyed some parts orange and black to look like tiger stripes! It was very cool!

Everyone went home happy with their bum bags, stuffed toys, hats and safari nets, plus I gave them lolly bags with animal crackers, animal-shaped lollies, balloons with animals on them and more. I think everyone enjoyed this party, and I know that we’re going to have some great photos! 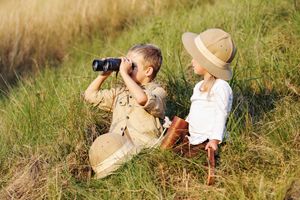