I was excited to plan a soccer-themed, double-birthday for my two boys, 8 and 11 years old but discouraged at the expensive soccer party decorations and lack of interesting games besides soccer drills available. Since I was 8 months pregnant and money was tight, I had to get creative, so here’s what I did.

INVITATIONS: Invitations were printed on a small dessert-sized white paper plate decorated with black marker to make it look like a soccer ball, with HEADS UP! You’re invited to Kick-Off Benji and Joseph’s Birthday! with the Kick off time, stadium location, and goal information printed below. We inserted these into a white balloon, blew it up and tied it off, and decorated the outside to make it look like a soccer ball (albeit egg-shaped), with a little card below that had instructions for popping it to get a surprise. We dropped them off at different houses on our errand day so it wasn’t too big of a deal, and kids really loved it.

DECORATIONS: Decorations were a couple of clusters of green, black and white balloons with a gold mylar star-shaped balloon tied together under yellow and black crepe paper streamers. I used a green plastic tablecloth that the kids drew a soccer field on with markers and sprinkled gold star confetti over. We hung extra soccer balls made by drawing with markers on paper plates from the ceiling along with stars we cut out from last night’s pizza box that we covered with aluminum foil. We also used orange construction paper to make orange cones for the main food table.

ACTIVITIES: The kiddos that arrived early were given a couple of white ping pong balls and two white balloons along with a black marker to decorate to look like soccer balls for games that we’d all participate in later.  We had a real soccer ball out on the table so they could practice their art skills, but we had to attach it to the table because the kids kept taking it and trying to play soccer with it inside the house.

GAMES: Balloon Soccer: When the rest of the kids arrived and the soccer balls were finished, I put them away and divided the kids into teams of 3 kids each and tied a short piece of crepe paper onto their arms to color-code each team. Then we went in the backyard along with a couple of parents and we played 3-on-3 soccer with a balloon in a small 20x20 foot area for each team. We had set up cones beforehand, and gave each parent a whistle and to take charge of one of the games.

Chin-to-Chin Soccer Pass: The kids lined up in two rows facing each other for this team relay. The first kid got a small soccer ball (about the size of an orange) and at GO! Tucked it under their chin and passed it to the person across from them, and then it continues on through the line, chin to chin. Their hands are clasped behind their backs because no hands are allowed.

Balloon Pop! Relay: I broke the kids into four teams, and each kid gets a soccer-colored balloon to hold between their knees and they hop/waddle to the finish line, where they pop the balloon by stomping or sitting on it, then race back to touch the next person on their team who waddles to the finish line to pop their balloon.

Roll Along: This team relay needs two kids per team. The kids hold two pieces of string (about 5 feet long each) between them, one string in each hand. The strings are pulled taut and separated enough so that a soccer-colored ping pong ball can rest on the strings. The goal is to make the ping pong ball make a round trip without falling off.

COSTUMES: The kids were invited (on the invitations) to bring their soccer gear, so most of them came in jerseys and shinguards. We had one adult who was a real referee so he had his outfit on. Another idea I had was to hire a local college student who was on the soccer team and have him help with the games and kids, and to do soccer drills with the kids during the in-between-game-times. Since I was so pregnant, the kids assumed I had a soccer ball hidden under my shirt, which was fine with me.

PARTY SNACKS: The pizza man arrived just after the games finished, and I also had out beforehand fruit, like orange wedges and grapes out on the table along with crackers and veggies. The kids also made their own party favor gifts of soccer cookies, which was a lot of fun. Before the party, I baked 3 round sugar cookies and gave them white icing to smear on (from a mixture of 1/4 cup powdered sugar and 2 tsp milk) with popsicle sticks, and when those were dry, they used the black Food Writer pens I got from the craft store to make the soccer ball marks. (I made extra-sure the regular markers were out of sight when they did this.) I had a parent pop each one into a baggie and set aside to be handed out when they left, so they could take theirs home (they also wrote names on each bag).

CAKE: Going for easy-but-not-store-bought, I made three dozen chocolate cupcakes and placed them right up next to each other to form a rectangle on a cookie sheet. I iced the whole lot at the same time with green icing. When the icing was nearly gone, I sprinkled in shredded coconut into the icing bowl, stirred, and then used this to finish icing the cupcakes so it looked like green grass. Onto each cupcake I put a small soccer toy: either a rubber soccer ball eraser, an orange rubber cone eraser, or a soccer candle (found online).

The piñata was a soccer ball shaped, and I am sure you can find these online, but it was fun to make it also. A week before the party, I had blown up a balloon part-way (so that it was still round, not oval), and then tore newspaper sheets into strips. I made a solution of glue and water (like for papier-mâché) in the kitchen sink and dipped the newspaper strips in one at a time, and when they were dripping wet, laid it over the balloon. I did this over and over, criss-crossing the strips so it was about three strips thick and completely covered. I let it dry for two days, and then popped the balloon and cut a little hole in the side for a door where I inserted the pre-wrapped goodie bags (not loose candy): inside their goodie bags were bouncy soccer balls, plastic water bottles (which they really liked), soccer stickers, and foil-wrapped chocolate soccer balls. I taped the door shut with masking tape, then spray painted the whole thing white. The kids used their black markers to make it look like a soccer ball. The piñata was attempted to be hacked open with a plastic/foam bat (don’t use a real one), but the smaller kids were at a disadvantage, and since it was a soccer party, they were allowed to kick it. Another piñata rule for safety is that everyone but the kid who’s up has to stay outside the line marked on the ground.

As I mentioned, this was only part of their party favors, and at the end of the party when the parents were arriving, we were giving out the rest: I had medals for every kid (I found both inexpensive metal ones online as well as cheap plastic versions to choose from), and the parents who helped at the party presented each medal to each kid and said something positive that they noticed about each kid during the party while we snapped a picture (this picture was included in the thank you notes that were mailed the week after). As they stepped down, another parent gave them their soccer cookie decorated from before. I was so happy I didn’t forget the two things I normally do: matches and a camera. My boys were glowing with happiness for the rest of the day and didn’t even notice that we forgot to open the gifts during the party until the next day. I hope you enjoy this party as much as I did! 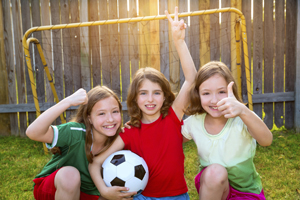