My daughter turned five and wanted to have a Spa Party.  Research: So I began researching and this is what my husband and I came up with.  Prior to the party we went to Libby Lu's (we live in Colorado and Libby Lu has not made it here yet!) on a family trip to Ohio. We bought a couple of items but mostly I went to LEARN! I watched the "Libby Lu Crew" perform hair dues and makeup for about 2 hours. I learned how they do all the outrageous hair dues that little girls love, watched them put glitter, glitter and more glitter on the girls faces, hair and nails. We made a couple of our own Libby Lu creations to use at our party back at home in Colorado (lip gloss & fairy dust). We also bought their Invitations and Thank You cards to make things easier.

Prior to Party Day (We limited the number of girls who could attend the party to 7 including my two daughters-my daughter was allowed to invite 5 friends the age she was turning!) We sent out the invitations and on them I wrote in detail the plans for the party. I explained that we were having a SPA Party and the girls are to come dress in Bath Robe with shorts and a T-shirt underneath. I also said that we would be fixing hair, nails and makeup as well as having facials and shoulder massages. Since all the girls would be dressed up and ready to go somewhere after the party ended we thought it would be fun to have the Dads pick the daughters up and join my husband and daughter on a Father-Daughter date to Mimi's café'.

So on the invitations I explained about the Father Daughter date and said if girls were planning on going on the date please have their Fathers pick up their daughters at 4:45 instead of at 4:30 ( I put 4:30 on the invitation incase a child's father or special male figure couldn't attend) and wrote on the invitation for them to bring extra clothes for the date! To my surprise all Dad's agreed to go! And were so excited that they got to be apart and had an open opportunity to spend quality time with their daughters. Most Dad's commented about how they had been wanting to take their daughters out on a date but hadn't been able to plan it.

Party Day I decorated the majority of the house the night before and had recruited several extra helpers for the day 7 (including my husband and 2 Mom's who came to the party with their daughters). We transformed a loft into the SPA Room and had three separate areas: one for pedicures 2 small child chairs, foot tubs for the girls to soak their feet, highlights magazine next to the chairs for the girls to read while they were getting their toes done and all kinds of nail polish, lotion, and jewels to put on their toes and quick dry to put on their toes once they were painted. We had two people working this area.

The next area was the facial/massage area. We used a fold out futon and hung a mosquito net over the bed and used our theme colors pink, burgundy purple to decorate the bed. When the girls came to this rotation they would get a headband to pull their hair back before they got their faces washed. They then put on a black clay mask from Origins and cucumbers would be placed on their eyes. I then would come around with the camera and take their pictures with their masks on and cucumbers on their eyes. While their masks were drying they would get shoulder massages. All of the girls loved this rotation and commented on how relaxing it was and how it felt so good! We had one person working this area.

Our last area was for manicures. We had a small child table set up with two chairs that was next to the pedicure area so the two rotations could share supplies. At this area we had four hand soakers (the things used to soak your nails in when you getting a manicure at a salon), had all kinds of nail polish, lotion and jewels to put on their fingers and quick dry to put on once their nails were painted.  We had two people working this area.  We had signs around the house saying SPA this wayà a sign on the door that read Rielyn's B- Day Spa, lots of candles, ocean/waves music playing, decorated with white Christmas lights, brought up greenery and artificial trees that had white Christmas lights around it, etc. I used any and everything from my own personal decorations to make the room look like a spa.

Girls Arrival: The girls arrived at 1:30 and we immediately began working on a craft and eating spa food (strawberries, oranges, grapes, cantaloupe, cheese and crackers and virgin strawberry daiquiri's). The first craft they worked on was decorating flip-flops (foam flip-flops used at a spa when you get a pedicure. We got them for free at a local nail salon) with jewels I purchased at Hobby Lobby. They all decorated the top part of the shoe and we used tacky glue to hold down the jewels. Once they finished their first craft they had another one.  The girls made their own body glitter (aloe vera mixed with pixie dust (a type of glitter) and put them in small containers. We had stickers to put on the containers along with stickers with their names on them.

After all the girls arrived and finished their crafts we played put lipstick and eye shadow on my Dad and Uncle.  My husband and his brother got pink and purple wigs and put them on and became Javier and Sebastian (names they made up) we blindfolded the girls and let them basically play pin the tail on the donkey with lipstick and eye shadow. The girls loved it! They all laughed so hard and my husband and brother in law were great sports and made it super fun for the girls! Each girl got a bracelet for playing! We then opened presents and ate cake (I made cupcakes for cake since the girls would be going out to dinner with their Dad's in a few hours). My husband and Brother in Law cleaned up and were ready for the Spa to begin.

Once presents were opened and cake was ate all the girls we excited for the Spa to begin. We took each of the girls and gave them small gift bags to put their own hair bo's, bracelets, etc in so they wouldn't loose them.  Names were already put on each bag so we would know who's stuff was who's.  We also took before pictures of the girls before they went to the spa.  All the workers came downstairs and introduced who they were and called out the names of the girls they would be working with during the first rotation. Javier and Sebastian (my husband and brother in law) became escorts and waiters. They took the girls up to their stations and it began!!

We would rotate stations and girls every 20-25 minutes. We made sure all the girls got to be with the Birthday girl during one of the rotations. During the rotations Sebastian and Javier brought up lemon water in tea cups and would ask the girls if they needed anything. Once all the rotations were finished the girls then all came together and decided to change their clothes and get into the ôdate attireö. We had a separate bathroom and 3 other bedrooms girls could change in one at a time.  After they were all ready we all came together and sat in a circle and all 7 workers put makeup on their one girl.  We used glitter, lip-gloss, eye shadow and blush and didn't do anything in excess. The girls loved it. We then divided the girls up and 4 workers did hair.

For hair I had purchased: hair extension/hair pieces for every girl at the dollar store. The hair matched their natural hair color, pink & purple hair bo's, ties, and ribbons, glitter hairspray, bobby pins and extra combs and water bottles.  We fixed each of the girl's hair and they loved it! Shortly before the girls we ready the Dad's started arriving. I had bought a bouquet of flowers to use as decorations for the spa.  I allowed each Dad to make his daughter her own bouquet from the bouquet I had already purchased. Upstairs we did last minute primping and gave the girls their goodie bags with were red purses filled with beauty supplies. The girls were ready and excited to not only see their Dad but to get to eat dinner all together.

With cameras ready we announced each girl and she came down the stair case to meet her Dad who met her and gave her her own special flower bouquet and told her how pretty she looked.  There were several oh's and ah's over each girl and they all came down gleaming! We then took ôafterö pictures with their Dad's prior to leaving for the date! Goodie Bagsà We started working on this party early. Which allowed us to buy great items for the goodie bag and party for really cheap! We hit lots of sales including 75% off at Bath in Body and 90% at Joanne Fabric. In each girls goodie bag was: Chocolate lotion from Bath in Body, Cinnamon lip gloss Bath in Body, hand held mirror, Shimmer powder puff, all kinds of little fun things.

Resources: Libby Lu, Sally's beauty supply, Hobby Lobby, Joanne's Fabric, Bath in Body, Walmart, and Claires! After thoughtsàThe party was so much fun, I had several comments from friends who said their daughters had so much fun and they would love to do a party like this for the Mom's!!! Clean up was pretty minimal. The day and night before the party was a lot of work but totally worth it for the girls! We sent the girls thank you cards and included pictures from the day (their before and after pictures and pictures of them with the clay mask and cucumbers on their eyes) I also included a saying for the Dad's it read:   "I am preparing her to be a bride, but I am not the groom.  I am preparing her to be a mother, but I am neither the husband nor the child.  I am preparing her to be a godly woman, but I am not a woman. How am I preparing her?  By being her Dad, a man of integrity and love in her life.  I am trying to be the man against whom she can evaluate the character of other men to come. Author Unknown   We hope you all have as much fun as we did having a Spa Party at your house! 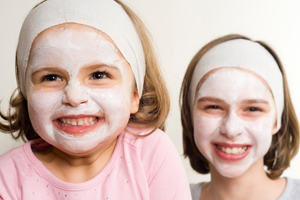