Invites: We didn't use a formal invitation for this party. We just sent invitations via facebook with a picture of our daughter dressed in her Jessie costume.

Decorations:   If we would have purchased a big party pack of supplies for this party we could have easily spent a few hundred dollars. Instead, we hit the fabric stores, the Dollar Store, 99cent store, Walmart, and of course, Target. We did a lot of printables to help with the theme and basically just did everything ourselves. The only commerical Toy Story products we purchased were a few of the party favors and a tablecloth. We already had tons of Toy Story figures for decoration.

We asked the kids to dress up, and a few did. Of course, Emme wore her Jessie costume. Her dad and I wore matching Alien shirts from Target. Our main idea was to have 3 different themed areas.

For the gift table, we bought the blue and yellow fabric to make the background and banner. We printed off letters for her name and the clouds. We hung the banner from a rod and string. I just had to sew a long tube for the rod to fit in. The banner was glued to yarn. The cowboy banner was made with bandana print fabrics from fabric store. Again, I glued it to yarn.  A close up of our Pizza Planet station where we put our pizzas. Erik made a rocket out of craft foam from Walmart. He printed out a picture of Woody, the Aliens, Buzz, and the Claw to make it look like a scene from Pizza Planet.

I found a font similar to the one used for Toy Story products and printed Emme's name. We printed a 3 from the Toy Story 3 ads. We also glued glow in the dark stars to the board. The board was a pre-colored science project board from Walmart. We added some green star balloons from the 99cent store, a Toy Story Alien tablecloth from Walmart and some green polka dot napkins and star napkin holder I already had.or the gift bags, I covered a small standing shelf I had in my kitchen with leftover cow print fabric from Emme's costume.

We strung up Army men on yarn on this table and the Pizza Planet table. They looked like they were sliding into combat.  We also had extra seating for the little ones down in the family room. We added a few printable Toy Story drawings to make it tie in with everything. As you can see, we used 99cent store star balloons in different colors to make everything feel more festive. The stars added the extra fun element as opposed to regular round balloons.

Snacks: For our Toy Story party menu we served pizza, chicken wings, potato wedges, salad, fruit, cake, and cookies. While I was researching for the party, Emme got sight of the Jessie Hat cookies and just HAD to have them. So, I had to make them. The came out pretty good. The kids gobbled them up.

Activities: Next, are our Toy Story party games. I searched and searched for some good ideas and found something similar but we made our own variations. We knew they had to be easy enough for at least a 3 yr old to do. They all worked out perfectly.

Our first game was Toss the Snake in the Boot". I bought a laundry basket (could have used one we already had but let's face it I could use a few more laundry baskets) from the 99cent store and a few rubber snakes from Walmart. Erik drew and cut out a boot from foam bought at Walmart also. We let the little kids stand closer but everyone basically had 3 tries to get as many snakes as they could into the basket. If there were ties we would have gone into tiebreaker mode but one of my little cousins made all 3. It was fun to see the children and their skills or lack thereof. They all had fun trying though!

The next game was "Shoot Zurg" which was basically a dart game variation. Instead of darts we used a cheap Nerf dart gun that was small enough for the little ones to hold. Erik had to help a few kids but they all had a fair shot at getting the best score out of 4 darts. We printed out a picture of Zurg and taped it to the back of a cheap target set we got at Walmart. My 3 year old nephew won that game. The prizes were simple Target dollar bin prizes. One was a paddle ball set and the other was Silly Putty. They both went nicely with our Toy Story theme.

Favors: Just so there were no sore losers we had little gift bags for the kids to take home. We decided against candy because Halloween was only last week. The bags included Toy Story stickers from 99cent store slinkys from the Target dollar bin a few Army men from the Dollar Store (one pack of 60 cost a dollar!) and a few random toys from a Toy Story favor pack from Target. These included a Toy Story maze page kaleidoscope plastic alien slinky Woody sticker and I'm sure there is something else I am forgetting. I put them in simple brown lunch bags from Walmart and threw on a few extra Toy Story stickers and that's it. I could have taken more time to add detail but I had no more time and the bags were just trashed anyway! I lined the bags up for display but out of reach on one of the tables and they fit in nicely.

Cake: For the cake we bought a white sheet cake from Walmart. It came with some flowers on it but my aunt helped me scrape them off. We then added our own decorations and had a really awesome cake. Couldn't have asked for better especially considering the money we saved on having a custom cake made that might be half as cool as this. 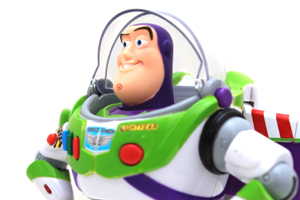