Rachel in Astoria, OR USA

Veggie Tales birthday-  I did this idea for Josiah’s 2nd Birthday. Josiah loves the Veggie Tales, and we had planed to purchase the newest Veggie Tales movies, so this was a perfect theme.

Invites- I purchased official veggietales invites, but you can create your own, or print off one online, and have Peas come and Lettuce Celebrate Josiah’s 2nd Birthday Turnip at 1:00pm. .. Etc.

Cake bought a cheap one layer circle cake and decorated it with cutouts from an extra invitation.  Other ideas- Make green cupcakes (decorate as peas), do a Bob the Tomato cake out of a ball pan, or even a circle pan, purchase official veggie cake decorations and add to a homemade or store bought sheet cake. Recreate Mr. Luntz cake for Little Joe (with a frosting cow), Recreate cake from Josh and the Big wall

Food- Pizza and Root beer (two veggie tales favorites), could extend this, and have it delivered, with a  lion on the front of the box.  We also had a veggie tray with carrots, broccoli and celery (one could use any veggies they would like), I washed and cut the veggies and placed them in a planter box lined with tinfoil, decorated with cutouts from another extra invitation. I had my neighbor make spinach cream cheese dip, and my father brought ranch dip.  These I put into small pyrex custard bowls, and inserted into two small planters which I had decorated with Jr. and Mr. Lunt (I printed them off from an online site). Other food ideas are Cherry Slushies (from Little Joe, and Josh and the Big Wall), Popcorn balls (from Are you my Neighboor), Popcorn or Peanuts (from Little Joe), Jello (from Are you my neighboor, and Snoodle’s Tale, Josh and the Big Wall), Pancakes and noodles (from a Snoodles Tale), Sauces (Madam Blueberry), Cheese Curls (Jonah, Little Joe), Steak and Scampi (Jonah), Apple Pie (Madam Blueberry), Honey (Josh and the Big wall),

Decorations- I purchased a package of wall decorations on ebay, this would not be necessary if one had time and talent to make them from construction paper, I just didn’t have the time.  I made a kitchen counter with flour sugar and tea containers to take pictures at, with a window above it so those unfamiliar with Veggie Tales would know it was a kitchen.  Also I reused a sign I made for hubby’s birthday that said Happy Birthday and just added a Pea.  Josiah had colored some coloring pages I had printed off so I cut those out and glued them on construction paper and taped them up, also various pictures from online, I used our color printer till it ran out of ink.  I used our coffee table at the entry way for gifts, and did not decorate it, but could have.  I bought some mixed balloons and blew up the green, red, yellow and orange.  This was the cheapest way, one could get them with helium, and mylar Veggie Tales balloons are available online.

The Table- I was going to use a green sheet but it was on Josiah’s bed at the time.  So I just used a white sheet, for placemats I printed off the pic of all the veggies from Bigidea.com and glued it to construction paper, I placed green cups on the table with markers and crayons.  For the centerpiece, I bought a cucumber and tomato and decorated them as Bob and Larry, also added three Asparagus, and a bunch of grapes I put all this into a flower pot lined with tin foil and placed a bag of baby carrots in the bottom to raise it up.  This was then given as a prize in the How many peas in the pot game.

Placesettings- I used my sideboard and had red plates, and green cups (when stacked reminded me of Larry), with green napkins.  One could purchase official party stuff for this, but I decided there was enough veggies around, I didn’t want it overwhelming.

Party Favors- The Centerpiece of Veggies, and for the kiddos I made coloring books by printing off sheets from BigIdea.com and binding them with my binder, One could hook them together other ways if one doesn’t have a binder.  Also make a cover that said (guest’s name)’s Coloring Book then a picture I found online of the peas all in birthday gear, and then From Josiah’s 2nd Birthday June 3rd 2004.  I bought some twistable crayons from the store and put this along with some mini pots and some seeds into a bag I made out of two pieces of printer paper, on which I had printed veggie characters.  There are lots of official Veggie Items one could fill a bag with, or use veggie themes such as gardening and put gloves a small watering can, or a potted plant.  Other themes could revolve around Cowboys (Little Joe), Space (Are you my neighbor), Fish or Pirates (Jonah) etc.  Also for bags one could use dimestore green, yellow, red or orange bags- decorated or not, or put all the party favors in pots. For older children you could make or purchase Veggie Masks, my babies couldn’t wear them without tearing them off, so my 6 yr old niece and I took our pictures in them as we sat in the play kitchen. Have a Polaroid Camera on hand so the kids can keep their pics.  Have all the kids in veggie masks and take a group picture. Another idea do with a digital and send the pics with the Thank you notes. You can also purchase official masks online, I made mine out of construction paper.  If you make your own to make them sturdier you could laminate with clear contact paper or glue to cardboard.

Games- Since I had only a couple children I just had one game for the kids and, we watched a new veggie video.  The plan was to watch it while the pizza was cooking, but Josiah wanted to open his gifts.  So we watched it later.  How many Peas in the Pot This is an adult game, or at least for older children, since Josiah couldn’t play it was a good game to use for the centerpiece as a prize. I used a mini pot and put peas in it, I cut out and decorated Larry’s out of white printer paper, with various faces, one could do this with peas and green paper, or other ideas.  On the back put Name and a line and Guess and a Line. We played this as people were finishing up their pizza, and they were to guess how many peas were in the pot. This was a good game.

Oh where is my Hairbrush - This game I played the silly song, and then my 6 year old niece and Josiah went on a hairbrush hunt, I had hidden a hairbrush in a flowerpot decorated with Laura Carrot and Ms. Blueberry, one could use Peach instead.  Upon finding the pot I had placed a note Bring to Rachel for a prize When they brought it to me they got their party favor bags.  One could have kid sized hairbrushes for all the kids instead.

Other games- There are so many other games, like pin the eyes on Bob, or pin the plungers on Larryboy, to races with veggies, or veggie painting, just use your imagination, also if you have the veggie books or music That would be good to use also, have a reading time (one of the parents could read to the kids during the cooking of the pizza). And the Music could be used in Musical Veggies, Just cut out veggies and tape to the floor can do like a cake walk, or like musical chairs.  Or use in hot Veggie, or numerous other games.

Go Fish - one could make Go Fish cards, purchase the official cards, or use a standard deck, adults might enjoy doing this as the kids watch a video. Guess the Veggie have a blindfolded taste test and guess which veggie you are tasting.  Other ideas- Bowling party, fish theme (Jonah),  Come dressed as your favorite Veggie Character. 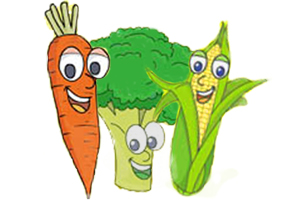