We had just done a Wiggles Party for our 3 year old son.  Most of the children were a lot older though.  It was really hard to find good recent ideas since the Wiggles have been around so long.  Character parties are really challenging for me since I make most everything by hand, so for this party I broke down and got the Wiggles invitations, cups, plates, loot bags, stickers, and tablecloths, so that my son could see thier faces on something.

On the invitations I asked everyone to come dressed as their favorite Wiggle.  I took a group picture of all of the adults and kids and sent one with a thank you card.

For the decorations I made a lifesize Captian Feathersword, Dorothy, Wags, and a Wiggles sign out of cardboard.  I cut them out with a sheatrock knife and painted them with craft paint from Walmart and stood them up in the party area.  I also cut out over 40 music notes out of black poster board and hung them from the ceilings, walls, cupboards, lights,and anywhere else we could find a spot.  I also bought a balloon tank from walmart and yellow, red, blue and purple balloons and got about 30 balloons out of the tank.  All of the extra balloons were blown up and thrown all over the floor(about 30 more.

We played wiggle dvd on the big screen T.V. and used the C.D. for the games.  I made all of the adults team up with a child for the games, which made this tons of fun.  For the games we played Hot potatoe with the song.  We also did a cold Spagetti relay.  I boiled lots of spagetti and had one person throw the spagetti while the other person had to catch it and run it over to a pot.  This was timed and the person with the most spagetti in their pot was the winner.  This was messy and fun too! (I did lay tarps down for this one)

I also did a Wags dog bone toss.  I made a dog house out of a cardboard box and painted it.  I Cut out four holes and had the kids and adults throw real dog biscuits to see who could make the most shots(my dog was thrilled since he got to eat them afterwards). I also did a game called Captain Featherswords hook relay which I took candy canes and poked them through big plastic cups for hooks.  They had to stick thier hands inside and Hook as many pretzels as they could, and run to the other end of the room and drop them in the basket. I gave them 30 seconds. The adults liked this more than the kids did I think.

We also did a Dorothy the Dinosaur Stomp game.  For this game we took the balloons on the floor and had everyone attach one to each ankle.  The rule was to stomp out everyone elses balloons, the last person left was the winner.  To make it fair, I told the adults that they couldn't stomp out the kids balloons, but the kids could do theirs.  Having each child teamed with an adult was a lot of fun and made it really fair since the age group ranged from 1 to 13 years old.

After games we served a meal which consisted of Dorothys rose Punch(hawiian punch, pinapple juice, and gingerale with fake roses taped all over the bowl)  Captain featherswords Cannonballs ( Sweet and Sour meatballs), Henrys Octopus Dogs ( hot dogs split in 8 slices at the ends and then boiled so they looked like an Octopus), Anthonys Fruit Salad, Gregs Magic Macaroni (macaroni salad), Murrays rocking chips and dip, and Jeffs sleepy sandwiches( Finger rolls), and then I made the cake with a cake kit from our local grocery store and decorated it with colored music notes and the big red car with the wiggles in it(part of the kit).

I sent the kids home with Harmonicas and whistles(from the dollar store), wiggles stickers, Red, blue,yellow, or purple bubbles, lollipops, wiggles fruit snacks, and tons of great memories.  They party was such a hit that it started at 3:00 and the last guest left at 8:30.  The adults could not stop commmenting me on what a creative party it was and how much fun the kids had.  For the first half hour of the party my son danced and threw balloons and played his wiggle guitar with all the kids.  Just the smile on his face made it worth all the work. 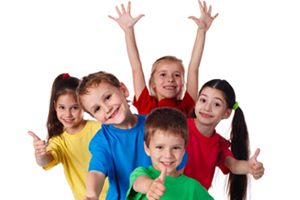