Every year for my son's birthday we pick a different continent as the theme. This year for his 5th, we did Antarctica.

INVITATIONS: I found a website online (http://classroomantarctica.aad.gov.au/textversion/Materials_txt/midwinter.html) that showed a really clever invitation for Mawson Station's Mid-Winter Celebration and used much of the text as a letter written from my son to celebrate his birthday along with Mid-Winter's Day as the invitation. I printed it on snowflake letterhead, and mailed the invitations with polar explorer stamps from the 1980's (ebay.com). There are 22 cent Arctic Explorer Stamps from 1986 and 25 cent Antarctic Explorer Stamps from 1988. I sealed them with silver snowflake stickers (orientaltrading.com).

FOOD & DRINK: This was the hardest to do because I normally find and prepare authentic recipes, but I knew the guests would not want pemmican, sledging biscuits, and seal flipper pie. So, after much thinking, I decided I would have an all white foods menu served on clear glass plates. I found a great recipe for Snow Punch (allrecipes.com) and another for Glacier Punch in a November 1997 Better Homes and Gardens Magazine (bhg.com). Appetizers were deviled eggs made with cream cheese, crab dip & crackers, cauliflower, jicima, and peeled cucumber slices with ranch dressing, and mozzarella string cheese sticks.

The main dishes were seafood sandwiches made with imitation lobster, turkey and chicken rolled up lunch meats, quesadillas made with monterey jack cheese and cut with a snowman cookie cutter, and a cheese pizza from Papa Murphy's with creamy garlic sauce instead of marinara. As side dishes we served potato salad (no mustard in recipe), clam chowder, white cheddar macaroni & cheese, and Japanese rice balls with smoked salmon inside.

We also had a variety of sweets which were the easiest to find white recipes for: snowflake sugar cookies, Hostess Sno-Balls, Eskimo cookies (allrecipes.com), mini powdered donuts, yogurt covered raisins & pretzels, and popcorn balls. We wanted to make an igloo cake, but felt we would not have time so we ordered a cake from Raley's and had them put picture of a glacier on it. It came out really nicely!

DECORATIONS:  We knew the theme would be Antarctica for over a year so after Christmas, we scoured all the stores for any snowflake, snowman, icicle, or other appropriate decorations when they were 75%-90% off. We found great bath and kitchen towels, a light up fiber optic toilet seat cover, tablecloths, snowflakes, poppers/crackers, window clings, spray snow, igloos, a polar bear cookie jar and snowman drink dispenser. We cut out paper snowflakes from white and light blue paper and hung them from the ceilings. We draped all the chairs and sofa with white tablecloths and sheets. The entire inside was a winter wonderland. We decorated the trees outside with white balloons and bought a snow making machine (ebay.com) that sprayed foam snow all over the yard. The kids loved that!

We had a child sized dome tent in the front yard set up with gear and a survival kit. Nearby sat a small blow up swimming pool with a blow up killer whale inside as well as a fishing pole and plastic fish with magnets on them so you could catch them with the pole (KB Toys Outlet). We found a baseball pinata at a party store and took the red stripes off so that it looked like a snowball. We filled it with candy and they got to beat the pinata out under the "snow".

MUSIC: I did a search online in our library's catalog and placed on hold any cd's that had an ice, snow, cold, Eskimo, polar bear, penguin, whale, or Antarctica song. Then I made a tape of all the songs: Ice Ice Baby by Vanilla Ice, Quinn the Eskimo by Manfred Mann, Let It Snow, Baby It's Cold Outside, Yeti Stomp by the Backyardigans, and many more. I actually found enough themed music for 2 hours!

GOODY BOXES: I purchased snowflake goody boxes from Oriental Trading Co. They were hard to put together, but very pretty. I filled them with snowflake items also bought mostly at OTC: kazoos, punch balloon balls, rocket flyers, light up bouncing balls, polar sticker scenes, snowman candy & gum, snowflake cookies, and Ice Age coloring books from the Dollar Store. I found really cute light blue Chinese take out boxes with snowflakes on them and a snow ball handle that we gave out for the children to collect their pinata candy in. We found those at a Marcel Schurman (Papyrus) outlet store after Christmas.

ACTIVITIES: The children played a Pin the Goggles on the Polar Bear game (OTC), made a snowflake rubbing (OTC), made fake snow (Snow FX from Target -- this one is really cool for people who live in warm climates), got candy from the pinata, and then took a journey to Superman's Fortress of Solitude. My husband set up a walk-in closet sized area which was draped in white, had a standee of Superman, a light up Kryptonite meteor under glass, a Bottle City of Kandor prop, and we scattered small green glass bottles filled with green rock candy around so the kids could each take home a bit of Kryptonite. As another activity, we had each child sit on a white balloon. When it popped there was a paper inside that told them if they won a prize.

PRIZES: We had 3 stuffed snowmen, 3 stuffed polar bears, 2 stuffed penguins, and blocks of 4 polar explorers stamps to give out in the balloons. The person who won the Pin the Goggles game got a goody bag from OTC fileld with snowflake items.

THANK YOU'S: Cards found at the Marcel Schurman Paper Outlet of a snow globe (you run through the printer with the text you want inside the globe portion).   Everyone seemed to have a great time. Most of the children started crying when their parents told them it was time to leave! I hope this gives anyone doing a Winter, Christmas, Superman, or Polar party some good ideas. I know we blurred the lines between the South and North poles because the North has more life (polar bears, Inuit culture, Superman etc). We just wanted to have fun and not be completely factual. :) 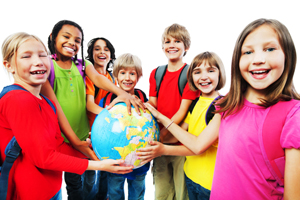