When I was looking for ideas for throwing a BACKYARDIGANS party, I couldn't find much help. As such, I wanted to share my ideas for those out there that aren't wanting to wait for Nickelodeon to come out with the supplies. I threw a Backyardigans party in March. It was attended by about 17 kids between the ages of 18 months and 14! The birthday boy was turning 2 most of the guests were friends and family that have kids in all those different age groups. It made it challenging as not a lot of the kids had any idea of what the Backyardigans were!

My first idea was that my invitations had to introduce the show/characters. What I used for invites that everyone loved were the promo CD's I found on e-bay. The CD's come in a cardboard sleeve that opens like a book and I put the party information in place of the premiere date info. It was also nice because so many of the partygoers had not been exposed to the Backyardigans yet and were very surprised at how much they liked it!   One of my early challenges was where to have the party. Our house was fine for that many people when the kids were smaller, but now that most of them are at least 7, it was time to look for somewhere else. I was able to rent a community center at the park for a very small fee for 3 hours. This was perfect. If it rained, we would stay indoors, but if it was nicer, the older kids could go play if they lost interest in the party (not many did!)

For party supplies, I just did lots of solid colors within the rainbow of the Backyardigans. My husband was not thrilled that his son's party included hot pink, but what can you do! My son's favorite character is Austin and he is LAVENDER!! I used more of a true purple just to appease the hubby. The tables were all covered in green (the grass). I was going to do a bunch of themes - like one table was pirate, one spy, one Yeti and so on but decided against it. Too many guests wouldn't get it so it wasn't worth the effort for me. So I used his Beanie Babies, Tub Toys (that hadn't been in the tub yet) books and the Sing and Dance toys as centerpieces along with different colored bottles of bubbles,balloons and some colorful dot confetti that I found at Party City. The kids were hesitant to take the bubble bottles from the centerpieces to blow bubbles until I said that they could and once they did, things got moving more!

For food, it was all about snacks! I found a list on thebackyardigans.blogspot.com that gave the snacks for every episode! We had apple slices (I found at Costco already sliced and treated so they don't brown), strawberries, pretzels, PB&J, cookies, cheese and crackers, raisins (YETI) and mini granola bars purchased at Halloween.

The cake was my WAHOO - I got a cake from Costco and had them NOT decorate it. Just frosted white with Happy 2nd Birthday Sawyer written in Blue on the bottom portion as you look down on the cake. I then went to Michael's Craft store and got the Wilton green spray and sprayed most of the top of the cake green. My daughter came in handy with her Kelly (small Barbie) toys and we found a slide, a tree and a picnic table. I used the finger puppets from the Nick Jr printables and glued them to craft sticks to set into the cake. Pablo was on the top of the slide, Uniqua from the side of the tree, Tasha and Tyrone were next to the picnic table and Austin, being my son's favorite, was next to the "2" candle. It really looked GREAT!!

For activities, the kids made their own super hero masks and the older kids had to describe what kind of super hero they were. I purchased the blank masks from Oriental Trading along with glitter glue, foam shapes and star stickers. Then I purchased the Backyardigans coloring mat for everyone to color on and the back cover had some pretend activities that the kids really enjoyed acting out. I also printed all of the coloring pages from the Nick Jr. website.

Finally, we played limbo with the soundtrack. (We also had the luck of having a video projector from hubby's work so we had the DVD playing on one wall for most of the party for the little ones enjoyment. It also helped introduce the characters more to the kids who were older and hadn't seen the show. They LOVED it!)

Party favors were a bigger challenge. So I tried to find things from different episodes. Most of it came from Oriental Trading Co. We got bouncing rubber rocks (Quest for the Flying Rock), treasure maps that I chose to NOT cut in half, bandanas (Pirate, Eureka, Polka, Range), pirate patches, magnifying glasses, little boxes of raisins, and a tube of mini M&M's because they are so colorful. Oh, and a bag of Backyardigans fruit snacks!! I put these all in neat bags in different colors that I found on the Oriental Trading site as well. 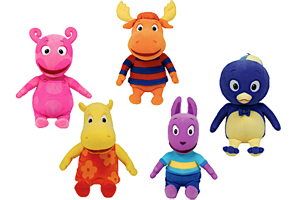