For my sons third birthday we decided to have a Clifford the Big Red Dog theme.  Of course with Clifford, the party’s theme was red red red.  I started planning early so that I would have enough time to get everything I wanted to do done.  The biggest mistake I have made in the past with my kids parties is not having enough time to do everything I wanted and some really great ideas don’t ever get done.  I always make the invitations myself as I love to do those crafty things and quite honestly show off a bit.

Invitations: The invitations were cut from cardstock to look like a white doghouse with a red roof.  A large white rectangle to make the shape of a doghouse and a red triangle to glue to the top to make the roof.  Over that I had found really cute paper at Memories, it was white with black dog prints all over it.  I cut a smaller rectangle to fit over the larger white one and using double stick tape I taped it onto the larger rectangle creating a layered type look.  Finally for the last layer I used a clear velum cut into another slightly smaller rectangle to fit over the paw prints paper so that it was not only seen around the edges but through the velum as well.

Before cutting the red triangles out of the red cardstock for the roof I printed across the center Hi, my name is Matty and this is my Big Red Dog Cliffford, printed on the velum was Wagging Happy Tails and Silly Sloppy Kisses, Clifford’s Barking Out His Special Birthday Wishes, Music Games and Treats You’ll See, Big Boy Matthew’s Turning 3.  Use Birdwell Island as the location and RSVP to T-bone or Cleo.  After all the mechanics of the card were in place I placed stickers of Clifford, T-bone, Cleo and Emily Elizabeth along with other dog type things, bones, bowls and fire hydrants around the edges enough to make them adorable but not so much to cover up the dog paw print paper.  These turned out really cute.

Party Favors: Next I made the party bags for the kids.  I used plain, smaller sized brown lunch bags and actually ran them through my printer one at a time printing Doggie Bag on the front about 2/3’s of the way down then I cut a large dog paw print (1 large circle and 3 smaller ones) out of red cardstock and outlined them in black to make them pop.  I glued these to the front of the bag centered below the Doggie Bag name.  They were so simple and really cute as well.  I filled the doggie bags with a ball, whistle, bubbles, a dog bone shaped cookie I made a few days ahead and covered with red sprinkles, red licorice, and lastly a small cellophane bag filled and labeled as puppy chow (Reese’s peanut butter cereal.)  I actually found some recipe’s online for other types of puppy chow but this cereal really looks like dog chow and it’s a lot easier than mixing and baking and it’s tasty too.  I sat the doggie bags on a small fold out table by the front door so that the kids could grab one on their way out.

Decorations:  For decorations I went crazy with red.  I had red plastic table covers over all the tables and then ran a white plastic table cover like a table runner through the center and then I glued black dog prints I cut out of construction paper onto the white table covers.  I cut a lot of different sized black paw prints and taped them everywhere, on the steps up to the house and all over the backyard where the party was, the ground and walls.  I rented a helium tank and blew up 40 red balloons, tied them with this great dog paw curling ribbon I found at a local ribbon store and placed them everywhere.

Cake:  The cake turned out absolutely adorable.  I was very lucky to find a large, 10 Clifford on ebay but even luckier when I found 2 sized Emily Elizabeth, T-Bone and Cleo as well.  The sizes were perfect as Clifford is so much bigger than the others just like in the cartoon.  I bought a half sheet cake at Sams club and had them decorate it very simply, white icing sides with red piping and the top of the cake green with grass type frosting.  In the bottom right corner it read Happy Birthday Matty.  I’ve found that it’s easier to buy a cake than to make one.

After I picked up the cake I decorated the top myself.  I cut pieces of cardboard and taped them together to make the shape of a large dog house, it stood about 14" tall and 16" long.  I bought already made frosting from a local cake supply store (canned frosting isn’t stiff enough) and I frosted the cardboard doghouse white and then sprinkled red candy sprinkles all over the roof so that it would match my invitation and I used a black gel writer and wrote Clifford across the top of the doghouse over the door.  I placed my 10 Clifford at the top left corner section of my cake and then sat the doghouse over him so that his head and front paws were outside of the doghouse (half in half out).  The back of the doghouse hung off of the cake.  I then placed the smaller Emily Elizabeth to the left in front of the doghouse and T-bone and Cleo towards the right top side of the cake.  It was absolutely adorable and the easiest cake I’ve decorated so far with my kids, everyone loved this it and asked where I had it done.

The Party:  As the children arrived they each got Clifford ears to wear instead of party hats and a painted black nose, (I made these myself rather than pay $4.  Buy plain headbands, I got them 6/$1.00, and cut a strip of red felt to cover and glue then cut two big, floppy red ears and glue them to the sides.)  I did break down and rent a jump house, my kids love them and don’t think a party is a party without one.  I did manage to find a big red dog jumpy house which looked really cute and dressed up the back yard even more.  For activities the kids jumped and played games.  Instead of pin the tail on the donkey I cut a large Clifford out of red poster board and drew his face etc with black marker and we played pin the nose on Clifford, very fun and kept with the theme.

I also made a big doghouse for the kids to play in out of a refrigerator box I got at Lowes.  I also painted it white and I covered the roof with a red plastic table cloth so that it matched the other doghouses.  The doghouse served many purposes, we played musical doghouse where the kids went in a circle in and out of the doghouse, I cut two doors in it, and whoever got caught inside when the music stopped was out.  We played dog songs like Wags the dog and Oh Where has my Little Dog Gone, it was a lot of fun.  We also took all the children’s pictures with their dog-ears on next to the big doghouse and included them in the thank you notes.

For food what else would you have at a dog party, hot dogs and I cut up watermelon to go along with the all red theme.  To encourage the kids to watch my son open his gifts and to help settle them down I printed Clifford coloring pages and passed out red crayons to everyone just before opening gifts.  All in all it was a great party, I am so glad we went with the Clifford theme.  I got a bit discouraged at first as Clifford party supplies are hard to find but it was really worth all the effort. 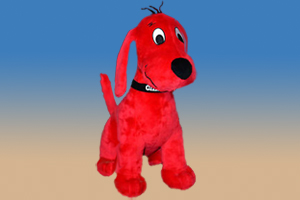