When my husband informed me that he HAD to wake our daughter, Kharma, up from her nap so that she could watch the Curious George movie that was on tv I thought, okay, if she loves it THAT much then that's her birthday party theme!

INVITATIONS**  With my husbands help we found a picture of Curious George decorating a birthday cake he somehow put her name on the cake.  Then it said something like Someone's turning 2!  Can you guess who?  Kharma!  And then info at the bottom.  These turned out really well!

DECORATIONS** We went with a red, yellow, blue theme.  Red, blue, yellow plates, cups, napkins.  We strung crepe paper 4 ways out from our dining room fan.  Also across our back porch and into our trees.  I went and got 5 bunches of balloons, one red, one yellow, one blue, I used bananas as the paper weights(idea from this website).  This turned out very cute!!

My husband drew up Curious George on poster board and painted this with tempura paints.  This looked so good too!(I was using this for a game later on)  In the bathroom, I put monkey ears on the bathroom mirror, with a sign that said Look who's monkeying around!

GAMES** The guest list was about 30 adults, and about 12 kids.  About 8 2-4 year olds and about 5 7-13 year olds so for the games, I kind of needed them to be easy for the younger kids and only one of the older kids made it or I would have organized an Ice cube race with them.  I did a reverse pin the tail on the monkey I put 5 tails on the CG poster(enough for the kids we had), and each kid took turns un-pinning a tail.  The one with the sticker on the back won a Curious George book.

I then bought 2 monkey in a barrel games, and all the fake bananas at the store(6), and hid all the monkey's and bananas around our yard.  We went on a monkey/banana hunt.  This turned out really well, b/c my daughter was really into easter egg hunting this year so she really thought this was a riot!  We hid the monkeys in our little chinese maple tree, and on the hose, and hung some on our chain link fence and just everywhere all the kids liked this.  I counted them up, and the top two kids that had the highest amount each won the barrel's of monkeys(I just put the monkeys back in the barrels).

I also kind of wanted to have some things that adults could win but I knew they probably wouldn't really be into an organized game. So.  I put a sticker on the bottom of a plate, and the one with the sticker won a loaf of banana bread.  When we were doing presents, the 7th present that my daughter opened, got the other loaf of banana bread.  I also had a jar of those runts candies, and people had to write down a guess of how many BANANAS there were in there.  An adult won that too.

FOOD**  We had the party start at 4:30, so we were having a meal.  We had Monkey Joe's(sloppy joes), Monkey tails(corndogs), chips, pretzels, animal crackers, Monkey pudding(with pb and pineapple), Monkey Chow(trail mix w/banana chips), Frozen chocolate bananas.  We also had banana punch(this is WAY better than it sounds) the recipe I had used had mashed bananas, orange juice concentrate, lemonade concentrate, pineapple juice, sugar, water.  You freeze that part, then mix it with 7-up(I used diet), to make a slushy punch.  This was really really good!

I also offered apple juice for the little kids, iced tea, and coffee.  I had a LOT of compliments from people on the food.  It was funny too, b/c I had a LOT of adults comment on how long it's been since they've eaten a corndog!!

CAKE**  I actually did the cake myself!  With help from my marvelous mom!  I did a round cake, stacked two of them on top of each other.  The whole cake was frosted white first.  Then, I drew the outline of Curious George's face, and frosted that with a really nice tinted frostning, it was perfect!  Like a light tan, peach, color.  Then I used a small star tip and did his face/head brown using that, and that looked really good, like fur!  I just outlined it and drew on his eyes, ears, nose, mouth, etc. using a tip that was a small circle used for outlining.  (you can tell I don't know much about this!!).

My mother then wrote Happy Birthday, Kharma around the bottom.  We also did 2 dozen cupcakes, frosted them green and blue and did yellow hats on them.  These turned out really cute too!  I had chocolate, vanilla, and strawberry swirl ice cream I also had stuff to make banana splits but I think people got really full so this didn't go down as well.

TREAT BAGS** Okay, these turned out REALLY well!  I somehow found a pattern on the internet of making a monkey puppet using brown paper sacks.  So I printed these off and colored the face, ears, hair, and tail.  Then I cut them out.  I folded down the paper sack, one fold, and glued the face on the fold, then glued the hair to the top in the back of the fold, glued the ears in the creases at the sides, and the tail to the back.  These really turned out so cute!

I filled these with banana pudding cups, a banana sucker(orientaltrading.com), a key chain size monkey in a barrel game(OT.com), a Curious George puzzle(again, Orientaltrading.com), a fruit snack, and Curious George stickers.  These were really really cool b/c I didn't want to just fill them with candy!  OVERALL, I would say EVERYONE had a really really great time!  I had a lot of compliments.  My husband thought I did a terrific job.

I just must say I LOVE LOVE LOVE this website!  I got a TON of ideas from here, and can't WAIT to do next years!!!!!!! 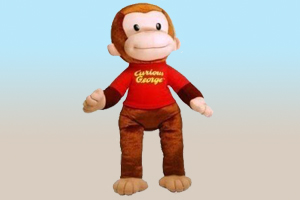