Jo-Jo's Circus 4th Birthday We ordered the basic JoJo's circus invitations from www.birthdayexpress.com   I set the time from 1-3 pm, so I wouldn't need to serve lunch.

In the past I have found that if you do a lunch time party for small children, you end up spending half the party trying to feed children that just want to play.  I put out chips, veggies and dip for the adults, and lemonade, juice and bottled water in a cooler outside.  For the kids there were bowls of pink popcorn I made (recipe from the jello website). I didn't put out any peanuts because of the allergy danger.  I put on a JoJo's circus CD outside for the kids to listen to while they played.

Previous to the party, I glued JoJo's circus coloring pages onto little paper tote bags.  I got the printouts from the Disney channel website, and cut them down to fit the bags.  I set them out on kiddy tables.  I put individual ziplock bags with stickers, puff balls, feathers and a glue stick next to each bag, and a cup of markers for each little table.  When the kids arrived, they colored them and glued stuff onto them as they waited for the other kids to arrive.   I borrowed the extra tables and chairs needed, but had to buy a few extra little chairs at the $.99 store.  On the tables I also placed hats and clown noses.  I had hot glued red puff balls onto the ends of the party hats to look like clowns, the clown noses were bought off of ebay.

After the children were done making their bags, they went into the yard to play.  Since the children were all four, I set up a few play stations in the backyard, to suit their attention spans.  There was a beanbag toss game, which was just a hula hoop and three beanbags (I made them myself with polka dot fabric and pinto beans, very easy and took only about 15 minutes to sew on my machine).  They took turns tossing the beanbags into the hula hoop, trying to scoot back further each time if they wanted to.  I also set up a little pool with water toys in it so they could put their hands in it and splash around a little.  It was a very hot day so we added that in at the last minute.

There was also a little "tightrope" for them to walk (just a 2x4 painted red).  We also set up a big jump house that we bought last year at toys r us, which I highly reccommend if you have kids parties at your home a couple of times a year.  It was about $175 to purchase the jumper, which is about the same price to rent one for a day.  It is smaller than the rentals but you can use it over and over again.

While the kids played outside, I collected all of their bags that they had made and filled them up with bagged cotton candy ($1 store), lollipops, pixie sticks, JoJo's circus bubbles and stickers (www.birthdayexpress.com)

After they played outside for a while, they came in and played with balloons.  There were twisty balloons and regular latex balloons.  I had pre-made twisty balloon shapes.  I got the balloons and pump from the grocery store, and it had instructions inside on how to make different shapes. All I could figure out was how to make hats, swords and flowers, but the children seemed very pleased with that.  I had also planned to paint their faces at this time, but it was just too hot for that so we skipped it.

While the children were inside, my husband set up a pull-string pinata outside (which is the best idea EVER if you are having a party for young children and you don't want to give them a bat to swing around).  The pinata, fillers and pull string kit were from www.birthdayexpress.com   We gave them little popcorn bags to collect their goodies in.  I bought the bags at Party America.

After the pinata, we played pin the tail on the donkey.  I wanted to do pin the nose on the clown but I didn't have time to make it so I just used the donkey one that I already had in my "extra party supplies" box.  The kids did surprisingly well with the game, and I gave them each a bag of animal crackers after they played.  Most of them cheated but all the adults thought it was hilarious because they all put the tail right where it was supposed to go.  I guess I'd recommend using a bandana instead of the cardboard mask that comes with the game if you don't want the kids to cheat.

After the games, we did cake, ice cream and presents.  I had the grocery store bakery make a white cake with lots of balloons on it and a happy birthday message, and I added JoJo figurines on it at home.  I gave each of the kids a circus tent cup that I bought from www.birthdayexpress.com and they had apple juice or water with their cake.

I passed around envelopes for the parents to address to themselves for thank you cards while we were opening presents, and I took a picture of my daughter with each guest before they left, to send out with the thank you notes.  It was such a fun party, and one of the little boys even said "this is the bestest birthday party ever" when he came out of the jump house. 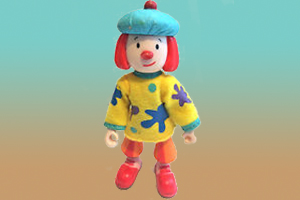