We did a Kim Possible party for my 7 year old daughter.  What will make my party different are some of the extras I included in the party below.

INVITATIONS:  We liked some of the ideas on this website, so I made my own invitation.  The invitation had a picture of KP on the front and said Top Secret:  Confidential;  You have been selected for a very high priority top secret mission.  Do not access this file unless you plan to accept this highly classified adventure.  Inside on the left side I made a decodable message that said Please decipher the code for a very important message  The code said Come join (my daughter's name) for her 7th celebration of Kim Possible birthday party adventure.  The decoder was at the bottom (1=A,2=B, 3=C ...)

On the right side I put What's the Sitch for the Spankin Party!  I then did the who, when, time, where, rsvp, phone.  Under that it said We will be doing crafts, spy training camp, games, dancing, cheering, and watching an episode of Kim Possible.  Dinner and dessert will be provided via El Bueno Nacho.  On the back of the invitation I had the decoder for the secret message inside.  I put a picture of KP's parents on the bottom and said party given by (my daughter's name)'s mom & dad and put our names.  I put the invitation in small manila envelopes and put the kid's names on them along with top secret and confidential on the envelopes.

DECORATIONS:  We had KP posters, banners, streamers, napkins for the main party areas; the kitchen was decorated with Mexican decorations and a sign that said Bueno Nacho.

ACTIVITIES:  When the kids arrived we brought them in for crafts first.  I had them each make their own Kimmunicator.  We used foam squares and glued on white triangle foam pieces for the buttons, a picture of Wade that I found on the internet, and stuck on the kid's initials (as KP has her initials on hers).  Next we made either pom poms or binoculars (as we had both boys and girls) we used toilet paper rolls:  for the pom poms taped in yellow crepe paper to the tube, for the binoculars we taped them together.  The kids decorated the handles/binoculars.  Finally we made a door hanger for any top secret missions they might need privacy in their rooms for.  They decorated them with stickers, glitter glue, and markers and put whatever message they wanted to on it.

GAMES/COSTUMES/FAVORS:  Next it was time to move to the spy training camp.  Each kid was given a spy belt that I had made out of wide ribbon I got from Wal-Mart.  I bought felt and sewed pockets onto the belts.  We had filled them up with a Chinese handcuff, spy glass, compass, watch, notepad and pencil, whistle, glow stick, etc.  Everything a secret agent might need (these were also their favor).  We told them they were to do the obstacle course to train to be a spy.  When going through this obstacle course they needed to save Rufus.  I made everyone a Rufus out of girls pink tights, stuffed with rice and sewn shut.  I drew on eyes, nose, sewed on teeth, and legs.  The kids loved these and they were also a favor!  We built a huge obstacle course with slides, ladders, tunnels, beams to walk across, etc.  When they were done doing this (which they did multiple times) we got a secret message that the presents had been stolen and they had their first official mission.

The first stop was Camp Wannaweep.  Each kid had to crawl their way across the swamp (foam squares in a pit) to fish we had taped up.  One of the fish had a secret message on back to head to Killigan's course.  The kids then hit golf balls at a target( a picture of Killigan), and found that behind the target was a message to go to DNAmy's Cuddle Buddy Factory.  This was on the trampoline.  They had to bounce and pop the balloons.  Inside one of the balloons was a message to go to Monkey's Fist.  They went to the monkey bars and climbed across to find the next message Find Shego's Snare & Dr. Drakken's Den.  We had a room with red crepe paper all over it to represent the laser beams.  On the other side were the presents.  When the kids reached the presents we celebrated by dancing to KP music.  We then opened the presents.  Each child that brought the present gave the present to our daughter and did their own birthday cheer for her.

PARTY SNACKS/CAKE:  It was then time for dinner and dessert.  .  We had a nacho bar so the kids could make their nachos the way they wanted.  We had cupcakes that looked like pom poms for dessert.  While the kids were eating they watched an episode of Kim Possible.  The kids were picked up and took home their spy belts, and rufus.  It was a great time! 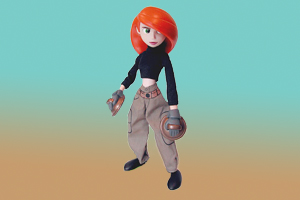