For my 10th Birthday I wanted something sort of elegant and stylish, yet a lot of fun. So, my family and I came up with the idea to do this Limo birthday sleepover.

INVITATIONS: We typed up a fancy invitation in red, black, and pink. The party was from 6-6:30pm to 10am in the morning. We said to dress nicely as they would be watching the school's annual musical. It worked out that the school's musical is always in February around my birthday. In fact, it played the night of my birthday the year of this party. If your school's musical isn't near your birthday, then another idea is to go to a nice restaurant via limo. We slightly hinted a limo would be there, but didn't want to ruin the surprise! (Most of the girls found out by the time of the party)

PREPARATION: The day before the party we bought fresh red/pink roses. We bought the individual plastic water tubes so that they wouldn't wilt overnight. We typed up a menu on the computer of snacks we were going to have in the limo on the way there and back to the host's house. Snacks like cookies, Izze(sparkling water & fruit juice in cans), water, meat, fruit, and/or cheese rool-ups work well. We bought the musical tickets when they first started selling to insure good seating.

We hole-punched both the menu and ticket and tied a ribbon through them and around the roses. We wrote the girls' names on the tickets. If there are any issues between the guests, or one needs to be watched more closely, you can make a seating chart and specifically put a certain ticket with a certain girl. At our local Michael's craft store we found scrapbooking supplies like stickers, construction paper, markers, page protectors(scrapbook sized) and scrapbooking paper as well as photo corners.

We hired a limo company for around 3 hours to drive us to the play and back.Also, make sure your camera is full on memory and batteries! Another idea is to give each girl their own disposable camera and have someone run out to develop the pictures to be ready the next morning(see below).

PARTY NIGHT: Our family always gives the families who've never been to our house before a tour, so that they feel comfortable as to where their kids will be. As girls arrived, we gave them each a rose. We explained to them about the menu, etc. We played some icebreakers to introduce the girls. One was what we call the 'M&M Game'. You can buy a bag of M&M's or Hershey's Kissables and put them in a bowl. Each girl gets a plate and a handful of candy. The host gets to pick a color and however many pieces of candy that color you have, you say that many things about yourself. (Since some had over 15 of the same color, we made a rule that anyone with over 6 pieces the same color said 6 things about themselves!)

Once we were done, they could eat the rest. Then we reused the plates in another game. You turn over the plate and place it on your head. Each girl gets a pencil. The host says a simple item like 'ice cream cone', 'pizza', or 'crayon'(you can say items that match your theme) and everyone tries to draw it the best they can with the plate on their head. It's really funny how it turns out and the girls laughed a lot.

Next, we boarded the limo. We rented a 11 person limo, and there were 12 people total (including my mom), so it was a little tight. Really, it would have been ideal to have a 15 person limo, or so, but we didn't want to raise the prices too high! The girls really enjoyed being in the limo and what's nice is that this works for any season. For many it was their first limo ride. We made sure to take pictures of each girl and also took a group photo outside the limo. The girls also enjoyed seeing the play, especially since it kept them 'in' on the happenings at school!

Once we were home again, we had a pizza dinner and dessert tied into the theme of the play which was 'Princess and the Pea'. We watched the movie of 'Princess and the Pea' that came out a few years ago and the girls enjoyed comparing movie vs. musical. If you have a digital camera and can print out pictures from your computer, you can do this during the night, otherwise you can also do this in the morning after breakfast. It usually works out best if you pick your 2 favorite photos from the night, so every girl gets the same 2 photos and there's no fighting going on.

We told them about scrapbooking how the photo corners are used, etc. We also gave them construction paper and markers to write notes with, and they all went home with a completed scrapbooking page about our adventures. Girls went home with their scrapbooking page.  Some other favors could include dollar store journals, make-your-own snow globes, or decorating your own frames or ornaments. They sure had lots of fun and there was almost no clean-up involved! We hope this can help to inspire more ideas or to be a plan for your party.

PRICES: Limo rental varies. You may want to check the company's website for hourly rates or packages! Overall, the rest of the party was under $100. 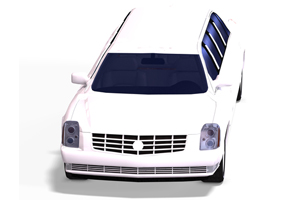