Golf Birthday Party  My son chose a golf theme for his 7th birthday.  Let me tell you, ideas/items are very limited for kids in the golf motive!  I finally found some really sharp looking cups and plates on the internet and used the colors in those (green, yellow, and red) as the color scheme.  I purchased plain yellow goody bags and had my son stamp them with a golf stamp in rainbow colors to fit the motif.

I created the invitations on the computer using a graphic of a golf course and a score card for the information.  I noted that there were water hazards and for guests to bring swimsuits since this was a pool party, and used golf terms such as event sponsor, course, tee time, etc., to give the guests date, time, etc.  I bought golf stickers in primary colors and had my son decorate each invitation individually.

I had a sheet cake airbrushed with green icing for the tee box area then used a real golf ball and tee along with ball markers for the decorations.  The edges of the cake were iced in green, red, and yellow.  Other food items included the ubiquitous pizza, chips and fruit platters.  Beverages were sports drinks.

Although this was primarily a pool party, I included one craft activity and three golf game activities.  As each child arrived, I had him/her make a guess as to the number of tees in a jar.  I had slips of paper preprinted with the golfer's name and then a blank line for his/her guess.

After the kids had been in the pool for about 45 minutes, I served the food.  Then, those who had finished eating made golf visors.  I bought inexpensive foam visors, letters, pipe cleaners, and small pom-pom balls for decorations.  When all the kids had finished, we held a putting contest.  As a golfer, I already had a practice putting mat, about 10 feet long, which I used for the kids.  The first child to hole 3 putts won.

Next, we had a chipping contest.  I had purchased Aqua-Golf, a pool chipping game which includes a large floating green and whiffle balls.  Players stand outside the pool and hit the balls to the green.  The first child to chip onto the green won the contest.  For both the putting and the chipping contests, everyone had to complete his or her turn before the winner was declared.  Had there been a tie, those players would have continued.

Finally, we had the pinata.  Since there wasn't a golf pinata to be found anywhere, either locally or on the internet, I made one from a large balloon and a paper towel roll.  The ball part was white and the paper towel roll, which was the tee, was red.  The kids loved it!  While the kids ate their cake, the awards were presented.  The contest winners each received a medal engraved with what contest he/she had won (great guesser, top chipper, perfect putter) the event (my son's birthday), and the date.

All other players received medals that read winner on them.  The medals came from Oriental Trading.  As each guest left, he or she was given one of the golfball stamped goody bags.  Items in the bag included a small game using golf tees (remove each tee by jumping another until only one is left), a golf ball and golf tee, a sports notebook and pencil, and some mini chocolate golf balls.  All the kids really enjoyed themselves and my son thought it was great. 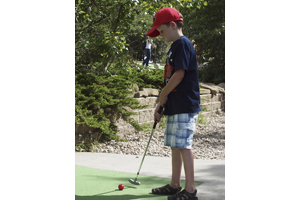