Music Party 13 Invitations: I cut out musical note-like shapes out of black posterboard.  On the round, circle like part at the bottom, I typed information and pasted it there.  I wrote, "Get ready to get up and move at NAME's AGE's Birthday Party!  The music will be pumping at ADDRESS at DATE/TIME to DATE/TIME (if it's a sleepover).  Please RSVP by DATE/PHONE NUMBER.  Please bring any of your favorite CDs!"  Then, I got gold star confetti and pasted some on the musical note and ta-da!  A simple, yet creative and cute invitation.

Decorations: I bought some posters of singers from the dollar store and used some of my own to put on the walls.  I also made more of the black musical notes and taped some on the walls and others I punched a hole at the top, strung gold string through, and hung them on the ceilings.  I used a black tablecloth, white tableware, and old CDs for coasters.

Food: Regular pizza for dinner and regular donuts from Dunkin' Donuts for breakfast.  The cake, however, was a round cake and I made silverish blueish frosting. I frosted it so it looked like a CD and then I made a smaller blue circle of frosting in the middle.  Then, with blue frosting, I wrote, "HAPPY BIRTHDAY NAME!"

Games: MUSIC BATTLE:  You put a bunch of words like love, night, or bear into a hat.  Then you separate into groups.  One group picks a word from the hat.  Say the word is love.  Then, both groups have 2 minutes to think of a song with the word night in it and a dance to go along with it.  They should also think of a backup song, because if the other group does that song, you can't use it.  At the end of 2 minutes, the group who picked the word does their performance and if they did a good job they get a point.  If a team did their performance badly, or they didn't have a backup song, they don't get a point.  First to 10 points wins.

MUSICAL MIX-UP: Before the party, think of about 10 or 15 songs and the person/band who sings them.  They should each have different singers/bands.  Put the songs and singers/bands on a paper, but put them into groups.  For example, all the songs could be at the top of the page while the singers/bands are at the bottom.  They should be in no particular order.  Form groups, and hand out a sheet of the songs to each group.  Each group has 3 minutes to match up the song with the singer/band.  Whoever does it first, and correctly, wins.

LIP-SYNCING CONTEST: Put about 15 or 20 popular song titles on pieces of paper and put that inside a hat.  Each girl, one at a time, picks a song and has to lip sync it to the rest of the group.  Whoever can guess what song the person is lip syncing then they win!

SONGWRITERS:  This game is similar to MUSIC BATTLE.  Guests form groups (these groups are going to sing.)  If some girls don't want to sing, they can be judges.  If you have no judges, that's okay and you can do it just for fun.  One girl from each group picks a word, like peanut butter or toliet paper from a hat.  Then, each group has 10 minutes to think of a song that's about that item and make up a dance to it.

MUSIC FREEZE DANCE: One person is in control of the stereo with a CD in it.  This CD should be a very popular CD so people know the words to the songs.  The girls start singing along to the song and then, the person by the stereo stops the music. If you are still singing after the music has been stopped, you are out.  The winner gets a prize!

Prizes: Prizes could be maraccas, stickers of music notes, or CD cases.

GOODY BAGS: We found goody bags with music notes on them, and we filled it with a CD of all the songs at the party, a CD case, and some candy.  I HOPE I HELPED YOU WITH THIS IDEA! 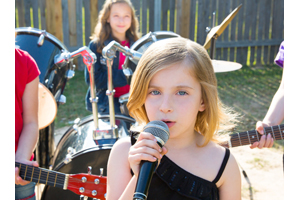