For my daughter's 4th birthday, our guests were a group of boys and girls of mixed ages, from 3 to 8, so we had to do something that would appeal to all of them. This fit the bill perfectly.

For invitations, we used a computer to create our own tri-fold cards which looked like pizza boxes with pizza inside. We used a long strip of paper shaped like three squares stacked on top of each other, with the folds in between the squares. On the outside we put a picture of the cover of a pizza delivery box on which we printed the words You're Invited in red letters. When you lifted the cover up from the bottom (like a flap), the inside flap had a picture of a cheesy pizza pie with toppings inside a pizza box and then when you pulled down that flap, the middle part had the party details. We used red and green (the colors of Italy's flag) tablecloths, plastic cutlery, and balloons and streamers to decorate the room, along with pizza design plates, cups and napkins that we ordered online.

Before the party, we prepared a batch of homemade pizza dough and left it to rise so it would be ready to use when the children arrived. We had disposable plastic aprons and homemade chef's hats we made out of poster board and large white paper napkins prepared for each child, which they put on when they arrived. We had bought small round disposable foil baking pans with came with covers (for taking home leftovers to show off), and we gave each child a pan (sprayed with nonstick cooking spray) and a piece of dough to make a personalized mini pizza pie inside their pan. We set out bowls of pizza sauce, shredded cheese, and a variety of toppings (spinach, peppers, mushrooms, olives, tomatoes, onions...) and each child covered their pizza with sauce, cheese, and whatever else they chose to put on it.

Then we baked the pizzas, along with some packaged frozen french fries. We used both our regular oven and a small countertop convection oven so we could bake more pizzas at a time. They washed their hands and threw away their filthy aprons, and while waiting for the pizzas to bake, the children used fabric markers to decorate actual fabric aprons that they could take home as a souvenir. Then we gave them each a pack of pizza-themed stickers with which to decorate a cardboard photo frame with Pizza Chef ____ (with their name) on it. All the materials were purchased cheaply online or at the dollar store. When the pizzas were done, we snapped a photo of each child showing off their creation, and then they all had pizza, fries, and soda. While they were eating, we printed out their photos and put them in the frames they had decorated. After eating, we opened presents.

Then it was time for pizza cake! I baked three thin yellow cakes in jelly roll pans and stacked them with white chocolate frosting in between. Then I trimmed the cake into a large circle. On top, I spread strawberry jam for pizza sauce, and sprinkled it with shredded white chocolate - the cheese. Circles cut from red fruit roll-ups with a small cookie cutter were the pepperoni, brown M&Ms were the black olives, and bits of red and green shoestring licorice served as pieces of pepper. We served it in pizza shaped wedges.

After cake, we had games. We played Hot Pizza - the same as Hot Potato, with the ball being called pizza instead of potato. Also Put the Pizza in the Pie - Pin the Tail on the Donkey using a big pizza poster with a slice missing from it, the children had to try to replace the missing slice while blindfolded. Then we played Pizza Man Says - like Simon Says, and some of the directions we gave the children were related to pizza making, such as pretend you're rolling out pizza dough,  biting into a hot gooey slice, burned your tongue on hot pizza, tossing pizza dough, etc. We were also prepared to play Pizza Bingo with the letters PIZZA instead of B-I-N-G-O on the boards but we actually ran out of time.

We didn't do goody bags, but each child went home with a chef's hat, personalized apron, picture frame with their photo from the party, and the leftovers from their personal pizza that was too much for them to finish (the covers of the foil pans came in handy for this reason). Everyone had an amazing time and it was truly a pizza-perfect party! 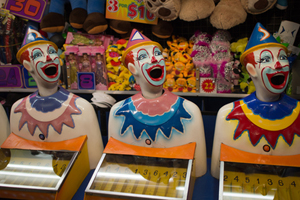