I am turning 11 soon, and I want to have a great birthday party that everyone will be talking about. I decided to have a pool party, but to top that, I wanted to have everyone sleepover outside, in a tent, in my own back yard. My aunt will give my the big tent we will use for about 18 girls!

INVITATIONS: I will print out about 19 invitations, stating when, where, and to rsvp. I will also put on it to bring a towel, sleeping bag, and clothes for the next morning. I went to the store and bought some cool paper with a cute border around it and balloons. It is much cheaper to make your own invitations than to buy them.

PARTY SNACKS, CAKES, and FOOD: The party will be around dinner time, so my parents will order pizza and chicken wings. They will also buy a couple different kinds of soda or juice such as sprite, coke, or lemonade juice boxes. We will have some potato chips and pretzels around the pool area too, just incase they get hungary. Every year, we have the food tables in the garage so it's easy to clean up and we have more space instead of the crowded patio. We will have ice cream and blue and green sprayed cup cakes or cake (which ever one).

ACTIVITIES and GAMES: At the beginning of the party, we will mostly swim and eat. But for fun, I decided to have a game all my friends and I know and love! The game is called Duck, Duck, SPLASH! It is just like duck, duck, goose. But to mix it up alittle bit, there will be a huge sponge dunked in a large tub of water and the person that goes around, says duck duck SPLASH. When she wants to get someone, she squeezes the sponge so that all the water splashes on someone. We keep doing this untill you want to stop.

We will also do an egg toss. It's a ton fun but caution: you may get messy! My mom will supply the eggs and pair up each of the girls equally with eachother. She will then give one girl (out of the paired) one egg. We will throw the egg around to eachother untill each one breaks and there is a winner that hasn't broke the egg. Each round, the girls will move back.

For presents, to make it fair, we are going to do something like musical chairs but with the presents. The music starts and each girl passes the present in a certain direction and when the music stops, the present I am holding is the one I open next. We keep doing this untill each present has been opened.  At the end of the day, we will set up the tent and sleeping bags and stay up all night, doing each others makeup, playing truth or dare, and playing a new game called spin the nail polish. To play the game, You have to get 10 or more nail polish bottles. Next, all the girls sit in a big circle. You spin the nail polish and whoever it lands on, that person would have to paint one toe/nail that color. You then keep going with the different color nail polishes until each person has all their toes/nails painted.

FAVORS: For favors, we will give the girls chap stick, goggles, and stickers or tatoos.    In the morning, my mother will hopefully make us all pancakes or waffles with orange juice or milk. All the girls will leave at 11:00 am talking and thinking about it for along time. *Thanks to this amazing website I found some new games and ideas, so hopefully you will find some in mine, too. Thank you! 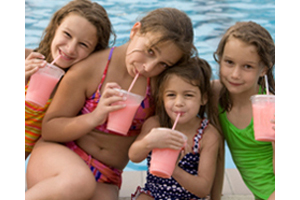