My daughter loves to color and do art project. So for her second birthday, we chose a Rainbow/Art theme.

INVITATIONS: I made the invitations on my computer and had them printed from a photo department. It was a sky blue 4x6 rectangle with pictures of my daughter in her birthday outfit (a rainbow tutu and a shirt that had a rainbow necklace with a number 2 in the center) playing outside. The font was red, except for her name, which was in alternating colors in rainbow order. The invitation said There is a sweet little girl who turns the gray skies blue, her name is Brooklyn and she is turning two! Followed by the party location and time.

DECORATIONS: The party was decorated in rainbow colors, but red, sky blue, and yellow were the main colors for fonts and tablecloths. We placed rows of helium filled balloons in rainbow order across our entryway table, the fireplace, and the half wall dividing our living room and breakfast nook. We hung colorful paper fans in rainbow order in front of the breakfast nook windows and above the fireplace. I made vases by hot gluing crayons around tin cans. These vases held colorful gerber daisies, the straws, pens, etc. In the dining room, we hung a sign Happy 2nd Birthday Brooklyn banner that I made on my cricut using rainbow striped paper. I also cut several rainbow with heart shaped clouds and little yellow suns that were used to label the food, drinks, activities, etc. I wrapped the forks in red napkins and used strips of different colored paint swatches as napkin rings. I found glittery rainbow polka dotted plates at Target.

FOOD BUFFET: We had a rainbow sign that said Sculpt your own Salad that I placed by an arch shaped white platter. I arranged the fixings for taco salad in rainbow order on the platter (red tomatoes, orange cheddar cheese, yellow corn, green avocado chunks, blue corn tortilla chips, and sour cream dyed purple). Each fixing was labeled with a wooden spoon on which I wrote the food’s name in coordinating colors. The meat and lettuce were in colorful bowls on either side. We also had Fashion your own Fruit Kabob. I placed fruit in rainbow order on another white arch platter to look like a rainbow. We placed skewers in a crayon vase near by. We had a Create your own Nachos buffet with chips in a plastic paint bucket labeled paint chips. We arranged the condiments for the nachos in rainbow order and labeled them with the wooden spoons like the salad.

DRINK STATION: We had a Design your own Drink sign with instructions on how to mix primary colored juices to make different colored concoctions. The juices Pomegranate Italian soda for red, Sicilian Lemonade Italian soda for yellow, and Blue Raspberry juice for blue.  We also had rainbow lemonade in a glass drink dispenser. We floated frozen fruit in the lemonade. There were also water bottles with the labels replaced with rainbow scrapbook paper. We had colorful cups (saved all the different color plastic cups from other parties and alternated them in a stack) and colorful crazy straws. For the kids, I ordered rainbow shaped cups with straws from Oriental Trading.

Desserts: I made cake balls and dipped them in different colored candy melts. I arranged these on paint palettes in rainbow order to be the paint blobs. I made crayons by dipping pretzels in the candy melts as well and wrapping them in crayon wrapper labels that I printed on colored paper. I made a 6 layer round cake with each layer being a different color of the rainbow. I iced it plain white cream cheese frosting and trimmed the bottom with m&m’s and skittles in rainbow order. I purposely made it plain on the outside so that it was a surprise when I cut it open. We also had iced sugar cookies in the shapes of rainbows, crayons, and paint palettes.

ACTIVITIES: As the guests entered, I had a little sign displayed in a frame that asked them to sign the inside cover of Brooklyn’s crayon book (The Crayon Box that Talked). In the breakfast nook, we covered the table in yellow butcher paper and had a sign that said Creation Station on a lazy susan wheel surrounded by colorful buckets filled with crayons, markers, stickers, glue sticks, and scraps of different colored streamers. The sign directed the kids to color on the table, color rainbow pictures, or make rainbow shakers (rainbow streamers glued to paper plate arches). We had a small table labeled Edible Art with directions to decorate cookies with food markers. The cookies were made to look like framed white canvases that were blank so the kids could decorate the inside. In the living room, we had a multi-colored play tent with tunnels for the kids to crawl in and out of. After a while, we moved the tent and got out one of those small colorful parachutes and played some games with that. We also had a rainbow piñata filled with fruit snacks and candy.

FAVORS/THANK YOU NOTES:  As the guests were leaving, they each got a package of skittles, which were wrapped in a label with a thank you message from the birthday girl. The kids also got rainbow crayons, which have the colors of the rainbow molded together so that when you rub it on paper, you can make rainbow designs. These were tied with rainbow ribbon.   The kids had so much fun doing the crafts and playing together. All the work was worth it to see the happiness on my daughter’s face when she woke up from her nap and saw her party. 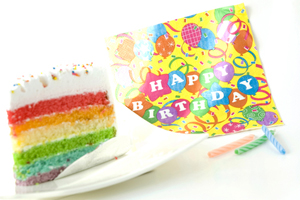