Rock/Pop Star Party - 8 years old  My daughter's 8th birthday was approaching  she had discovered the world of rock/pop stars and wanted to have a party based on that theme  however, she wasn't interested in dressing up and walking a runway, having karaoke, etc. So we set out to do a rock star theme without having to make our guests perform at the party.   Invitations: We found Invitations with a microphone/stars on the front at our local party store. Anything with stars on it would work though if you wanted to make something yourself.

Decorations: In front of the house, we drew stars on the side walk  I bought a large cardboard star decoration at the party store and then just traced around it. I did the stars in the colors of our party (blue, pink, purple) and inside each star I wrote a guest's name. I had a bunch of helium silver, hot pink, purple & blue balloons attached to a dowel in the front yard. In the backyard, we draped the fence with crepe paper and had balloons in silver, hot pink, purple & blue everywhere. I had a CD player playing a mix tape we made of Hillary Duff, Hannah Montana, etc. etc. If you were doing the party inside you could hang CD's from the ceiling along with cut outs of musical notes and guitars on the walls.

Activities: As each girl arrived, we had a back stage dressing room set up on the back porch. This consisted of a table with glittery hair spray, nail polish, eyeshadow and body glitter. I put the eyeshadow on with qtips  with a fresh q-tip for each girl. A helper and I did the girls up, and then when they were finished another helper took the girl's photo in front of a metallic curtain (from the party store) holding a sparkly microphone (oriental trading). We had a few metallic stars on the wall around the curtain for added decoration. We used these photos with our thank you notes.   Food: I set out on a table a bowl of popcorn, cups and a pitcher of water.

TELEPHONE  where you all sit in a circle and one person whispers something to the person next to them, and so on, until the secret goes all around the circle. (We were testing our ears from the loud music rock stars hear when they are on stage all the time).

BUTTON BUTTON WHO's GOT THE BUTTON (with a star shaped button).

THREAD THE SNAKE RELAY BUT WITH A MICROPHONE  I took two microphones (toy ones from oriental trading) and taped a very long piece of yarn to each. The girls divided up into teams and each team had to thread the microphone and it's cord (the yarn) thru their clothes and then pass it on to the next person.

TUG OF WAR  we kept our two teams and the girls did a tug of war with a rope (pretending it was a microphone cord).

FREEZE DANCE - dance to music  - when the music stops all the kids must freeze.

BALLOON POP  I had already blown up a balloon for each guest (plus several extra) and had tied a string to each with a slip knot. These were placed on each girl's foot while they were sitting down. On the count of 3 the girls hopped up and ran around the yard, each trying to pop everyone else's balloon without their balloon getting popped.

PARACHUTE  tossed bean bags on a parachute  if you don't have one, you can use a large sheet. If you have lots of back yard parties, you might invest in one from oriental trading.

ARE YOU HUNGRY  We play this at all parties, regardless of the theme. My husband is the monster, and all the guests are on one side of the yard. We say Monster Monster are you hungry? And he'll say No, come closer. We do this several times and then he says Yes!! I'm hungry and he chases us all and tries to catch us (he never does but it is fun to be chased!)

ROCK ROCK STAR (same as Duck Duck Goose).  I always plan many more games than I need. That way if a game isn't quite working, or if we have time to kill, we have plenty to do.

Cake: After games we gathered for cake and ice cream. The cake was star shaped with little silver CD's on the top. The outside of the cake said things like rock star, etc. It was hot pink and purple. The plates and napkins were hot pink, blue and purple with the microphone and stars on it (to match the invitations). For extras I just bought plain blue napkins and plates.

Yarn Maze: My daughter wanted to do something different from a pinata. Before the party, I bought several colors of yarn. I then took a string of the yarn and started at the gate to the side yard, and then draped it over this fence post, around this pole, etc. etc. I did this over and over in the different colors of yarn  a string of yarn for each girl. The strings were going everywhere, crossing over and under each other. At the end of each string I had a card that said You did it! Backstage Pass.

When the girls had gone thru the maze of string to gather up all that was theirs they brought the string and tag to me and I gave them their favor bag. You should do this in a side yard, garage or some place where the girls can't get into it, because they saw the maze and couldn't wait to find out about it.  In each favor bag (a bag covered in stars) we had an inflatable guitar, a chenille slap bracelet, Bracelet tattoos and an assortment of candy. My daughter also loves Mad Libs so we created our own about her birthday and included it in the favor bag.

Thank you notes: We put a copy of the picture we took of each girl after her time in the dressing room and taped it to a sheet of cardstock, and then my daughter wrote a thank you message on the other side.   It was a Rockin' time!! Her friends left telling us this was the best party ever! Thanks and have fun. 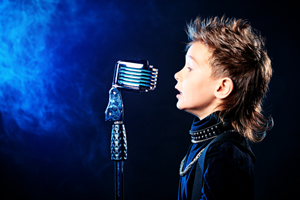