For my daugther's 8th birthday, we decided to do a scrapbooking party.  As I am an avid scrapbooker, it was perfect and easy for me.  I first started out by making 8 different invitations for each of her friends.

The invitations were made in the shape of a scrapbook page with pictures of my daugther and all the necessary information (the parents loved them and though they were really original).  I told the girls they each had to bring 6 pictures that they can use for the party.

Since we had just moved into a new neighborhood and her friends were not quite familiar of the whereabouts, I took a 4 x 6 piece of plywood and covered it with patterned material so it would look like a piece of paper.  Then I blew up pictures of my daugther which I glued on the board and made it look like a giant scrapbook page with embellishments and all the trimmings... I left a big enough space so when her friends arrived, they could write something funny or cute about my daugther and sign their names.

I took a picture of each girl next to the giant scrapbook page and sent it to them in a thank you card afterwards.  I had also decorated the house with scrapbook pages of my daugther on the walls that I had made to give the kids an idea of what scrapbooking was all about.

Before the girls arrived, I had prepared ascrapbook starter kid for each one of them, which I purchased most of the items at the dollar store.  The kid included a 8 x 10 album, scissors, glue, punches, stickers and embellishments which i put in a bag which I also decorated like a scrapbook page.  The girls had finally all arrived.

For lunch, I did something special.  I had a pizza bar.  Each girl was given an 8 inch plain pizza (dough only). They headed for the pizza bar which I had set up in the kitchen with all kinds of different types of toppings, like pepperoni, cheeses, vegetables, bacon, etc. once they were done, I tossed the pizzas in the oven.

For the cake, I made a cake in the shape of a book and I decorated it with scrapbook embellishments made out of icing.  Afterwards, she unwrapped her gifts and the scrapbooking began.  All the girls received their starter kits which was also their favor bags to take home I had set up some work stations with different types of technics.

I explained to the girls the concept of scrapbooking and they went off making their own pages using their imagination.  I had set up a few tables with scrapbook extras that I had i.e. slicer, stickers, embellishments, crayons, punches, etc. etc.  I had prizes for the best scrapbook page, the most original, the most funny and the most fill-up pages.  At the end of the day, each girl ended up being a winner.

We scrapped for over 3 hours non stop the girls couldn’t get enough of it.  One on one, I sat down with each girl and showed them how to do a few technics such as embossing, how to mix and match pages, colors, etc etc.  I took tons of pictures of the girls scrapbooking, making their pizzas, etc. etc.  They really had a great time and were sad to see it end. 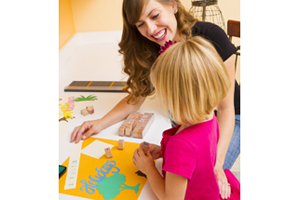