My daughter recently turned sixteen. She is our oldest, and we had no idea what she wanted to do, except that she didn't want a surprise party. So we talked about possible ideas, but she admittedly stated she didn't want anything corny or tacky, something somewhat more sophisticated than past birthday parities, but still fun for her and her friends. She decided she wanted to have a multi-faceted party, moving from a restaurant to our house.

She chose Rich and Charlies, for those of you who don't know, that's a pasta restaurant, atmosphere is rich in Italian accents and Opera music, very thematic. Then back at out house she planned to have a birthday cake, and then have rented some movies to watch in the gameroom, and also bought snacks and sodas. Then later when they wanted to more relax and talk or lay down, they where going to go into her bedroom, which would be turned into a virtual bed as the floor. (Before the guests arrived, which means you'd have to do this before you left for the restaurant)

We'd put several mattress' covering the width of her bedroom floor. 3 single mattress' and one Queen mattress would make her floor a cushy place to sleep and talk in. This way all the girls could sleep in one room, and all have the same comfort level, no one on the hard floor. We moved her bed frame out of the room, and most of her furniture in next to the wall anyway. she also has a TV/dvd player in her room, so entertainment isn't a problem. She invited 5 other girls, we had to make somewhat of a restriction of guests due to prices at dinner.

The invitations where made on her computer and printed on thick canvas paper, can be purchased at a local art supply store. There was no special reason for thicker paper, except that it looked nicer than plain paper. Another small touch that turned out very cute was buying numerous cameras. We bought a lot of cameras and took a lot of pictures at the restaurant, and then gave the girls the cameras to play around with and take pictures thoughout the night. Then that morning we got up early and took the cameras to one hour developing, and while they were being developed we stopped by Krispy Kream to get donuts. (A few days before we'd bought cheap photo albums at the dollar store, one for each guest, and the day of the party we'd gone to the florist at Dierbergs to get pink roses.)

When the girls woke up they had the donuts and as they ate we went into another room with the pictures and picked out cute pictures from each roll and made an albums for everyone (note: its good to get a lot of cameras, b/c then you have a lot of pictures, and can keep one of every double.)

As the guests left later on we gave them each an album (on the front in glitter written "Anne's 16th") and a pink rose. They all thought the albums where adorable, and not cheap looking tacky gift bags. It actually was relatively cheap to do though. And the left over roses? Given to our daughter of coarse!   -Some important touches we had:

We got her cake at Schuncks Bakery, a local grocery stores bakery. It was Marble cake, with White icing that said "Happy Sweet Sixteen Anne" in light pink icing, and pink and lavender roses and bordering. It was lovely, and very good.

Her decorations weren't tacky or overdone, as she wished. We got balloons in pink and lavender at Party City, and bought a "Happy Birthday" Banner, and Pink candles there as well.

The dining room table we ate cake at was decked out to the nines-- at cost nothing to do. We used crystal plates and cups, that we owned. Then we used pink cloth napkins, and a nice white table cloth. We used the good silverware, and the centerpiece was pink roses and balloons. (of coarse don't risk your good silverware or crystal if your guests are rowdy, or if you can foresee a mishap with your kids friends!)

The gameroom got the same decorations -- balloons and a banner. Hey, the way we saw it, less is more. Our daughter was very adimate about NOT having an overdone and tacky, childish décor or party.   In closing, all the guests loved the food at R & C, and all we heard all night was laughter and talking radiating from the gameroom, and then from her bedroom. She loved every minute of it, and it wasn't that big a dent in our budget. She also got her wish, it was a more sophisticated atmosphere at dinner and at home, but at the same time a funfilled night. She now as many pictures to remind her of her fun times, and a very memorable birthday party. 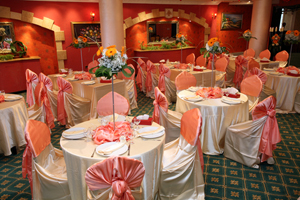